Bitcoin and the entire crypto market have been caught in the throes of an intense recovery over the past few days, with the recent selloff proving to be highly fleeting.

The market’s potent response to this intense decline indicates that some serious upside could be imminent in the days and weeks ahead.

Any extension of this momentum could result in the cryptocurrency seeing fresh all-time highs.

Late-last week, Bitcoin rallied into the mid-$19,000 region before facing a firm rejection that caused its price to slide significantly lower.

The selling pressure seen here has been intense, and it remains unclear as to whether or not bulls have enough strength at the present moment to break above this level.

If BTC can break above its previous all-time highs, it will likely enter price discovery mode and extend its current parabolic uptrend.

A further rejection here, however, could mean that a prolonged consolidation phase is imminent.

BTC is About to See the Highest Monthly Candle Close Ever

Assuming that Bitcoin remains technically strong and doesn’t face any harsh selloff over the coming day, the cryptocurrency is poised to post its highest monthly candle close ever.

As one analyst observed:

“BTC / USD: This will be the highest monthly close of all time, monthly candle is currently +35% above the previously ATH close. I would expect anything below $16,500 to be bought be up extremely aggressively, on anything less than the 1W.” 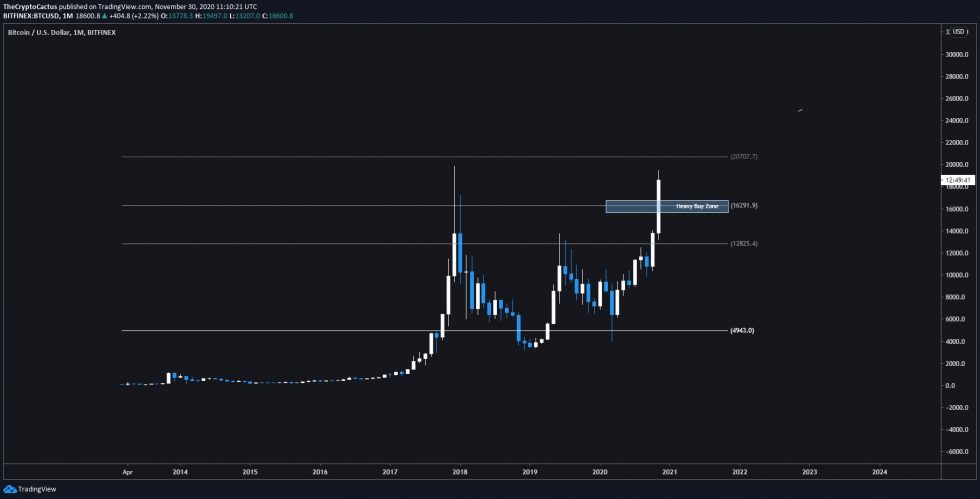 From a macro-perspective, this is an incredibly bullish sign, as it indicates that the cryptocurrency’s long-term outlook – as well as its short-term outlook – are bullish.