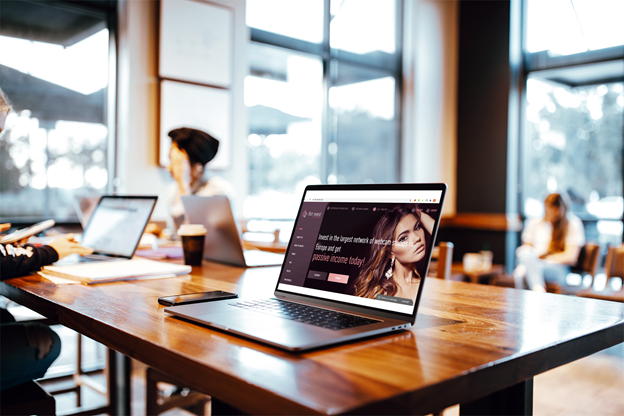 As a part of our ongoing quick interviews, today we are interviewing Brandon West, a crypto enthusiast, philanthropist, co-owner of Flirt Studio, the largest network of webcam studios in Europe, and founder of the Flirt Invest platform.

Brandon: Hello, Katie, I see that you do not stick to the traditional rules in your work, I’m the same.

Well, the fact is that I used to work in the police, namely, I was the head of the department responsible for combating cybercrime. Those crimes were not common, though, since the Internet was not a mass phenomenon, and we were capable of finding everyone. Now to find out everything about a person, you just need to find his social media. From that, you’ll already know what he is fond of, where he lives, who are his friends, etc. It’s funny that a lot of people don’t understand that they tell everything about themselves. I’m personally not a very public person. I don’t use Instagram or whatever else is there, plus the sphere of our business, of course, also plays its role.

Reporter: Got it. How did you get into this field?

Brandon: Accidentally, to be honest. The fact is that after my career in the police, I also worked in a private company, in fact, doing the same thing. I was earning quite a lot. It was in the late 90s, you know, the boom in IT, I saved most of it, later I also manage to solve a house of one deceased relative of mine and started thinking about where to invest my capital. I happened to meet one of my acquaintances from college, we got into a conversation, he knew what I was doing and decided to clarify how safe it was from a technical point of view, and he told me about this industry. Back then it was just the beginning. He said that he knew how to do everything and that he was just looking for an investor. I didn’t think twice, the whole Internet was developing at the light-speed right before my eyes and I saw the potential of the industry.

Reporter: It’s not the first time I hear this ‘it happened accidentally’ kind of story. Is it only about luck? Or are there any other success factors?

Brandon: The universe gives opportunities to everyone every day, even the one reading this interview will get an opportunity to apply this information, the fact is that many people don’t take advantage of the opportunities that life gives them, they may lack grasp.

Reporter: Yes, I couldn’t agree more. I was always wondering who are these people sending money to models? After all, they will never even see them, why do they donate huge sums to models that they just see on the screen? With girls everything is clear, it’s easy money for them, but what motivates men to send money?

Brandon: It’s not even about some kind of porn or erotica, as many people think, but psychological contact and communication. I mean, many people see nothing but their offices and the 4 walls of their apartment. Many, especially those living in big cities, are burnt out, many are tired of their wives, but they don’t want to cheat – webcam sites solve all these problems, it’s like some other reality which men resort to in order to run away from their problems. Just as many people spend a lot of money on computer games and buying virtual things in them, they just go away from this reality.

Reporter: I understood you, in fact, as I got it, you are also a fan of cryptocurrencies. Tell me, what do you think about their future? Perhaps you can share what coins you bought, or projects that you personally believe in?

Brandon: Yes, that’s right. I believe that bitcoin is the future. Cryptocurrencies are the fastest growing technology in entire history. The number of Bitcoin users is growing faster than the number of Internet users. I also think that some of the projects behind the technology will also remain. For instance, Ethereum, Cardano and possibly a number of others. This is similar to the IT boom I saw in the 90s. I’m very inspired by Michael Saylor and what he does at MicroStrategy. I personally invest in 15 projects, they are all in the top-100 CoinMarketCap. But this is not for everyone, there are risks in the long term. If you’re a newbie in the cryptocurrency world, I advise you to buy BTC and ETH for the start.

Reporter: Correct me, if I’m wrong, your company is now giving investors the opportunity to invest cryptocurrencies in Flirt, right?

Brandon: Right, you see, we’re already making the most of this opportunity. Due to the specific field of our company, we cannot sell shares. Thanks to cryptocurrencies, we can attract investments and grow very quickly, and our investors can earn a nice percent from us. It’s WIN-WIN. Flirt Invest now accepts Bitcoin, Ethereum, Litecoin, Binance Coin and recently we have started accepting USDT stablecoin.

We’re planning on adding a few more in the near future.

Reporter: What about the safety of investors? Are there any hidden risks?

Brandon: We have an officially registered company with a registered capital of 1 million pounds, an official site. All payments go through a payment merchant, which provides safety. If you’re talking about the sphere, it’s growing every year, and even stronger due to Covid-19. All these men stuck at home wanted some entertainment.

Reporter: What’s next? Also, since you are investing in bitcoin, what is your personal forecast for its price by the end of 2021?

Brandon: We surely have plans to grow further. We’re opening new studios, there is a lot of work, and now, thanks to the attracted investments, we will start growing even faster. As for the price of bitcoin, of course, I am quite optimistic. In my opinion, it’ll reach at least $100,000 by the end of the year, perhaps by the beginning of the next.

Reporter: Thank you! Thank you for your time

Brandon: Thank you for having me.