Bitcoin has just broken through another major price threshold. Here’s a look at what just happened and what comes next.

Only yesterday, we were writing about how Bitcoin had broken the $13,000 mark and was carving out fresh all-time highs on the back of record volume in the market. Fast forward less than 24 hours and two more major psychological resistance levels have been broken – first $14,000 and, as of early morning in the US on Thursday, $15,000. 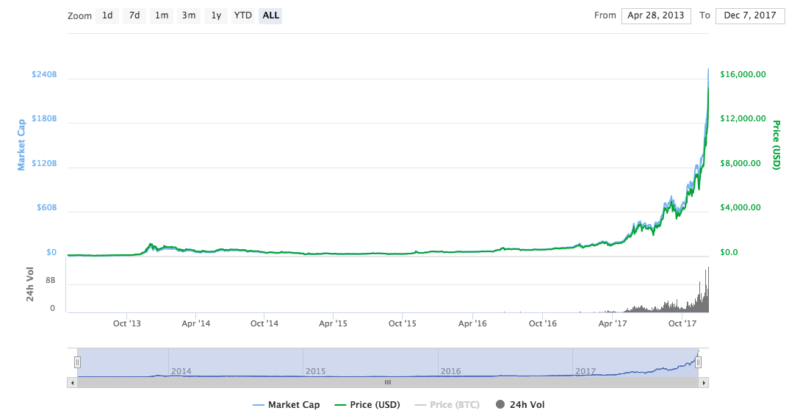 As listed on CoinMarketCap, Bitcoin currently trades at a little over $15,300 a piece – up 17.72% over the last 24 hours and commanding a market capitalization of more than $256 billion.

To add some perspective, McDonald’s Corporation (NYSE: MCD) currently trades at a market capitalization of $140 billion.

So what’s driving the action?

In a word, sentiment.

When you get an asset moving to the degree that we have seen Bitcoin move over the last couple of weeks, it brings with it a dramatic inflow of bullish speculative buy-side volume and, as each fresh high breaks, this volume increases, and the process repeats.

Combine this with the fact that Bitcoin is now commanding top billing across pretty much every major news media outlet in the world and very little is needed to stoke the fire.

Where Does Bitcoin Go From Here?

There is a strong chance we will get some degree of correction as the shorter-term operators pull profits off the table (who can blame them) but even those entering at current levels are likely doing so – for the most part – on the back of a buy-and-hold thesis.

Further, once any such correction is in place, we’ll almost certainly see some increased speculative loading as longer-term holders take advantage of discounted entry levels in order to bolster their existing positions ahead of what they deem as a certain return to the overarching upside momentum that’s dominated price over the last few months and more.

The next big test will be the introduction of futures into the market and we will really start to see the impact of this introduction early next week. Markets have to keep in mind that futures access will make it a lot easier to go short on bitcoin than is currently the case but, at the same time, it will also open up the possibility for large institutions to take long positions without having to take delivery of the underlying asset.

As such, the balance between these short and long operators is going to be key as far as determining impact is concerned.

What do you think about the latest price run? Can we hold above $15,000? Will a futures market impact sentiment? Let us know below!