According to new research from CB Insights, blockchain venture capital is on track for a 60% decline when compared to 2018 figures. With Bitcoin price on the rise, it’s fair to suggest that blockchain startups are out this year and Bitcoin is back in.

One of the great things about Bitcoin is that even critics could generally see value in its underlying blockchain technology. The ‘Blockchain not Bitcoin’ mantra was repeated often and everywhere, much to the chagrin of Bitcoin maximalists.

As bitcoin price exploded through the second half of 2017, everything blockchain related came with it. Then, during the crypto-winter of 2018, as people exited bitcoin in droves, DLT technology was the thing to cling on to. Bitcoin was just one tiny application of the nascent fintech.

Alibaba CEO, Jack Ma, claimed that, although Bitcoin was a bubble, blockchain was not, and his company would focus solely on blockchain. Even the notoriously crypto-hostile Chinese government wanted to dominate the blockchain scene.

While ICOs were falling out of favour, and cryptocurrencies were shedding value like it was going out of style, venture capital investments in blockchain startups hit a record high of $4.1 billion in 2018.

Bitcoin Bounces Back While Blockchain Bombs

Bitcoin’s rebound from December 2018 lows has come at a time when new data suggests investment into blockchain startups is dropping. The the first half of 2019 saw just 227 deals between traditional venture capitalists and crypto startups. According to CB Insights, the level of investment has totalled just $784 million. 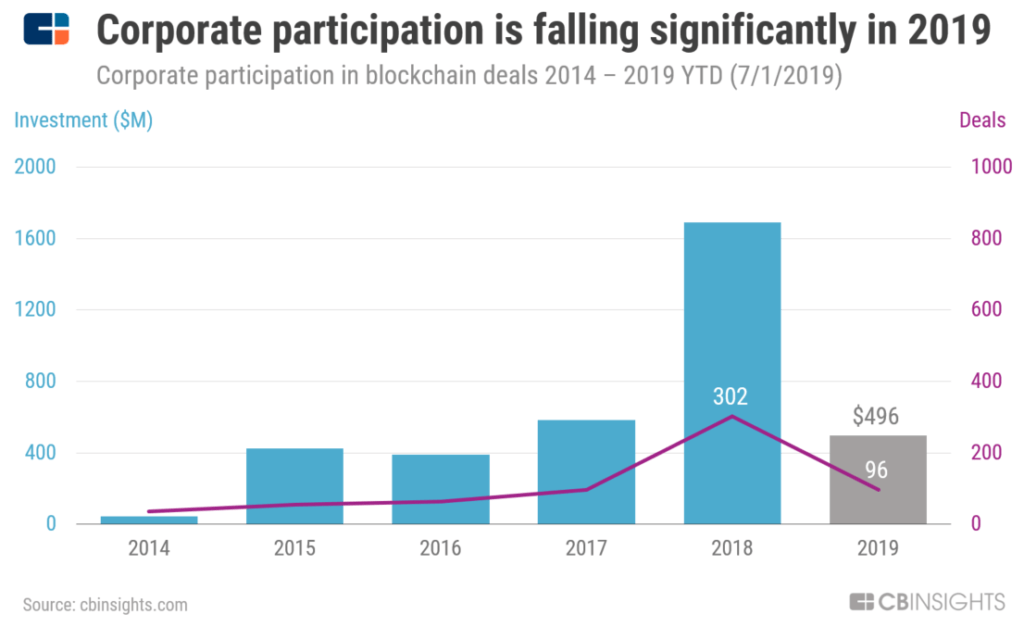 That would give a projected figure for the whole of 2019 of around $1.6 billion, representing a drop of over 60% on 2018 levels. Further insights from the report suggest that inflows of cash from corporations are on ‘an even sharper decline,’ and that ‘a growing share of [the investment which is happening] is going to early-stage startups’.

ICOs have been out funded by venture capital for four straight quarters, although both are declining. Meanwhile increasing BTC price [coin_price] and market cap suggests renewed interest in the space.

So it seems we are back to ‘Bitcoin not blockchain’, which will keep the maximalists happy, at least.

Future Outlook For BTC and DLT

There is certainly an increased sense of optimism in the cryptocurrency space, with keystone currencies like Bitcoin and Ethereum seeing speculation and volume surge in recent months.

Corporate interest from the likes of Facebook, Visa and JP Morgan has seen renewed enthusiasm, giving the blockchain space a second wind.

This is likely to also be good news for startups, who are well positioned to help larger corporations and institutions enter the market. Whether that spells a renewed interest in venture capital, however, remains to be seen.

What do you think of these latest findings? Let us know your thoughts in the comment section below!