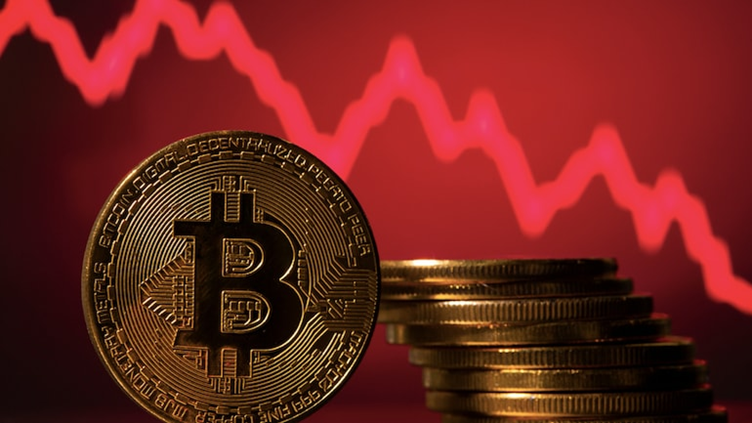 Bitcoin (BTC) begins its first full week of 2022 in familiar territory below $50,000. Since the end of December, 2021, bitcoin has experienced several declines of varying degrees. On Jan. 5, it even plunged to below $43,000, plummeting near 10% within only 8 hours. Bitcoin is finally making some big moves and we can expect the next few days to be highly volatile.

The cryptocurrency market sentiment which has been displaying extreme fear intensified after a prolonged period of sluggish performance and the recent plunge. Crypto Fear & Greed Index has changed from 24 yesterday to 15 now (the lower the index, the more fear).

What comes with the downtrend moves and fear sentiments are a series of bad news:

The U.S. equities markets pulled back at the closing bell after minutes from the Federal Reserve’s December FOMC meeting showed that the regulator is committed to decreasing its balance sheet and increasing interest rates in 2022. As stock markets corrected, BTC price followed suit by dropping below $44,000, setting off a cascade of liquidations that reached $222 million in less than an hour.

“Bitcoin will be volatile in this period, both an effect of stock market volatility, but also from sharp Fed course corrections”, Charles Edwards, founder of asset manager Capriole, noted in a series of tweets on January 3rd.

One after another crypto regulatory policies make bitcoin prices facing more severe challenges. As one of the world’s biggest crypto mining countries,  Iran is shutting down crypto mining centers again to reduce liquid fuel consumption in power plants amid decreasing temperatures. Meanwhile, Kosovo joins Kazakhstan, Iran, and Iceland in imposing restrictions on Bitcoin mining due to overloaded energy grids. Besides, members of Parliament in the U.K. are pushing for increased regulatory oversight of crypto assets this year and South Korea’s National Tax Service announced that from January 2022, citizens were required to pay tax for the cryptocurrencies payment.

On Wednesday, Kazakhstan, the second-largest country in the world when it comes to Bitcoin mining hash rate, experienced unprecedented political unrest. The state-owned Kazakhtelecom shut down the nation’s internet, causing network activity to plunge to 2% of daily heights. The move dealt a severe blow to Bitcoin mining activity in the country, which accounts for 18% of the worldwide Bitcoin network’s hash activity. As per data compiled by YCharts.com, the Bitcoin network’s overall hash rate declined 13.4% in the hours after the shutdown from about 205,000 petahash per second (PH/s) to 177,330 PH/s. It undoubtedly has a great impact on global bitcoin mining. 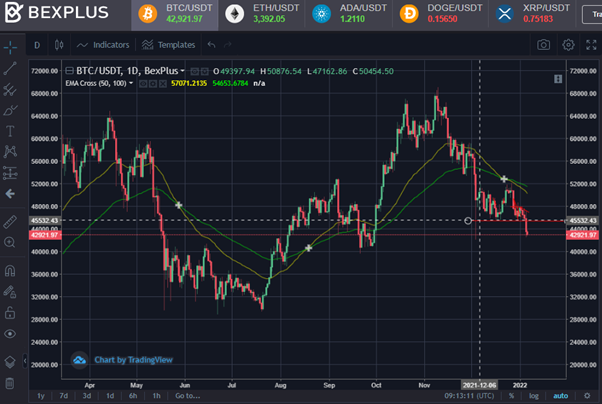 From the daily chart of the BTC/USDT pair, the BTC price has hovered around $45,000 for a long time. After breaking through this price, Bitcoin has continued to fall. EMA (Exponential Moving Averages) Cross had a death cross on December 22, which was almost a forecast of the BTC price plummet during this period. All in all, BTC has totally fallen by 37.5% from all time high of $68,000 to the current price of $42,500. Most analysts considered that it had entered a bear run.

How to Profit in the Bear Run?

How does 100x Leverage Work?

Bexplus is a leading crypto derivatives trading platform offering 100x leverage futures trading on various trading pairs: BTC, ETH, ADA, Doge, XRP, etc. Bexplus doesn’t require KYC and is popular among over one million traders from over the world. In addition, it is safe for being accredited by MSB (Money Services Business).