Bitcoin has been largely trading sideways throughout the past few weeks. Both bulls and bears have been unable to gain any firm control over the cryptocurrency’s price action as it bounces between lows of $30,000 and highs of $40,000.

Where the entire market trends in the mid-term will depend on which of these trading ranges are broken first. Flipping $40,000 from resistance to support would go a long way towards aiding in a continuation of its macro bull trend.

One analyst believes that this possibility will come to fruition in the near-term. He specifically thinks that a large triangle pattern BTC has formed will also result in a breakout, sending it soaring higher.

Yesterday, Bitcoin rallied higher during mid-day in the U.S., setting highs of $38,000 before its momentum stalled and it began drifting lower.

The selling pressure within the upper-$30,000 region has remained quite intense throughout the past several weeks.

The decline sparked yesterday quickly turned from a slight move lower to a full-fledged selloff that liquidated over-leveraged positions and cleared the crypto’s downside liquidity.

Bitcoin is now sitting around $35,000, trying to flip this level back into support.

One analyst mused the possibility that Bitcoin is currently trading within a large pennant formation, with the overnight decline marking a test of the lower boundary of this historically bullish pattern.

“BTC 4h: Imo there is no reason to speak about a bear market. We are about to hit a 5 weeks trend line support. Even if we lose it we are still inside of the more important bullish pennant,” he said. 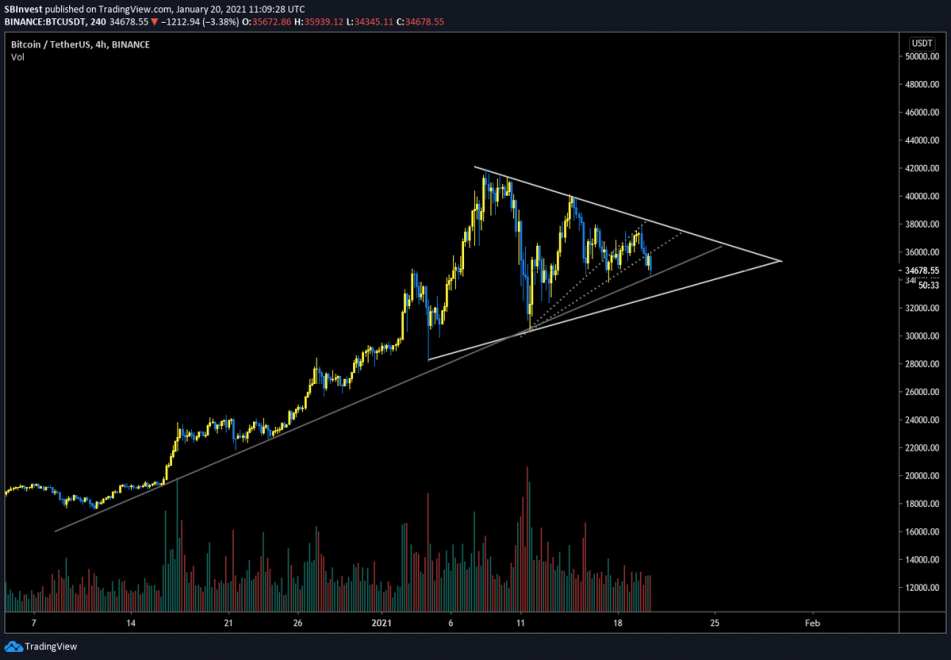 When this pennant does break, it will likely cause Bitcoin to see a hard and swift movement in one direction or another.