Bitcoin Potentially the Most Lucrative Trading Investment Since Amazon

Gordon Scott at Investopedia writes that Bitcoin is comparable to how Amazon was treated during the Dotcom boom.

Even by the start of 1997, everyone knew Amazon had a great idea, but no one could fully explain how much its shares should be worth.

It is that very problem that Bitcoin now faces. Everyone realizes that it is a great idea, yet it is hard to fully grasp exactly how much it should be worth. Bitcoin’s primary use as a monetary is well known, but the actual technology and its potential applications are still a great mystery to many.

Amazon faced the same problem as it took new approaches to distribution and supply chain management. Interestingly, Amazon initially started in the book sector and, while it dominates that market to this day, it has since evolved by several orders of magnitude to be the giant that it is today. Gordon further explains:

Investors were not able to fully and accurately quantify Amazon share value at first. Can you blame them if it was hard to analyze the idea of using supply-chain management software to create a virtual book warehouse and factory outlet mall synthesized into a single website?

If we take a look at Amazon’s market valuation back in its 1997-99 cycle there existed the same degree of price volatility that Bitcoin has experienced, at least in it’s 2016-17 period which has seen a much steadier rise as a result of actual widespread investor speculation. 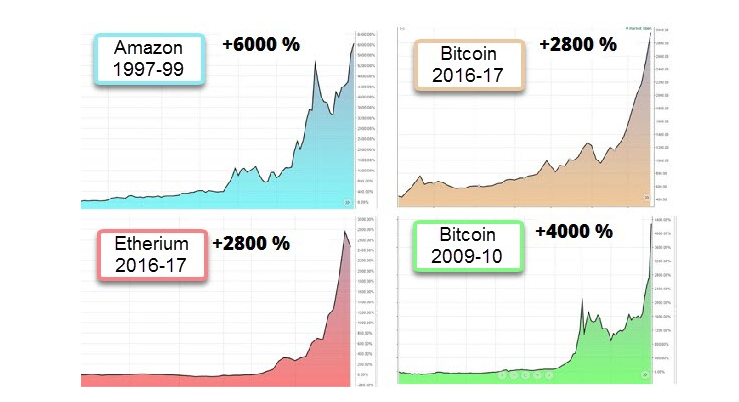 It is the cryptocurrency’s volatility that makes it such a potentially highly rewarding trading investment. The price swings, while hopefully not terminal (as they became after 2010), offer the trader many opportunities to take profit and reinvest. As long as Bitcoin continues to follow the price trends set by Amazon, its traders can potentially continue to make a very lucrative trading investment with the coin.

As can be seen in the charts above, the dotcom boom parallels the current state of cryptocurrency. Furthermore, as other altcoins emerge to stand up to rival and compete with Bitcoin, there exist the same issues of fluctuations in price.

These same issues were present in 1997, except that some companies went on to continue rising as others crashed with the bursting of the dotcom bubble.

Sue Chang at Marketwatch posted this chart (below) which puts the current size and value of Bitcoin into perspective: 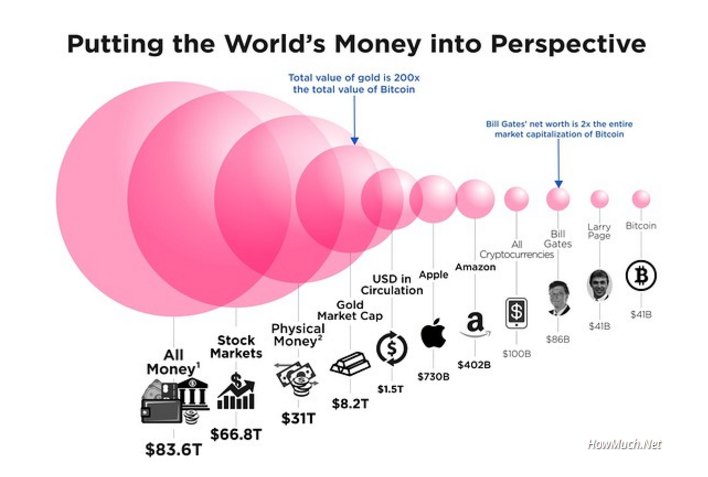 As illustrated above, Amazon currently stands at a value of $402 billion, with Bitcoin already sitting at a $41 billion market capitalization. Given this, it’s not hard to get a sense of the size of the cryptocurrency’s current projected value and there is a great deal of market confidence in the coin to have reached this stage.

While many see Bitcoin as being in a bubble, and there may yet be many more volatile dips to come, it is worth remembering that companies such as Amazon suffered also from this market volatility. Volatility, while not desirable in a currency, could just be a sign of Bitcoin and its technology truly finding its feet among its fellow market giants.

Will Bitcoin fulfill its promise as the most lucrative trading investment? Let us know in the comments.