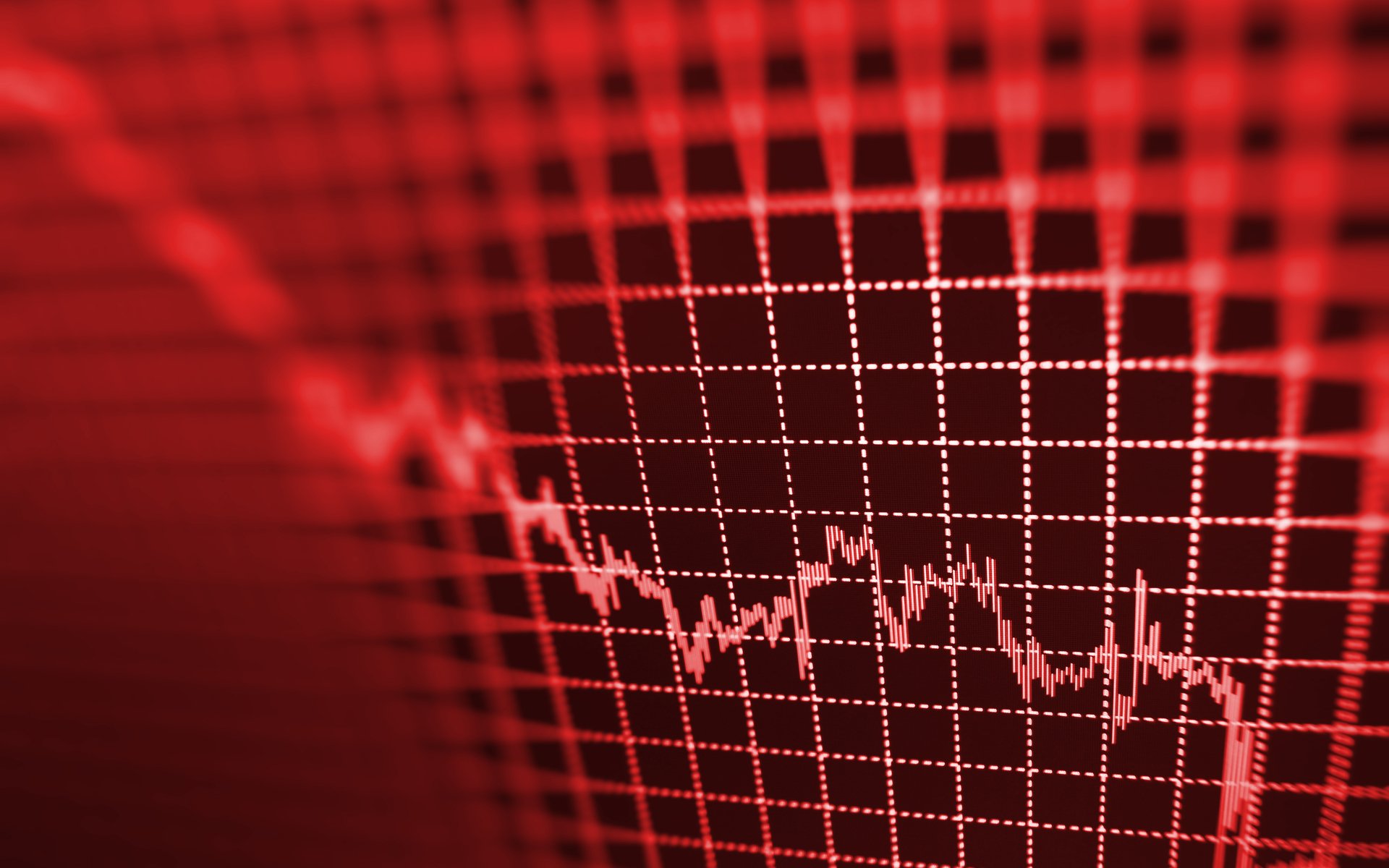 Is contagion from India’s Zebpay flash crash to $5,700 responsible for the pullback in bitcoin price or something else in the works?

Up till yesterday, BTC [coin_price coin=”bitcoin”] traded within a narrowing triangle, leaving investors guessing which side the cryptocurrency would choose but as a third attempt to surpass $6,800 failed, BTC briefly reversed back below the $6,700 support and $6,600 protected against further decline.

Generally, the king of cryptocurrencies has been in a downtrend since dropping out of the ascending wedge on June 4th, but there are other factors that could be contributing to the current pullback.

This week’s $30 million Bithumb hack appears to have had limited impact on BTC price and its not yet clear whether or not the threat of accelerated regulation from the South Korea government is impacting cryptocurrency prices.

It seems that BTCs pullback can mostly be attributed to a flash crash in India that occurred as Zebpay exchange informed users that they will no longer be able to process deposits and withdrawals after July 5th. On the other hand, the Mt.Gox whale has promised to not liquidate more BTC [coin_price coin=”bitcoin”] and BCH to compensate victims of the Mt.Gox hack and if this is to be believed this could be good news for the future stability of BTC price. 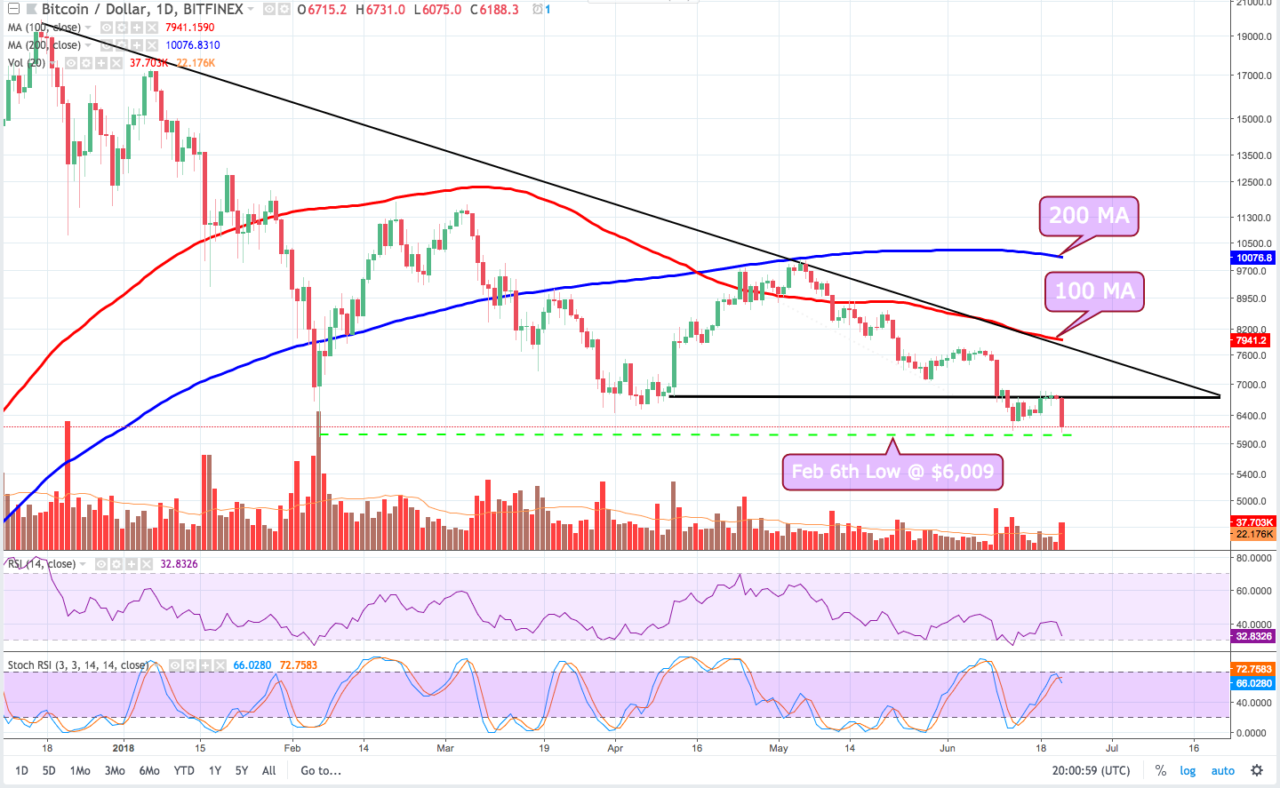 Earlier in the week bitcoin had recovered well from its recent swing low at $6,100 and spent the remainder of the week struggling to overcome strong resistance at $6,800.

Bears have clearly reasserted control as bitcoin dived below the ledge at $6,750 and descended as low as $5,914 on Bitfinex. At the time of writing, BTC gravitates somewhat indecisively around $6,100 and closed roughly 9% down for the day.

The 100 MA nearly aligns with the descending channel at $7,900 and sits far below the 200 MA. The RSI appears set to dip into oversold territory while the Stoch lines have crossed and appear headed into bearish territory.

One interesting feature worth noting is volume. With each sharp pullback, selling volume has decreased significantly which could indicate exhaustion on part of sellers. BTC appears to sell off as it approaches key resistance levels and the somewhat reliable method of buying and selling on oversold Stoch and RSI is proving less effective. 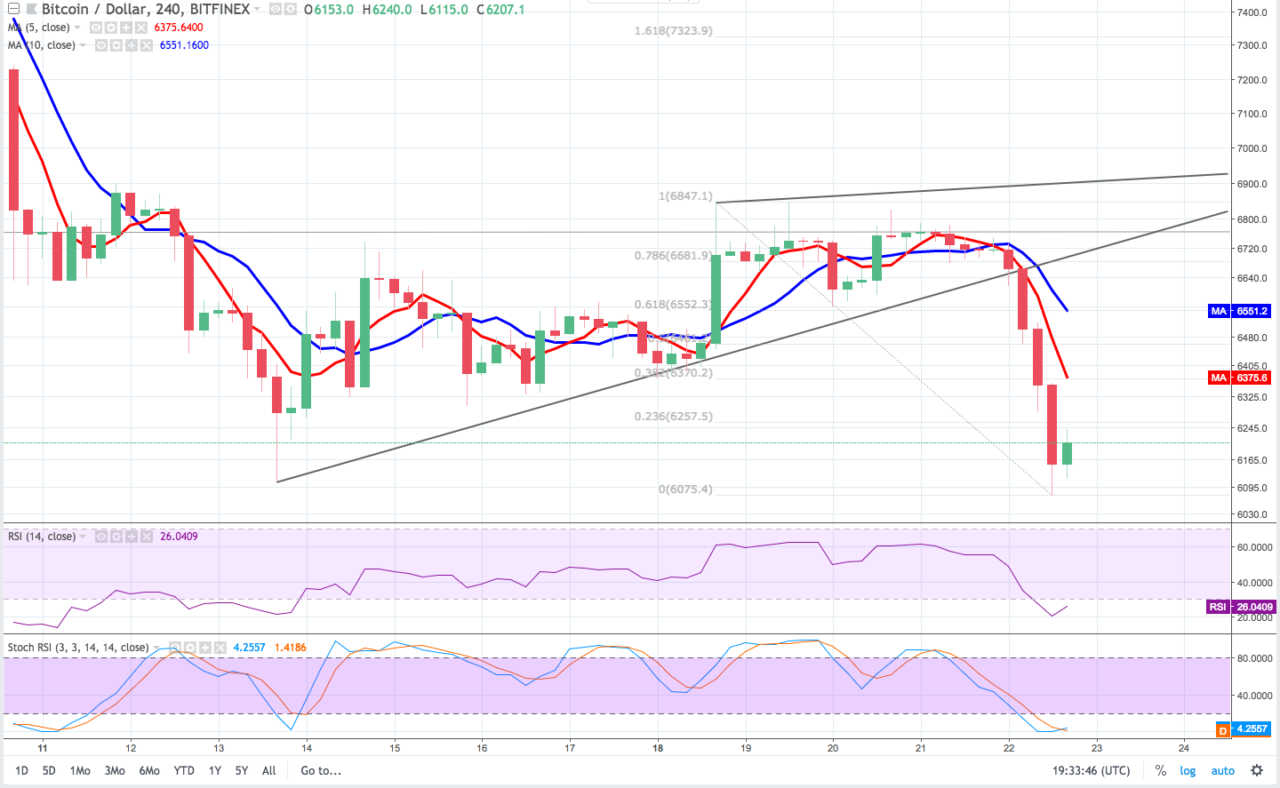 The 4-hour chart shows a rising wedge break down and the indecisiveness that we observed through this weeks sideways trading at the $6,800 support has evaporated and it’s clear that bears are firmly back in the driver’s seat.

Literally all iterations of the moving averages (MA) show bias towards bears, indicating further decline in the short and long term. The Fib retracement shows that with the recent pullback below $6,000, BTC has surrendered all gains plus some since the March to April rally and full retrace has occurred.

Buying and selling volume has dried up and bitcoin will continue to wither until buyers show some interest.

Seems every week we say the next drop or pop to the nearest thousand will make or break some psychological support or resistance, so, here we go again. BTC will remain in troubled waters if it stays under $6,000 but there is support at $5,450.