Bitcoin entrepreneur and investor Trace Mayer believes Bitcoin will hit $27,395 by next February according to his own analysis using a 200 Day Moving Average.

Let’s be clear – there is absolutely no shortage of Bitcoin price predictions floating around the internet. A quick Google search these days yields no shortage of financial experts utilizing fundamental analysis, technical analysis, and Bayesian regression techniques to produce forecasts as far-ranging as the methods they employ. And let’s not forget the daily parade of mainstream articles proclaiming Bitcoin to be worth precisely nothing.

Bitcoin entrepreneur and investor Trace Mayer recently threw out his own predictions on Twitter, and he’s placing his bet on a $27,395 price by next February. His personal technique? The 200 Day Moving Average (DMA), a metric which has been steadily rising for Bitcoin since its inception. According to his calculations, we’ll see Bitcoin hit that price in another four months if it can maintain a $5,767 22 DMA by February of next year.

Like many others who have tried to dissect Bitcoin’s price movements, Mayer has a lot of skin in the game when it comes to cryptocurrencies. Mayer originally provided seed money for the now widely-used Kraken exchange, the Bitcoin payment service provider BitPay, and the Armory Bitcoin wallet. A self-described “entrepreneur, investor, journalist, monetary scientist and ardent defender of the freedom of speech”, Mayer holds two degrees in accounting and law and is a student of Austrian economic theory.

The Method Behind the Madness

Mayer’s preferred technique is the 200 Day Moving Average, a simple technical analysis tool which compares an asset’s price point to its average price over the prior 200 days in order to gauge market direction. If the asset’s current price surpasses it’s 200 DMA, it means that the asset has made significant gains in the past 200 days and indicates a bullish trend. However, if the asset’s current price sits below its 200 DMA, it means the asset has dipped in performance and indicates a bearish trend.

Alongside this data, Mayer provides the relative price difference between the DMA and price point at each interval. Ludicrous price differences (which Mayer pins somewhere above 700%) appear to indicate overvaluation and are followed by steep price drops before an eventual recovery. Mayer seems to place a “fair price difference” somewhere between 150% and 700%, though he does not indicate where he sets his limits.

Interestingly, Mayer’s chart shows an obvious absence of data between November 2013 and May 2016, during Bitcoin’s infamous bull years. One wonders if the data from these years throws a wrench into Mayer’s calculations, or whether he merely considers the data irrelevant to the overall trend. 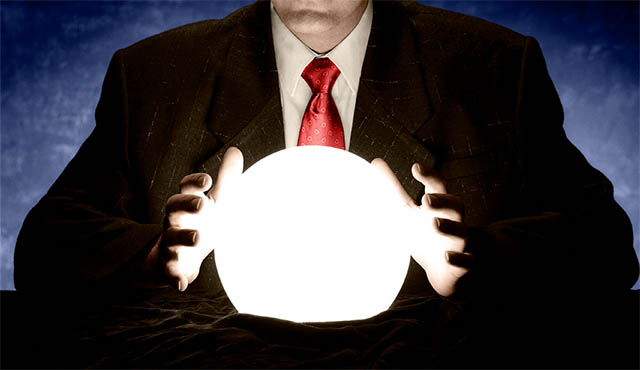 Who Is Closest Without Going Over?

So where does Mayer’s prediction rank on the internet’s crystal ball of Bitcoin prices? Most conservative estimates, which place the $10,000 mark anywhere between the end of this year and the middle of into 2018, would call Mayer’s forecast optimistic at best (and delusional at worst).

Others like John McAfee, who placed what some would call a “very personal bet” on Bitcoin hitting a half a million dollars in the next three years, might call that prediction highly short-sighted. At this rate, it’s probably safer to employ a random number generator to come up with an accurate price prediction.

Whose analysis do you side with? What’s your own prediction for Bitcoin’s price by the end of the year? Let us know in the comments below.