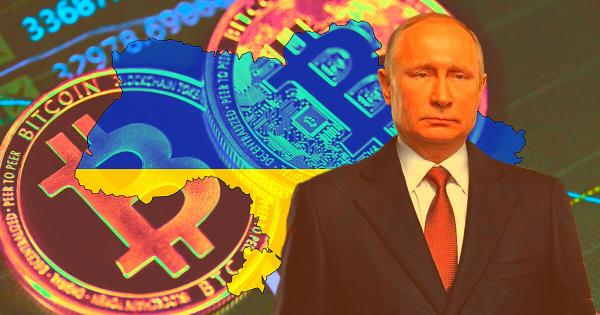 Bitcoin price nosedived to $35,100 on Thursday, down from $43,110 a week earlier, while other major cryptocurrencies plunged as a series of explosions were heard in the distance before sunrise in Ukraine’s capital city of Kyiv and Kharkiv, multiple news outlets reported Thursday.

The cities of Kyiv and Kharkiv are home to millions of Ukrainians.

According to a Reuters report, in the early hours of Thursday morning, Russian President Vladimir Putin authorized a special military operation in Ukraine’s Donbass area, ordering the Ukrainian military to lay down its arms and return home.

“I implore you to put down your weapons now and return home. All Ukrainian army servicemen who meet this requirement will be entitled to leave the battle zone and return to their families,” Putin said.

After Putin finished speaking, a Reuters correspondent in Kyiv, Ukraine’s capital, heard what sounded like artillery shelling in the distance.

According to a report by The Guardian, Russian missiles struck Kyiv and Kharkiv. Other news outlets said around two dozen cruise missiles stuck the two cities.

This is a developing story.

Meanwhile, computer networks in Ukraine have been infected by new malicious malware capable of erasing data from hacked devices, according to two cybersecurity firms with a strong presence in the region.

Symantec BV and ESET LLC both reported detecting so-called wiper malware in assaults against Ukrainian networks, with ESET claiming the hacking tool was installed on “hundreds of computers” in the nation.

Vikram Thakur, technical director of Symantec’s threat intelligence team in the United States, said the company has identified many groups targeted by the new wiper strain.

The wiper has also been found in Latvia and Lithuania, Symantec said. It targets financial institutions and government contractors.

Cryptocurrencies across the market have also felt the pinch of the feared invasion: Ether was down 1.5%, Cardano’s ADA dropped 4.5%, and XRP retreated 7%.

On Wall Street, stocks plunged Wednesday as investors sought safety from the turmoil produced by the Ukraine crisis.

Investors are currently pouring money into US government bonds, boosting their prices and lowering their yields, which move in opposite ways.

Bitcoin proponents frequently pitch it as a safe haven asset comparable to gold, implying that it should serve as a store of value during times of uncertainty.

However, the case for bitcoin as a form of “digital gold” has weakened as more institutional investors begin to trade it, and the cryptocurrency’s price is becoming more closely tied to traditional asset classes such as stocks.

According to John Kicklighter, chief strategist at DailyFX, $39,500 is first-level support for Bitcoin moving into this week, “but $32,000 appears to be the threshold of no return.”