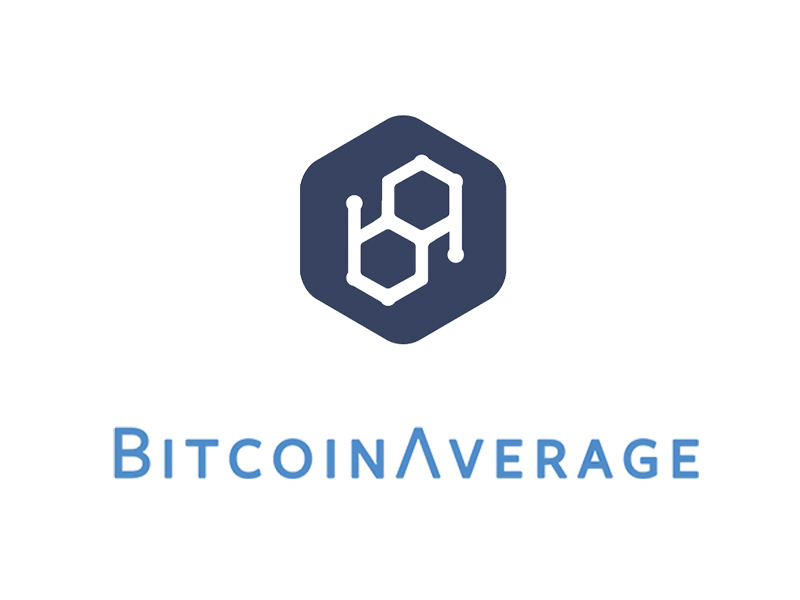 Bitcoin (BTC) markets rumbled with bullish intent this week, as the bitcoin price advanced 9.3% to $470, the highest level reached 2016.

Despite visibly low volumes, a continued uptrend lasted through the week, breaking resistance levels with little to no retracement.

Charts show an uncanny resemblance to a pattern that began on Sept. 20 and lasted through October, right before an exponential burst in price to a 15-month high at $504.

Price action appears to be gearing up for what might turn out to be a BTC reward-halving bubble! 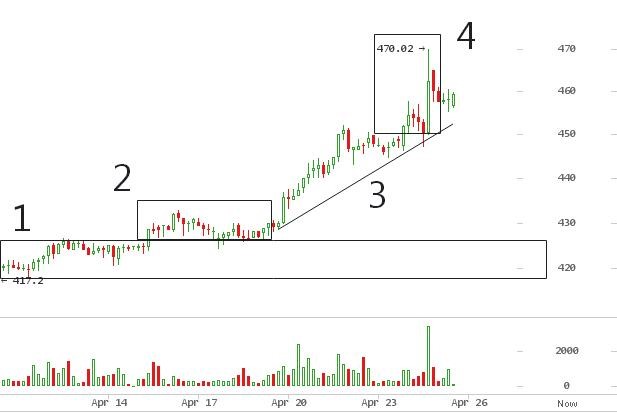 The second test of upper resistance broke out “2” to a new month high at $432, before retracing to $423. This resistance, now support, formed a firm base for a price run up, marked “3”.

Over the week, the impulsive move hardly retraced its way up, only stopping to consolidate within a 23% price range, at significant resistance and support levels.

As of writing this, the price sits at $459 as per Bitcoinaverage.com, a retracement level forced by $470 resistance. 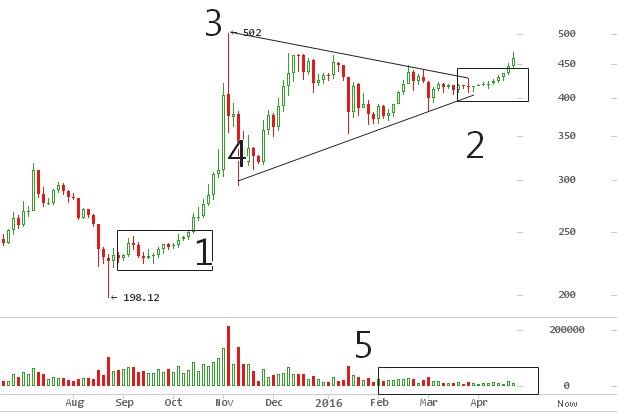 In the above three-day chart, a pattern last September through October, marked at “1”, curves up similar to a breakout from the pennant, seen at “2”.

It has fueled speculation of a similar magnitude break despite vastly different volumes, which is highlighted at “5”. While the volume thins out, the price continues to eke upwards, leading some traders to the following opinion:

“This is a very bullish sign. It tells that the supply is exhausted and buyers are  trying to not fall upon each other. It can turn explosive literally any day from now with all the symptoms of [fear of missing out] FOMO appearing in a few weeks, the ones that have been absent for so long.”

The six-month symmetrical pattern that has unfolded since the peak at $504 on Nov. 4 is breaking upwards. The upper and lower sloping trend lines of this pennant, marked at “3” and “4”, is an expected bullish continuation. A solid confirmation however will trigger when $470 breaks with brute buy pressure. 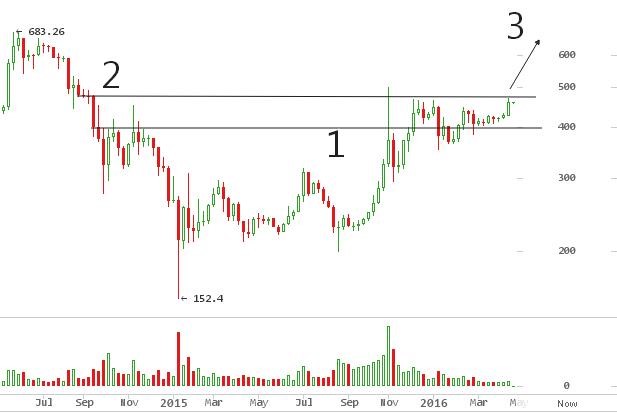 It is clear from the above weekly chart that continued upward momentum at current levels will push the price up to $650. A key level at $400, highlighted at “1”, dates back to September 2014’s bearish breakdown.

The next one is $470 that also stretches back to August 2014. The significance of these levels sheds light on the kind of strength to expect on any upper breakout here. 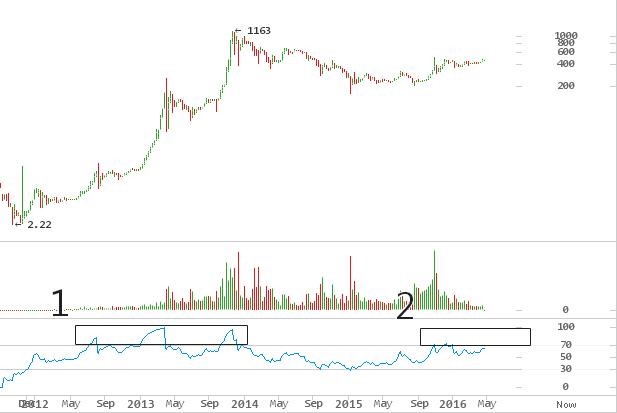 This weekly chart shows there is plenty room for upside as the Relative Strength Indicator (RSI), marked at “2”, is still below oversold levels.

Oversold levels shown at “1” paints a picture of what to expect. Even $800 is a reasonable target at this point.

In anticipation of the bitcoin reward-halving in July, speculation suggests miners have stopped dumping fresh coins into the market, and are instead holding them for a price increase. Thin volumes could therefore be due to miners hoarding coins.

This week, the price appears neutral to bullish and should continue to trade well above $440, the new support level.

Breaking $470 is now a matter of when and not if. Trading below this level might drag out for a while, but just as a consolidation for a second go at breaching $470.

A neutral forecast is due to the significance of resistance levels $470 and $490, so it might take longer to gather enough pressure to pop. The emergence of a trading range between $445 and $470 should not come as a surprise. It may take the form of a bullish continuation pattern, perhaps a flag or a triangle or even sideways.

Regardless of price action this coming week, the trend for the next 2 months is bullish. The medium term is bullish while any downside in the short term is corrective in nature.

Japan made notable advances on regulating virtual currencies within mainstream finance this week. Over the past few months, the country has discussed regulatory frameworks for digital currencies.

Cabinet approved a set of bills recognizing Bitcoin as similar to real money, calling it digital assets that can be used for payments and transfer.

The law also allows banks to partner with IT ventures and virtual currency businesses. Previously, Japanese banks were disallowed from investing outside the banking sector, effectively severing them from FinTech investments.

Unlike most Western governments, which treat bitcoin as an asset, Japan is bucking the trend and setting a regulatory precedence. Interestingly, the island hosts the G7 meeting in June and virtual currencies are a part of the agenda.

The company will move operations to a new headquarters in Luxembourg.

While simultaneously launching its EUR/BTC pair trading, the digital currency exchange can leverage its license across all 28 E.U. member states.

As the first publicly traded securities solely deriving value from the price of 110,000 bitcoins held in trust, the 66% premium (symbol: GBTC) was significant.

This arbitrage opportunity was a coincidence, occurring at a time the price is on the brink of breaking upward, exponentially.

During last October’s run-up to an exponential rise, BIT’s shares traded at a premium. It is now speculated as a leading indicator of sorts.