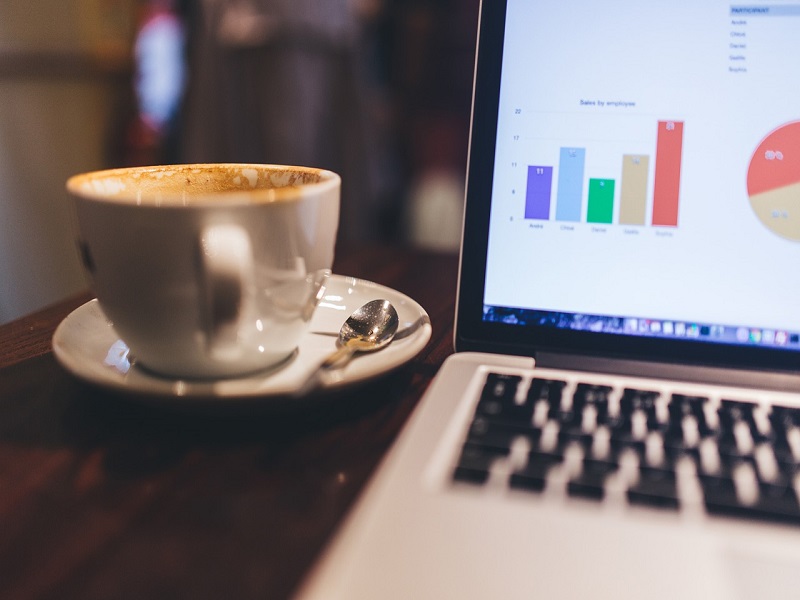 The bitcoin price should make a sharp jump above $420 resistance level this week, and looks bullish at least for the near short term. The target for a continued upward trend is $440, a level dating back to February 14 2016. A declining sloping trend line cuts right around $440, and some more resistance should kick in. This resistance will likely push back on price and force it to retrace to $420. Beyond the short term, price looks bullish having maintained 2015’s trading range.

This article was written by Michael Kimani and provided by the Vanbex Group on behalf of Bitcoin Average. 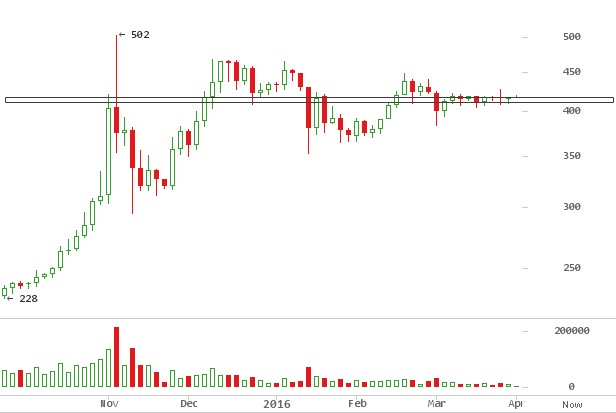 The above 6 hour chart from Bitstamp illustrates this week that the price of bitcoin retraced sharply from its short term high at $428, selling off to a low $408 over 3 days, March 27 to March 30. As is typical of rebounds from support, a double bottom was in order. Right after the $407 low, buyers pushed up the price back to $415, before a final sell off to confirm a bottom base for a launch at $408.

What followed was a gradual retracement to $420, where the price met resistance. $420 is a significant level as both a support and resistance since November 2015. Both charts above shows the price attempting to break the upper ceiling, but forced to trade in a sideways range to gather steam for a break upwards. 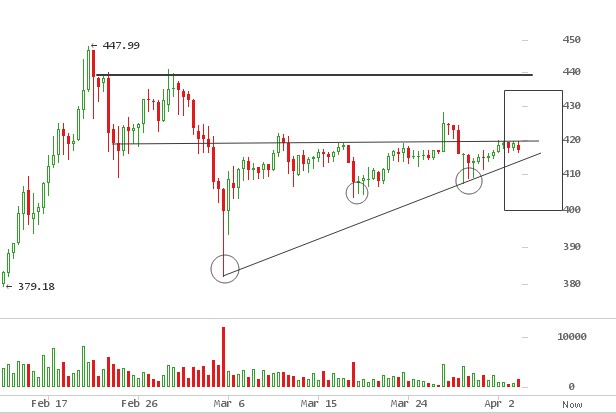 This 12 hour chart from Bitstamp shows a series of encircled higher highs and higher lows that have formed since March 6; $382, $402 and most recently, $407. The trend is approaching $420 yet again, a level that has proven stubborn in the past.

This week, the market should make a decisive directional break above this line.

Failure will result in a break out from the triangle wedge that could trigger a massive sell off. Ideally several attempts pecking at this level usually confirms whether there is enough market strength. Testing of $420 has been going on for 4 weeks, and it is about time for a push higher.

Bitlitguy on reddit frames this in a trading strategy

“A close above in term resistance signals a long entry towards an immediate upside target of $425 flat, with a stop loss somewhere in the region of $418.5 defining the risk on the trade. Conversely, a close below support will put us short towards $411, and a stop at $419 protects our downside on the position.” 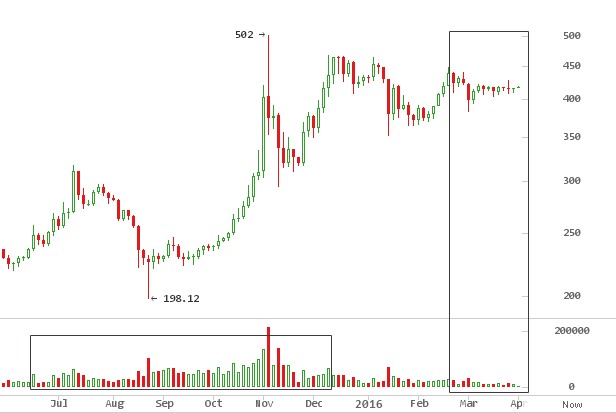 There is an impending break out that will be accompanied by huge volumes. So far, volumes have been thinning out and is an indicator of an expected voluminous price swing. Current price range is squeezing, and it will have to pop out soon. In Bitcoin markets, stability is often followed by volatility.

The possible impact of the upcoming halving, now 100 days away, is not lost on speculators, given bitcoin’s price bubble around the last halving event.

“So I’m thinking we will see another major pump here before the halving in anticipation just like with litecoin. I however see this as mostly a ‘hype bubble.'”

This week, Needham and Co., a Wall Street investment and research firm, released a report valuing bitcoin at $650, well above the current market price of $420. As part of an on-going coverage of the publicly traded Bitcoin Investment Trust, an ETF style vehicle, its shares were valued at $62.

Spenser Bogart, a research associate focused on bitcoin and blockchain, said, “We believe bitcoin has value as both a digital gold and as a payments channel.”

Speaking for the firm, he commented on development of current blockchain industry, “We think there’s a strong possibility that bitcoin will be the nucleus of security for all these blockchains”

Divergence between Eastern and Western exchanges have led to analysis like Fractal Forecast: Bitcoin Markets in East & West Diverge, that attempt to decipher which direction this pattern will break. This one was bullish, and makes a good case for a break upwards. The report states:

“Bitcoin has shown its strength to me by overcoming the range we were stuck in for most of 2015. Many are worried that the upcoming halving of the Bitcoin mining reward is already priced into the market. Maybe it is, maybe it isn’t. Either way, supply is going down this summer, and no one wants to be watching from the sidelines. I’d like to see us break upwards this month, paint some volume in the $450-$500 range, and continue to show steady progress toward taking back $600.”

As the emergence of the popularity of altcoins such as Ether and Factoids have taken trading volume away from bitcoin we will start to see a slow rise of bitcoin as this altcoin volume comes back to the more stable bitcoin. As the halving day is coming up soon, most investors will want to keep their bitcoin waiting for the predicted rise in value at that time.

Do you think the predictions made by BitcoinAverage will be correct? Let us know in the comments below!