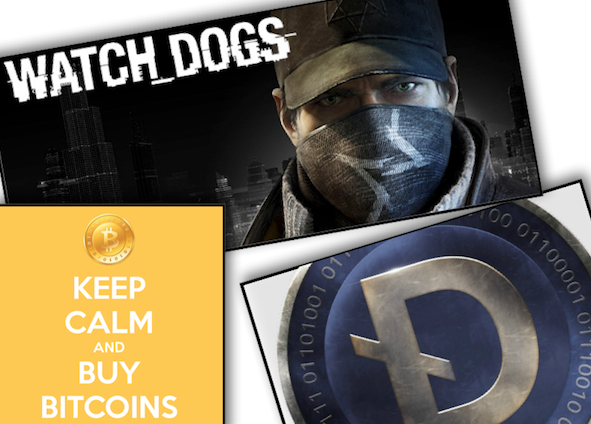 Bitcoinist News Round Up

If you have been following Bitcoins price, you have noticed that it’s risen from its price of around $450 to as of now, around $580. This is a 33% increase in price and the sudden explosion of growth as many people scratching their heads. One of the most prominent news that first got things in the motion was the buying of a 700 bitcoin sell wall. In layman terms, this means someone had a order of 700 Bitcoins for sale at a certain price. This means that the price cannot increase, effectively a ceiling. Now that that’s out of the way, the prices been steadily increasing and briefly touched $590.

Watch out for watch dogs

Recent news has popped up stating that  some of the Watch Dogs torrents that have been circulating the Internet, may be siphoning 25% of your GPU cycles in order to mine Bitcoins. What’s causing this is a rogue application named “Winlogin.exe” which is same name of the legitimate process. It doesn’t take up anywhere near as much resources, so if it is, you know you have the rogue application. If it were me, I’d rather fork up the $60 now or wait for prices drop and buy it; not worth the headache.

It’s been a busy week for Darkcoin. Marketcaps wise, Darkcoin has solidified its position as number 3 with only a little over 4 million Darkcoin. Also this week, Darkcoin has hard forked, bringing online Masternodes, as well as the first successful payment to the aforementioned Masternodes. Despite the massive dumps going on, the prices have been relatively stable sitting around $12 right now. With darksend RC2 finalized (with the hard fork). Darkcoin is not done yet. With RC3 of darksend set to release June 14, the developers are keeping busy with constant fixes. Things are looking bright for this dark coin.