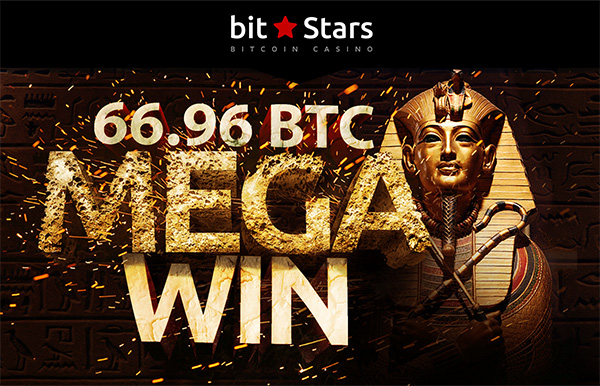 A Bitstar has been born as a lucky bitstars.net player sets a new record for the bitcoin casino, walking away with a mega win of 66.96 BTC on Sunday the 3rd

has been officially recognized as the largest payout to date in this ever-growing bitcoin casino. The casino’s record prize of 66.96 BTC – equivalent to $40,000 – was won by a lucky player who was
trying his luck on some of the new games released just a few days earlier. In what would probably prove to be the spin of his life, he managed to turn a 0.03 BTC stake into a 66.96 BTC win on the slot Eye of Ra.
Eye of Ra is a new 5 reel multi game with a new exciting reel layout (3-4-5-4-3) that increases your chances to win while making it easy to follow all 720 ways to win. With a bit of luck the game brings
about lots of bonus spins and it also pays out on any position from left to right. The Head of Bitstars, Nikolica Vadaski commented, “It’s great for Bitstars.net to bring forward
such happy moments but even better to be acknowledged for such a juicy payout. We work extremely hard to deliver online entertainment with big payouts and the fastest withdrawals.
It’s a tremendous accolade for the site and we’re proud to be part of this ever growing bitcoin casino”. We caught up with the winner Jon about this fantastic win and asked him a few questions.
Here is what he thought.

He said “I could not believe what was happening, as soon as it happened I got extremely excited and realized I would have a problem sleeping that night. All I could think about was what I was going to do with the

How did you come about this win, what exactly happened?

How did you feel as soon as you realized how much you had won?

I felt great, especially with the fact that although bitstars are relatively new, they were very quick and professional in the way they effected my pay-out. They really made me feel like a VIP player.

How did you get to know about bitstars?

Bitstars came across my radar in trying to find the best Slots, which in fact I have done successfully! This casino is a sure winner.

What is your favourite game?

Have you decided what are you going to do with the money now?

Yes, I am going to hold onto the BTC for future appreciation. I am pretty sure that the value of the BTC is going to go up just like its popularity has recorded very rapid growth.
Bitstars.net is one of the leading bitcoin casinos in the market, always on the forefront of releasing new and exciting games, added entertainment, new product lines and secure play for all its players.