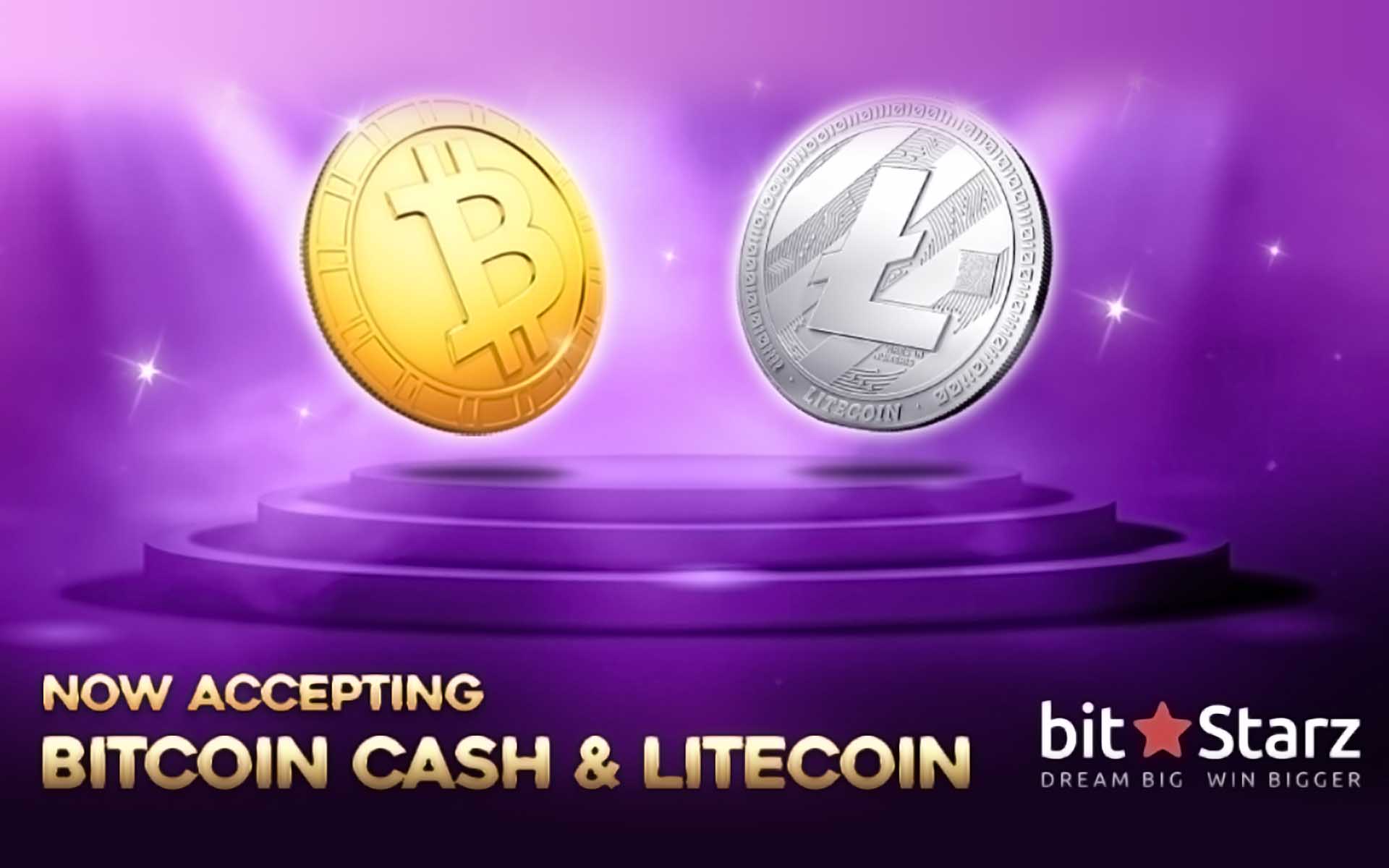 Monday, Jan 29, 2018 – In an announcement that is sure to have gamblers everywhere smiling from ear to ear, BitStarz Casino is now accepting Litecoin (LTC) and Bitcoin Cash (BCH) deposits and wagers. Becoming one of the very first online casinos in the world to accept both of these leading altcoins  – with BCH recently becoming a fixture at Coinbase – BitStarz is looking to open the door to altcoins by offering LTC and BCH support.

LTC – one of the world’s foremost altcoins – launched back in 2011. Evolving from Bitcoin, it has grown to become not just a tremendous option for those looking to diversify, but also a viable currency for anyone that has intentions of taking the world of online casino play by storm. Fast payment confirmations, adaptive technical upscaling, and in many ways presenting the perfect compliment to Bitcoin, it was no surprise to see LTC’s value skyrocket during 2017.

BCH launched just a few months’ back, coming about through the Bitcoin Classic fork that caused a trading frenzy. What helped to generate interest in BCH was the increased size of its blocks, allowing for more transactions, lower transaction fees, and quicker transaction speeds. The whole purpose behind BCH was to craft a cryptocurrency that could compete with PayPal and Visa when it comes to transaction levels, which is probably why the demand for it amongst gambling circles has grown.

The altcoin market has been bubbling over lately, with this certainly not escaping the attention of the BitStarz team. Listening to players, it has covered every base to ensure that LTC and BCH are made available for use. Allowing members to deposit and wager in LTC and BCH at will, Softswiss games specifically will initially allow players to bet through BCH, with more providers waiting in the wings to add BCH betting support. Taking its cost-effective fees and speed on board, it’s easy to see why the demand for both LTC and BCH functionality has grown, with BitStarz answering the call.

Topping the tree when it comes to hybrid-currency online casinos, Bitstarz.io has forged ahead, embracing Bitcoin as a payment option unlike anyone else. It isn’t just Bitcoin that features on the BitStarz cashier page either, with LTC and BCH now joining the ranks. Players will be able to play the hottest online casino games around through LTC and BCH deposits, so you won’t be left waiting should you want to put your Litecoin or Bitcoin Cash to work. Known for Bitcoin support, but now giving LTC and BCH its share of the spotlight, there is a reason as to why AskGamblers has labeled BitStarz as one of the most reputable online casinos around.

Srdjan Kapor (BitStarz Marketing Manager) was quick to comment on the arrival of LTC and BCH:

As the uptake of Litecoin and Bitcoin Cash continues, the timing is perfect for us to announce that we will now be accepting both as deposit methods. Proving that we are one of the most flexible and accommodating online casinos around, BitStarz is happy to add LTC and BCH to our wealth of available cashier options moving forward.

BitStarz has blazed a trail for Bitcoin-based gambling around the globe, combining it with major international currencies to create a seamless online casino platform. That’s not all, as, alongside Bitcoin, LTC, and BCH support, it loads up on games unlike any other casino around. Retro slots, video slots, 3D slots, progressive jackpot slots, and an array of table-focused favorite, you’ll never be left wanting for games at BitStarz that’s for sure. Powered by an Antillephone N.V, Curacao gaming license, outstanding personal service, souped-up withdrawal speeds, and a game selection that just keeps growing, BitStarz has become the leading name in Bitcoin – and now altcoin – casino play!

For more information on BitStarz and what this universally respected casino has to offer, please contact Srdjan Kapor at [email protected].