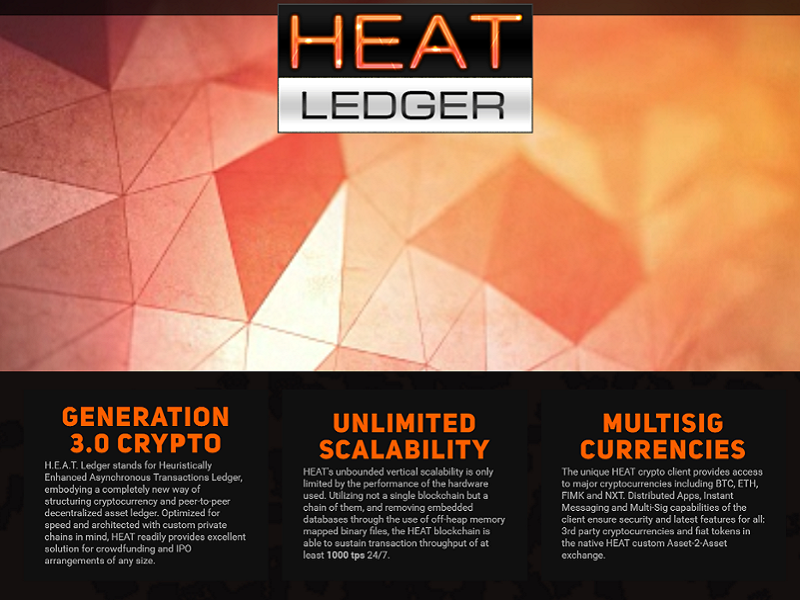 Svante Lehtinen sat down with Bitcoinist to talk about the proposed HEAT ledger. Billed as a ‘blockchain 3.0 technology,’ The project claims to improve upon current blockchain technologies by dramatically improving transaction speeds through a synthesis of proof-of-stake and proof-of-work. Lehtinen is the project leader of HEAT and an experienced entrepreneur of 20 years. He is also the founder of the 2.0 cryptocurrency, FIMK, and the COB of the nonprofit Krypto Fin ry association.

Also read: The Future of IoT: Blockchain Biometrics with HYPR

Could you give us an overview of what HEAT is?

HEAT is a cryptocurrency platform resolving the two most pressing problems of the existing 1st and 2nd generation public decentralized ledgers: Low transaction throughput rate and lack of blockchain scalability. The function of the public HEAT token is to not only enable impressive selection of the latest blockchain tech for the public, but also to act as a live showcase for the blockchain products and features of Heat Ledger Ltd – a company whose business is to produce cutting edge blockchain corporate Fintech solutions for client companies and joint venture partners of any size.

HEAT is billed as a blockchain 3.0 technology, could you elaborate further on what you mean by that?

HEAT’s self-appointed Gen 3.0 tag comes from the radical changes made to the cryptocurrency core structure compared to earlier generations, effectually making HEAT a “decentralized ledger of centralized ledgers” that performs at a speed thousands of times the currently available crypto tech such as Bitcoin or Ethereum. The means to achieve such tps figures securely and in a sufficiently decentralized manner include removal of embedded database by utilizing direct binary writes, using off-heap memory, and deploying real-time database replication layer through internal configurable event sink mechanism. This means

operators are able to plug in any brand of database server to their HEAT node. This binary blockchain messaging based plugin mechanism enables users running replication to store all their private data encrypted on the blockchain – yet have it replicated and unencrypted in real-time to their inhouse MySQL server for fast indexing, custom queries etc.

To complement the Gen 3.0 status, on the application layer HEAT includes and enhances all the latest 2.0 crypto features such as distributed apps (Java and Javascript), instant off-chain p2p messaging, and multi-sig custom colored tokens with Asset-to-Asset trading.

This platform utilizes a synthesis of the proof-of-stake and proof-of-work. How does it exactly do this?

HEAT uses proof-of-stake consensus algorithms inherited from the NXT open source. The proof-of-stake model, which is quite well known by now, grants incentive for p2p nodes to be kept online just like proof-of-work. The chances for receiving a block reward, however, are not based on processing power of a node, but on the amount of blockchain tokens the node’s authorized accounts hold (either own, or have leased).

So that’s the mathematical consensus model used to form new blocks. Proof-of-work as such isn’t used for HEAT, as among other motives we aim for an ecological incentive system that isn’t based on hogging physical resources. For block rewards HEAT employs a unique second layer, equal in reward size, named proof-of-presence. In PoP nodes are rewarded for maintaining online the sliced block files that form the complete HEAT blockchain. In HEAT there’s not a single blockchain but a chain of blockchains, each manageably small in size and cryptographically assembled to form the full blockchain by the consensus governing core software.

Individual nodes can host any number or just one of these chain files, a bit like torrent files. HEAT’s block algorithm grants the highest chances of reward for files whose presence in the peer network is low. But this hybrid block reward is just a glue-on to the core PoS to incentivize storage of transaction archival. It doesn’t affect the consensus model, which lays on the trusted and tested – and very attack resilient proof-of-stake. More details can be found from the recently released HEAT White Paper at http://heatledger.com/HEATWhitepaper.pdf

An ICO was launched for the platform on July 11th, how successful has that been so far?

The ICO has been fairly successful already. About 1200 BTC worth of cryptocurrencies (BTC, ETH, NXT, FIMK) have been invested so far, although we left out the HEAT alpha ICOchain platform that would have made the ICO process truly unique. It seems the technology presented has gathered mainly the interest of those people following the leading edge of crypto development. The marketing exposure has still room to improve. So we’re looking forward for more people to hear about the opportunity during the last week of the ICO that ends on August 8th midnight. The business setup of HEAT is particularly interesting as the HEAT tokens received by investors from the first round crypto capital funding (the ICO) are entitled to stock options for Heat Ledger Ltd EUR based stock IPO, arranged in late 2016.

How can people participate in this ICO?

The old school way of transferring cryptocurrency to Heat Ledger Ltd’s BTC, ETH, NXT or FIMK accounts is in use. Additionally we employ four escrow exchanges that people can also use if they feel more comfortable to let a 3rd party go through the process of arranging the HEAT tokens for them. The ICO page at http://heatledger.com/ico lists the details of the ICO price levels, destination accounts and escrow agents. A total of 25 million HEAT tokens are distributed by September 5th to the investors in pro rata basis.

Could you briefly summarize what you think the most significant impact this project could have on the future of blockchain applications?

We hope HEAT will open the eyes of the most dedicated decentralization enthusiasts so that they see how it’s possible to pave the way for robust integration of inhouse data systems with distributed ledgers, still maintaining operator independent data integrity through decentralization. Scaling to VISAnet levels of 50k tps boost rates and beyond is required for crypto ledgers to become mainstream for money transfer and trading usage. HEAT does that already. Our JV arrangements with licensed money transmitter and crowdfunding companies bring this tech down to earth, so users will be eventually able to move and high-frequency trade their assets priced in fiat currencies. On blockchain.

Thank you, Svante, for speaking with us and giving us more information on the new HEAT blockchain ledger.

What do you think of HEAT? Do you think it will become the future of blockchains? Let us know in the comments below!