Blockchain Technology is Gaining Ground – But Not Where You’d Expect

When blockchain first started to capture global attention, everyone predicted it would take the world by storm, disrupting major industries starting with finance. Since then, we’ve come to realize that progress has been slower than we initially anticipated, not to say there hasn’t been any.

A lot of people have been wondering if there are any fully realized blockchain projects actively in use. There are, in fact, many, and the patterns both agree with and go against the early predictions. Keep in mind, these projects are active, and in use, but they are still being added to and improved upon.

Here is the current height of blockchain progress:

Retail/Food Supply: Everyone talks about Walmart and Maersk for good reason. Walmart is using blockchain to track products back to their roots. Ultimately they’d like to “IOTize” every part of the process for greater, detailed control, but this is a high-cost task. For now, they are using blockchain to track poultry, tracking transactions from farm to table reducing loss, food spoilage, and disease outbreaks.

Dole, Nestlé, Unilever, and Tyson Foods are regulating (separately) food safety with Walmart, Kroger, and JD.com using blockchain. Thanks to this effort they’re offering all growers, suppliers, processors, distributors, retailers, regulators, and consumers permissioned access to information about the origin and state of food in their transactions. All members of the ecosystem can use their blockchain network to trace contaminated foods to their source in a short amount of time to ensure they are quickly removed from store shelves.

Carrefour is using blockchain in order to track where products come from, as consumers increasingly look to ensure that products meet standards regarding ethics and general safety and would enable shoppers in France to trace where certain food products are sourced. They will extend the use of blockchain to honey, eggs, cheese, milk, oranges, tomatoes, salmon and hamburgers by the end of the year. It currently uses the blockchain to trace the production of free-range chickens in the Auvergne region in central France.

Consumers can use a smartphone to scan a code on the package to obtain information at each stage of production, including where and how the chickens were raised and what they were fed as well as where the meat was processed.

In another example, Provenance uses blockchain technology to create transparency for consumers in Europe in much the same way. So far they’ve proven tuna fishing sources and sustainability claims, in addition to proving fair wages for coconut farmers.

Shipping: IBM and Maersk are actively field-testing their technology, in conjunction with Dutch customs and the US Department of Homeland Security, all of whom are tracking containers remotely. The tech’s reliance on cryptographic signatures makes it harder for anyone to mislay goods or tamper with labels while cargo is on the move, and can reduce the time goods spend in transit.

UPS joined the Blockchain in Trucking Alliance (BiTA) in November 2017 to push for increased transparency among all groups involved in the supply chain. Currently, UPS is working with blockchain to better its customs brokerage business. FedEx also joined BiTA in February 2018, and they have already launched a blockchain-powered program to help solve customer disputes. The company designed the program to clarify what data should be stored on blockchain to best remedy customer issues and to store records and strategic planning and analysis data.

Pharmaceuticals: DHL is already working with Accenture to establish a blockchain-based track-and-trace serialization system for pharmaceuticals in six areas worldwide. They have a working system populated by more than 7 billion unique pharmaceutical serial numbers, and handling more than 1,500 transactions per second. As soon more governments, institutions and pharmaceutical companies join in, the system will offer a better way of cutting costs, elevating security and trust, eliminating error-prone data movements and enabling real-time supply chain transparency.

Jewelry: In January 2018, Brilliant Earth partnered with Everledger to use blockchain to track and trace the provenance of diamonds and other gemstones, ensuring they are conflict-free. This is another use case for tracking the supply chain, in this case, diamonds instead of food.

The diamond business is a tight-knit industry whose members and customers share common concerns over gems’ origins and authenticity. This helps explain the success of Everledger, a company that can record over 40 identifying features of a diamond, including color and clarity, and register them to a blockchain. Everledger has digitized more than a million diamonds and has plans to branch out to other markets, including fine wine and other exclusive products in need of better anti-counterfeiting records.

Transportation: British Airways started using blockchain last year to manage data about flights between London, Geneva, and Miami. Using one unchangeable history source, the airline hoped to reduce conflicting flight information coming from gate monitors, flight apps, and the airline’s website. One more time we can see the use of blockchain as the only truth, avoiding redundancy of systems, efforts, and errors.

Humanitarian: The United Nations (UN) is currently using blockchain across 16 agencies. With the World Food Program, they’re helping refugees to purchase food with only an eye scan and coordinating everything through Blockchain. With the Office for the Coordination of Humanitarian Affairs they’re improving donor financing, securing and monitoring supply chains, and data protection, using also Blockchain securing the whole chain of information.

According to Harvard Business Review:

Executives can figure out where to start building their organizational capabilities for blockchain but they need to ensure that their staffs learn about blockchain, to develop company-specific applications across the quadrants we’ve identified, and to invest in blockchain infrastructure. Financial services companies are already well down the road to blockchain adoption. Manufacturing is not.

There is truth in this. Executives in manufacturing, logistics, and supply chain tend not to have as strong a grasp on the definition of and capabilities of blockchain technology, but once they start, they follow through quickly. Finance is slower, and many of the active uses of blockchain by banks are actually for supply chain transactions. 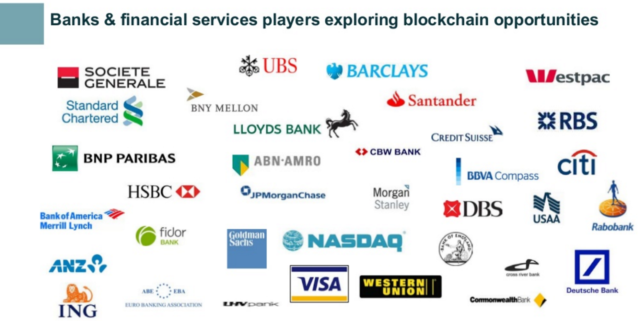 HSBC and ING, for example, announced their first live trade-finance transaction on the blockchain last month – regarding the shipment of soybeans. Barclays’ transaction involved butter exports. Even banks seem to be taking real steps of experimenting with blockchain through the supply chain direction. There are active finance use cases, however, which were detailed in a January 2018 report by The Future Society.

When it comes to traditional finance and blockchain, many banks are making their first forays by joining consortia. Banking-focused R3CEV (R3), Hyperledger, and Enterprise Ethereum Alliance (EEA) are just a few such consortiums attracting the interest of banks and other financial institutions.

Not all banks are quite so trepidatious, however. JPMorgan has its own internal blockchain team along with its own blockchain infrastructure called Quorum. Based on the Ethereum blockchain, Quorum is specifically designed for financial services transactions. In October 2017, the financial giant launched a blockchain-based inter-bank payment platform called the Interbank Information Network.

The Royal Bank of Canada (RBC) has been trialing blockchain in cross-border fund transfers with “Project Jasper,” which includes R3 and Deloitte Canada. They have also conducted trials with prominent blockchain firm Ripple since 2016 or earlier.

Visa unveiled the project of its blockchain-based business-to-business payments service called “B2B Connect.” The platform was first announced in 2016 and is developed in partnership with Chain, an enterprise-focused Blockchain infrastructure platform.

While blockchain has been slower to be adopted than originally anticipated, real progress has been made, focusing on the easiest and most obvious fits first. It will take time before blockchain technology disrupts every industry, but it is inching its way along. The use cases for blockchain technology have, thus far, proven to be promising. Authentication, transparency, inventory tracking, dispute resolution, invoicing and payment solutions – not a bad start for a technology that really only just getting started.

Do you agree or disagree with our findings? Are there other blockchain projects that should be on this list? Let us know in the comments below.