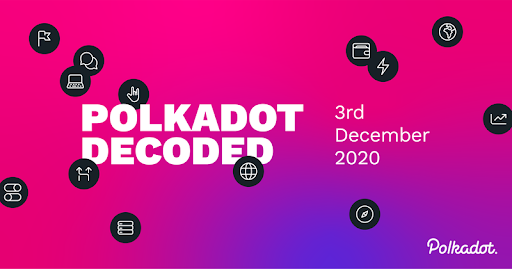 One of the blockchain space’s runaway successes of 2020, Polkadot is about to host its first community gathering since launching in August, when it immediately slotted into the crypto market cap top ten.

Polkadot Decoded is a live event set to go ahead on December 3, where some of the network’s core developers will deliver a program of talks aimed at educating and enlightening viewers on Polkadot’s main functions.

With Polkadot boldly setting itself up as a rival to Ethereum, the free event, which will be closed out by Polkadot founder and former Ethereum CTO and co-founder Dr. Gavin Wood, may reveal how much ground can be made up by the former, while the latter spends the next two years edging laboriously closer to Ethereum 2.0.

On December 3, Polkadot Decoded will give viewers a chance to see the people behind the code, as Polkadot devs are joined by their counterparts from projects hosted on the Polkadot network, as well as blockchain journalists, to discuss some of the ecosystem’s most relevant functions.

Those discussions are expected to touch on the key technologies underpinning Polkadot’s multi-chain architecture, such as parachains and cross-network bridges. Talks are also expected to be delivered by teams currently working on Polkadot applications, such as Moonbeam, an interoperable smart-contract platform, as well as PolkaBTC, a Polkadot-based wrapped version of Bitcoin.

One discussion was just updated to feature Co-founder and CTO of Ampleforth, Brendon Illes, as part of Camilla Russo’s “Polkadot’s DeFi Potential” panel. This might indicate an announcement that could be coming up from Ampleforth’s Co-founder about possibly building on the platform.

The event will be closed out with an interview between Polkadot’s Dr. Gavin Wood and Laura Shin of the Unchained podcast. Wood previously helped launch Ethereum and is credited with helping invent many fundamental components of the blockchain space that we know today, such as the Solidity smart-contract programming language, and Proof-of-Authority (PoA), a modification of the common Proof-of-Stake (PoS) consensus mechanism.

With Ethereum’s next major development milestone – Ethereum 2.0 – still years away from fruition, now would be a good time for any prospective “Ethereum Killers” to make themselves known. Many projects have come bearing this ominous title over the years, yet none have managed to deliver on their promise.

Polkadot’s swift emergence into the market cap top ten shortly after launch (it climbed to the sixth spot in early September), could see it feasibly granted the title of “killer of killers”, as it immediately outpaced all other blockchain platforms in the top ten, including all of Ethereum’s competitors.

Gavin Wood explained the technological leap in transaction speed that his project has made over the current crop of blockchain platforms such as Ethereum, writing:

“Latest benchmarks indicate @polkadotnetwork, even without parachains or multithreading, will still push a sustained rate in excess of 1,000 tx/s. With parachains and multithreading then maybe 1,000,000 tx/s, 100% secure, upgradable and decentralised.” For context, Ethereum currently processes around 15 transactions per second.

Polkadot Decoded is a free online event that’s open to all levels of crypto and blockchain enthusiasts, from newbie to expert. Interested parties can sign up via CrowdCast.