What’s in a Name? Adding ‘Blockchain’ Boosted This Company’s Stock Price by Over 430%

An interesting story came to light over the weekend, concerning a UK company whose share-price literally (i.e. figuratively) jumped out of its skin following a slight name change. That name change? From On-line Plc to On-line Blockchain Plc. Has the world really gone THIS crazy… again?

Out of its Skin?

Okay, I guess I owe you the numbers, but for me, that’s the least interesting aspect of this story. Anyway, the price has been ticking along at about $0.21 USD for the past year or so. News of the name change broke on Friday, and the price surged to a high of $1.12. 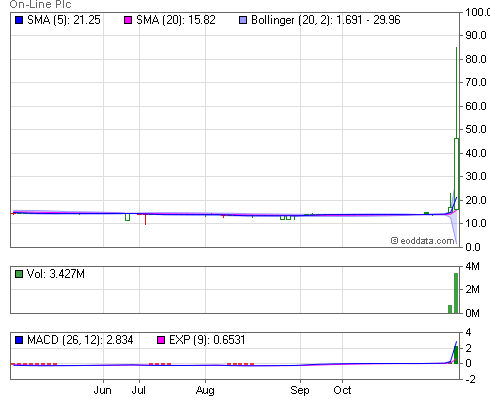 That’s a tidy 433% jump in the course of only a few hours, and just in time for Christmas shopping. If one had managed to dump at that price, of course. The day finished at $0.61, but that’s still over 190% so not to be sniffed at.

So What Do They Do?

Not an awful lot, it seems. The company describes themselves as an ‘incubator and investor in internet and information businesses’, which could mean anything and nothing. This the home page of their website, on-line.co.uk. I kid you not.

The name change and statement that they had been working on cryptocurrency and blockchain technologies “for some time”, had them briefly commanding a market cap of £6.5million. Yet the latest published financial reports show them making a profit of £12,000 on turnover of £85,000.

The last time they had anything like as strong a share price was March 2015, when something kicked the price up to 45 pence, since when it has been steadily dropping.

You Promised us Something Interesting!

You see, this isn’t the first time that On-line Plc has benefitted from a tech boom. After launching on the London Stock Exchange AIM back in 1996, the share price steadily dropped from the initial £1 valuation.

But you remember the DotCom bubble of the early noughties? I was working as a web developer for a big sports portal in London, who investors kept throwing money at until they realized it was all being spent on a free Coke machine for the staff.

We would add DotCom to the end of almost everything, even normal speech:

“You coming down the boozer dot com?”
“Do you really need to ask dot com!”

Well, On-line plc certainly remembers it. According to Morningstar, their erstwhile languishing share price peaked at £1,250! I’d suggest probably almost entirely due to being called On-line plc and that domain name. 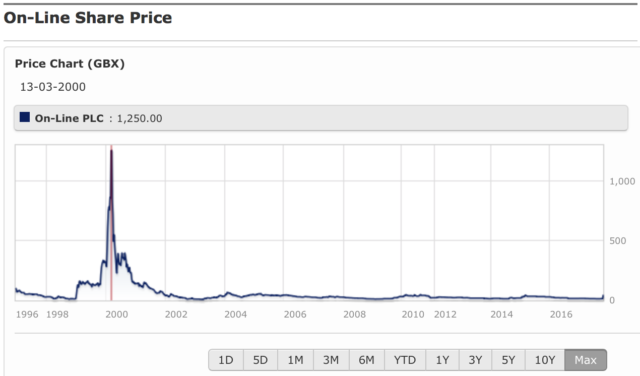 Perhaps they were hoping this name change might emulate that? Not quite, but top-notch bandwagon jumping nevertheless. Anyway, what’s good for the goose… Emilio Blockchain Janus, over and out!

What do you think of ‘blockchainizing’ company names to capitalize on the growing interest in blockchain tech? Let us know in the comments below.