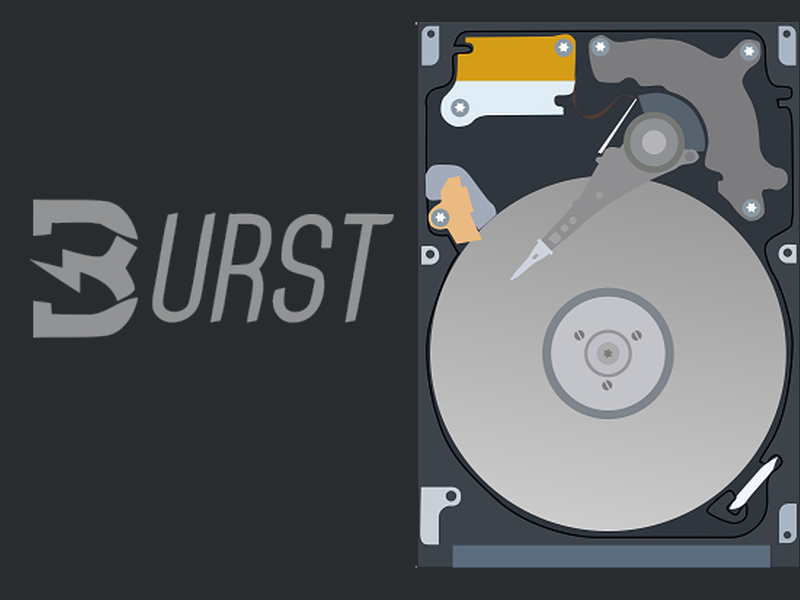 Burst is a emerging cryptocurrency that seeks to solve the problem many consumers have: a way to have cheap, yet secure, cloud file storage. Cryptocurrency and its decentralized nature will allow both users to receive financial incentive for renting out some of their hard drive space, but also benefit from a easily accessible storage system. Bitcoinist talked to the Burst Team regarding Burst and what decentralized file storage really means.

1. What differentiates Burst from other cryptocurencies?

BURST is easily differentiated from myriad other cryptocurrencies. Firstly, it is the world’s first Proof of Capacity Coin, and secondly, it is currently the only coin to have working Turing-complete smart contracts in a live environment. Proof of capacity was fully developed by the original developer, going by the name burstcoin on bitcointalk forums. Smart contracts run on the technology called Automated Transactions which was developed by CIYAM developers, headed by Ian Knowles.

Being an innovative fork of NXT, BURST also brings the entire host of other crypto 2.0 technologies, such as various forms of advanced transactions (Assets, Escrow, Subscription and Messaging, to name a few) all directly from wallet. Unique amalgam of all listed technologies sets BURST far apart from all other cryptocurrencies.

2. Can you explain POC (proof of capacity) to me?

Proof of Capacity is an innovative algorithm using storage space to mine. In a nutshell, miners pre-generate chunks of data known as ‘plots’ which are saved to disk. The size of plots miners store is effectively what is commonly referred to as hashrate, i.e. your mining ‘speed’. Every block the miner will skim through the saved plots, and come up with an amount of time until it is able to mine a block if another block hasn’t yet been found by another miner. After reading through the plots is complete, miners’ hardware can idle until the next block. Plot reading process generally does not take long, varying according to total size of plots a miner owns. 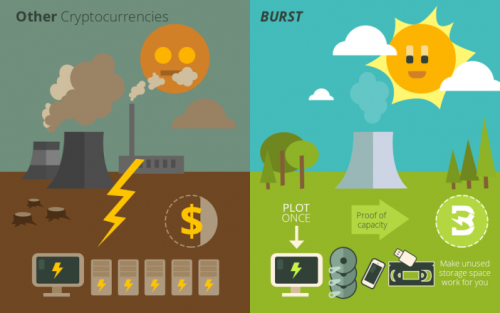 3. Should miners consider POC a possible venture compared to POW?

Definitely, the entire BURST mining process uses nothing but off-the-shelf hardware, and the algorithm itself is ASIC resistant. In addition, the mining process is very energy efficient, as disk drives of today are quiet and pretty low power, normally using not more than 10W while operating. Compare this to the power consumption, heat and noise of advanced graphics cards, or ASICs used in mining other coins and the advantage for BURST is quite clear. Since BURST uses commonplace hardware and is ASIC resistant, it encourages decentralization.

Everybody has some free space on their drive which can be used to mine; therefore mining BURST has virtually no upfront cost for the average miner. With regards to scaling mining operations, BURST’s inherent advantages also make larger mining farms easier to operate, as they do not require heavy duty cooling equipment, for example. Best practices for mining, both ‘at home’ and ‘at scale’ are still being developed, and BURST community welcomes everyone who is willing to improve them. Join us!

4. Can you tell me about the difference between Burst and your most similar competitor for lack of better words, Storj?

Storj and BURST are really not the same at all, at the moment. Right now Storj is focusing on making a decentralized drop box that will make use of hard drive space. The coin itself is not mined, instead they give you coins based on how much hard drive space you give them, their coin itself is on top of the Mastercoin blockchain, so they don’t have their own blockchain either.

BURST is MINED on hard drive space by “plotting” hard drives. The plotted space is then used as “hashpower” of sorts, and that is what generates your coins. Right now BURST is not making use of the hard drive space other than to create your power for mining the coin and securing the blockchain.

BURST has it’s own blockchain.

BURST will eventually be making use of the space as well, so it will be like storj with the added benefits of having it’s own blockchain, and actually MINING the coin on hard drive space.

The theories behind each coin are close on the surface, but very different in reality.

BURST is focusing on MINING on hard drive space, and making use of their decentralized marketplace, asset exchange, and the newly implemented Automated Transactions, which is HUGE, and new technology that other coins are TRYING to do, and so far haven’t accomplished.

Like I mentioned though, BURST WILL have storage on the plotted space eventually, as it is on the roadmap. At that point there will still be many differences between the two coins, but they will both have the ability to store files.

As of right now the coins are basically different in almost every way.

5. Is there a demand for decentralized file sharing? Why do you think so?

I believe if someone is looking for a reason for decentralized file storage they need to look no further than the recent celebrity picture hacks that took place last summer.  Celebrities private pictures were exposed to the general public because their files were stored in a central location. This central location makes it easier for “hackers” to focus their efforts on one target and gain access to private material. If those files were stored on a decentralized system there is nothing to “hack” no central storage location to gain access to.

Decentralized file storage is yet another proof that Bitcoin has multifaceted application in the real world. With coins like Burst, more people are benefiting from the advantages cryptography can provide.

Do you use Burst? Do you mine the POC algorithm? Let us know in the comments below!