Bitcoin and altcoins have taken another serious dive Monday as a Chinese sell-off sent prices plunging up to 15% in hours.

In what was a widely-predicted move downwards, Bitcoin fell from highs of over $3000 on GDAX to drop through $2700, trading around $2580 at press time according to average prices on CoinMarketCap.

Talk among experts pointed the finger at futures sales from Chinese exchange Okcoin, with charts showing Ethereum also reversing its recent surge over $400. 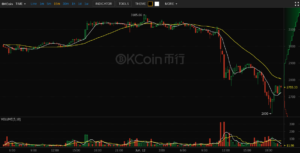 In line with behavior witnessed in recent weeks, the majority of leading altcoins followed Bitcoin, losing up to 15% of face value.

End Of The Latest Bitcoin Bullrun?

Nonetheless, reactions to the falls showed confusion among commentators. Responses to ARK’s Chris Burniske highlighted the simple fact that Bitcoin’s recent bull market would sooner or later need to end.

Lots of red 4 #cryptoassets after an enthusiastic weekend. Understand some of the skittishness given the attacks but why's #bitcoin knifing? pic.twitter.com/0ncDxrSPFD

Bitcoin had breached the psychological barrier of $3000 per coin on some exchanges prior to Monday, yet compared with $2000 in May, traders appeared to find keeping above that level considerably more daunting.

While forecasts from figures such as Vinny Lingham and Max Keiser gave the impression the real hurdles would be $5000 and upwards, the lack of momentum to sustain ‘B3K’ suggests that crypto optimism is finally finding its new niche. This, others point out, may not be such a bad thing.

The timing of the sell-off for Ethereum is particularly poignant.

Monday saw the ICO from ETH Blockchain startup Bancor raise an astonishing $150 million in three hours, a new record for even the hugely successful fundraising campaigns seen in the Blockchain industry this year.

On Sunday, Twitter personality and cryptocurrency bagholder WhalePanda published an extended blog post detailing why Ethereum’s “sole use case at the moment is ICOs and token creation.”

What’s driving the Ethereum price? Greed. Greed from speculators, investors, and developers […] Can you blame them? Speculators and investors: No. Developers: Absolutely.

As of press time, neither Bitcoin nor Ethereum appeared to have “bottomed out,” continuing on to test $2500 and $300 respectively.

Rounding out the Ethereum post, WhalePanda delivered some timely advice for traders across crypto assets:

If you’re a trader or investor, be realistic about the bubble. I know you hear this 100 times when you’re trading but: don’t invest what you can’t afford to lose.

What do you think about Bitcoin, Ethereum’s latest price drops? Let us know in the comments below!