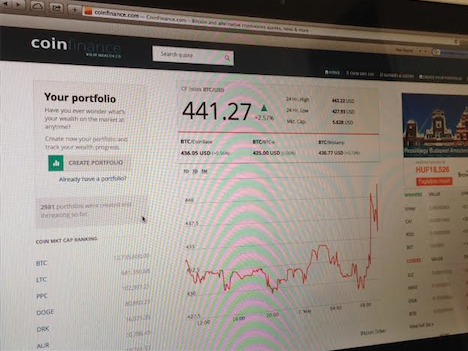 by Bitcoinist
in Altcoins, Bitcoin, News
0

Coinfinance.com is a new analytical and informative website about bitcoins and alternative cryptocurrencies, such as Litecoin, DogeCoin, and AuraCoin. The platform currently supports 353 cryptocurrencies. The provided data allows visitors to have a clear outlook on an economy, based on bitcoin.

The website is simple and clear to read and explore, where its front page has a chart that details the evolution of bitcoin’s price and compares it to the most popular exchange websites. It also includes a homemade bitcoin index called “CF Index.”

One of the most useful features of the website is the possibility to create cryptocurrency portfolios in a secure and anonymous fashion, thereby perpetuating the whole ideology behind bitcoin. Understanding that this new economy is supported by its community of users, including developers and bloggers, CoinFinance also released a widget, which can be embedded on any website, and shows real-time and historic data on any cryptocurrency.

CoinFinance bases its price change percentage of each cryptocoin according to their activities during the last 24 hours. This way, the website makes a real-time ranking of the cryptocurrencies that have had the best growth or worst decline over the last 24 hours. Each cryptocurrency has its own independent economy, as well as total market value and total amount of units in circulation. For instance, if bitcoin is valued at 463.77 USD and there are 12,693,425 units on circulation, the market value is 5.8 billion dollars. CoinFinance displays a list of the most popular cryptocurrencies based on market value, giving users a big-picture view of the prices on each market.

In each cryptocurrency’s internal page, there is detailed information about its price conversion to different currencies (US Dollar, Euro, and Chinese Yuan), percentage change, and mining details. Visitors can also get the price evolution for any cryptocurrency for any time period they choose.

The cryptocurrency-related news is important, for it plays a decisive role on the market behavior. Considering this, each cryptocurrency has its own news section, allowing users to make well-informed decisions quickly.

The CoinFinance team will continue to make developments and add new features. Currently, the developer team is making final touches to the mobile app, which will be available for both iPhone and Android users. In the near future, they are going to release an API to allow the developer community to access the information available on the website.

CoinFinance was developed by a team of designers and web developers based in Asuncion, Paraguay. This team has more than ten years of experience on the development of mobile and web apps. Among these web apps isInstallThisApp.com, which is a tool used by people from more than 130 countries to run promotions and contests on Facebook fanpages. To learn more about CoinFinance, please go to http://coinfinance.com.