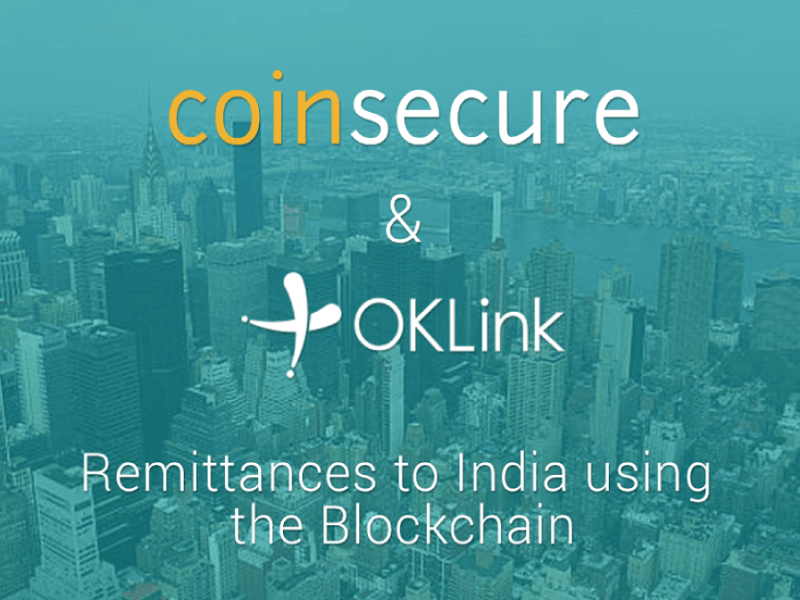 Coinsecure and OKLink Partner for Bitcoin Remittance Service in India

This partnership is part of an initiative by the new OKLink service to “provide [a] digital assets and blockchain based global transaction settlement system,” Coinsecure said in a press release.

Furthermore, the company said, “with India being the largest inward remittance receiving country in the world, this partnership marks a huge milestone for Bitcoin and blockchain technology.

The company told press that this partnership was first announced at the IMTC Asia Conference in Delhi, India, by Coinsecure CTO Benson Samuel and OKLink chief strategy officer Jack Liu.

“We at coinsecure not only recognize Bitcoin as the most important application of blockchain,” Samuel said, “but also its potential role in alleviating global transaction woes.”

“Remitance will work over the network created by OKCoin called OKLink. It will enable Indian citizens to send or receive funds either in Bitcoin or Indian Rupees from countries around the globe such as China Hong Kong, Korea, Canada, Philippines and many more.”

Coinsecure is an Indian Bitcoin company that focuses on education and acceptance among individuals and business in the country. According to the company, they are “responsible for the country’s first and only INR based blockchain explorer.”

OKLink, recently launched in August 2016, is a project by bitcoin exchange OKCoin. This service focuses on remittances, aiming to give “every payment remittance and payment company the same cost advantage, global reach and speed of Western Union,” according to a press release.

The service provided by this partnership will soon be available on Coinsecure’s website, the company told press. The mobile application will follow the website launch. Once the service goes live, Coinsecure says it will charge a fee of 0.5 percent per transaction. The company said this fee is very low compared to “[traditional] rates of 3-5%.”

What do you think about this new partnership? Let us know in the comments below.