Sports engagement in crypto and blockchain tech this week was a bit on the quiet side, but there was still plenty of new deals and discussions to cover. That’s what we do every Sunday with The Sports Slice.

This past week, former baseball superstar Alex Rodriguez shared his bullish perspective, another bank is entering the metaverse – and wants sport to be a major focus, and more. Let’s review.

A new report from Bloomberg this past week cites former MLB superstar Alex Rodriguez at a recent Futures Industry Association, where the longtime New York Yankee joined crypto executives such as FTX CEO Sam Bankman-Fried, and showed cleared optimism around the potential of blockchain technology in sport. Rodriguez was quoted saying that he sees a time in the near future where “millions of people around the world will have an opportunity to own a sports team, if not a small stake in one. We don’t have that opportunity [now], but tomorrow I think we will.”

HSBC Bank Secures Land With The Sandbox, Wants To Focus On Sports & Esports

HSBC is a major banking conglomerate with nearly $3T in assets under management (AUM) – and yes, that is a T as in trillion. On Wednesday last week, HSBC became the first bank to secure property on The Sandbox – and said that it will use the digital property to look to engage with sports and esports fans. In February, JP Morgan secured property with Decentraland.

How exactly HSBC will connect with a sports and esports-centric audience is yet to be determined, but don’t be surprised to see them tap in with existing sports endemic partners, like the World Rugby Sevens Series or the LPGA Tour.

The irony of major banking powerhouses entering crypto should not be lost on the crypto community – but adoption is adoption.

FanCraze is a cricket NFT marketplace built on Flow – the same blockchain used for Dapper Labs products like Top Shot and NFL All Day. A new report first released from Bloomberg on Friday revealed that FanCraze is raising $100M in Series A funding, with backers that include soccer legend Cristiano Ronaldo.

FanCraze already has a deal secured with the International Cricket Council (ICC) and is positioned well to be cricket’s equivalent of what we’ve seen from similar Flow products like the aforementioned Top Shot and NFL All Day. 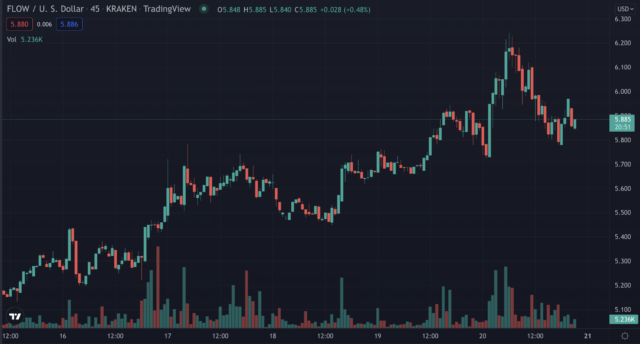 Our team at Bitcoinist earlier last week shared the details of financial giant deVere Group’s new NFT platform, titled dV Gems; this platform is kicking off with sports NFTs in partnerships with NBA and Formula 1 partners. A deVere Group representative described NFTs in the sports industry as a “golden money-making opportunity” and a way for “fans to engage with their favorite teams, athletes and historical moments.” We would argue there’s even more opportunity than just that – but it’s a great starting point.

Regarding the new marketplace, deVere Group CEO Nigel Green had this to say:

NFTs are an exciting new asset class and they shouldn’t be ignored or dismissed by those wanting to seriously build wealth for the long-term. These digital assets are immutable and exchangeable, offering a store of value and potentially decent source returns.

It’s March, and if you’re a college basketball fan, it’s probably your favorite time of year. As DraftKings continues to maintain an aggressive stance in engaging with blockchain technology, the mobile sports betting firm unrolled it’s new NFT series, the ‘2022 College Hoops Collection.’ The firm will utilize it’s DraftKings Marketplace to roll out 8 unique NFTs, with a 9th available as an airdrop to holders of all of the first 8.

DraftKings co-founder Matt Kalish had this to say about the new series:

“DraftKings is already deeply embedded within the biggest moments in sports, and the new Primetime NFT Series will further drive engagement while also providing rewards that bridge to our gaming offerings for the first time… few times on the sports calendar can match the drama and spectacle of March’s college basketball tournament, which is why we chose this month-long event to initiate this new digital collectibles program.”