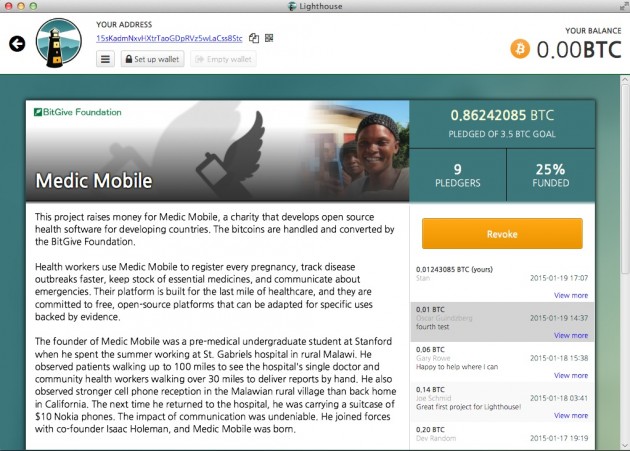 Lighthouse, a decentralized crowdfunding platform, was first announced almost a year ago by Bitcoin core developer Mike Hearn. The project kept a low profile, but the Bitcoin community has been anxiously waiting for the project ever since it was announced. Finally, the project launched on January 20, almost an entire month into 2015. The Bitcoin wallet needed to use Lighthouse can be downloaded for Mac, Windows and Linux operating systems.

Lighthouse is the world’s first decentralized crowdfunding platform built on the Bitcoin blockchain. Users will now be able to raise and donate to crowdfunding campaigns with Bitcoin and pay no fees. On top of that, they will not have to ask for any permissions from third parties for to run their campaigns. Furthermore, funds can not be frozen by any third party administrator, like in the case of encrypted mail provider, Proton Mail. Paypal stopped the project from withdrawing their funds after the company successfully raised $328,000.

The first project on the platform is Mobile Medic, a non-profit organization that provides data and notifications for health care workers in developing countries. The campaign hopes to raise 3.5 BTC and is currently just under 1  bitcoin. 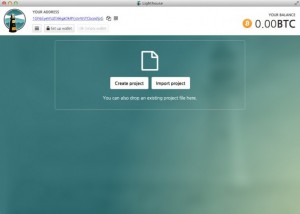 To access a project, you must download the project’s particular file to your Lighthouse wallet. The files can be found on the project’s website; the Lighthouse app does not have a list of all the projects or ability to search for them. 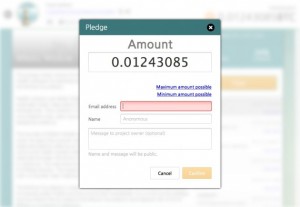 Downloading the file will give you access to the project’s crowdfunding page. Details about the project, including how much Bitcoin has been raised, can be seen from the page. You will also have the ability to donate from that page as well.

You can create one from the Lighthouse wallet. The steps to make it are as simple as filling out a social media profile.

To create a project on the platform, you do not need to a server, like with Bitcoin. But when you turn off your computer, your project will not be able to be found. Hearn suggests for serious projects to host a server to keep their project up 24/7. Currently, there are two servers that can be used by the public — one ran by by Vinumeris and another by OneTap Software.

The Motivation Behind Lighthouse

“We as an internet community, don’t need public figures to decide what’s good for us. We need to stop politicking and start focussing on the projects directly. For example, we need a project to fund the core development of bitcoin, and put our money straight to that. We need a project to have lobbyists in Washington, to fight the anti-bitcoin lobbyists from Mastercard, and to prevent the government from destroying the currency. Basically, we don’t need another intermediary. We can do this ourselves.”

Janssens announced a $100,000 bounty in early 2014 for developing a piece of software to replace the Bitcoin Foundation:

“I am thinking of a system where prominent people can voice their opinion, where people can propose projects, and where the core devs can actively show their roadmap with detailed features + costs, and where we can vote on the features being implemented by sending bitcoins towards the feature of our choice. This will allow the core dev team to expand by being able to add/pay more devs for feature requests which are fully funded.”

$60,000 of that bounty was awarded to Mike Hearn for creating Lighthouse, while the remaining $40,000 was awarded to Eris Industries, a project developing a decentralized smart contract platform.