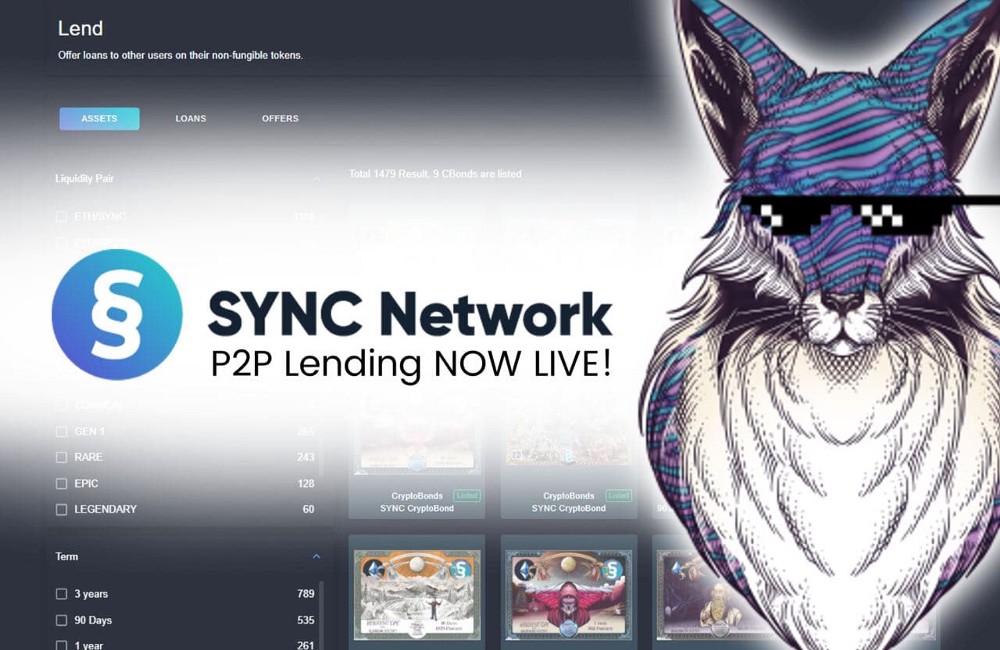 The DeFi and NFT platform, SYNC Network, recently announced the launch of peer-to-peer lending on its platform to offer heightened security to lenders.

SYNC, the Ethereum-based platform, aims to mitigate risk and bring stability to the DeFi space with the help of time-locked, reward-generating NFTs called CryptoBonds. To put this into perspective, the value of 1,800 CryptoBonds created so far has seen an average increase of over 203%, which easily covers the recent downtrend in crypto that led SYNC to drop by 75%.

Ever since its inception, SYNC has seen steady growth and has recently managed to bag collaborations with some prominent names in the DeFi space such as TrustSwap (SWAP) and DexTools (DEXT). Now, in a recent development, the SYNC Network announced the launch of 100% secure peer-to-peer lending on its platform.

The platform claims that this move is enabling users to lend and borrow capital on CryptoBonds in a trustless manner. Borrowers on the platform can use the CryptoBonds, which consist of the liquidity pair and equivalent SYNC tokens, as hard collateral to borrow capital. Within the SYNC ecosystem, the duration of the loan and the rates of interest are dynamic and are agreed upon by the borrower and lender.

According to the developers of the SYNC Network, this method of lending against a CryptoBond can provide unprecedented levels of security for lenders and borrowers alike. Borrowers on this platform are not subject to minimum collateral maintenance. If the value of the collateral fluctuates during the course of the loan, borrowers do not get liquidated.

For lenders, the collateral is stored in ESCROW for the duration of the loan. If the borrower fails to pay the loan, the lender becomes the new owner of the said CryptoBond, protecting the lender from financial risk.

The lender also gets a promissory note NFT — a debt note much like real-world promissory notes is a tangible representation of the loan. If at any point the lenders want their lent sum of money back before the specified maturity period, they can sell their NFT on an NFT marketplace. The user who buys their NFT would become the new lender while the previous lender would get back his funds without the liquidity being disturbed.

The introduction of P2P lending against a new asset class — CryptoBonds — could potentially create a safe space for both borrowers and lenders. It can strengthen the DeFi ecosystem by ensuring that the liquidity in the CryptoBond is untouched through the entire ordeal.

While the SYNC Network is currently deployed on the Ethereum mainnet, the platform is working on a version 2 (V2) network that could come with multichain and multi DEX functionalities, taking a big leap into the wider DeFi ecosystem.

The rise of the staking culture in DeFi has opened up new possibilities for projects and traders in the ecosystem. Staking has become a popular way for DeFi projects to create liquidity and build a trustless network, whereas, for traders, staking presents new opportunities to earn rewards with their assets. This simple mechanism became so popular that ETH holders have recently staked $14B worth of tokens on the newly launched Ethereum 2.0 network.

Despite such popularity and success, the present-day staking mechanics are one of the biggest contributors to the volatility in the ecosystem. Staking platforms allow users to withdraw their funds at any given time, creating a lack of liquidity and a downfall of otherwise promising projects. The SYNC Network, however, claims to have found a solution to evade this problem.

The network introduces a new asset class CryptoBonds that are reward-generating, time-locked NFTs.  A CryptoBond consist of two halves — the first comprises liquidity pair tokens and the second comprises the equivalent value in SYNC tokens. Users are first required to provide liquidity to Uniswap to receive the corresponding LPTs. Then these LPTs are locked along with an equivalent amount of SYNC tokens to create a CryptoBond.

Users can create CryptoBonds for a fixed time frame that lasts anywhere between 90 days to three years. These bonds rake in revenue from liquidity provision and also interest on the SYNC part of the bond. Once the bond is matured, users can pocket the locked SYNC tokens and also the newly mined SYNC tokens. The longer the duration of the bond, the higher is the APY on SYNC, therefore incentivizing long-term liquidity providers. The SYNC Network says that these rewards can outweigh regular staking rewards.

Users who want to exit their position before the stipulated time frame can simply sell their CryptoBond on NFT marketplaces as CryptoBonds are still just NFTs at their core. The liquidity locked in the bond remains untouched through this entire ordeal, creating a sense of stability for investors and projects alike. They can also use the bond as collateral for a loan on P2P.

What Does the Future Entail?

CryptoBonds, though relatively new to the marketplace, has seen substantial success so far. There are over $6M worth of crypto locked across all 1800 bonds that have been created. By making them the staking standard in DeFi the projects in the ecosystem will have a fool-proof way of incentivizing long-term stakers and farmers in the network. Time-locking liquidity ensures that only serious users get on board, effectively avoiding pump-and-dump episodes. This, in turn, mitigates risks for investors and creates a safe space for all players of the ecosystem.