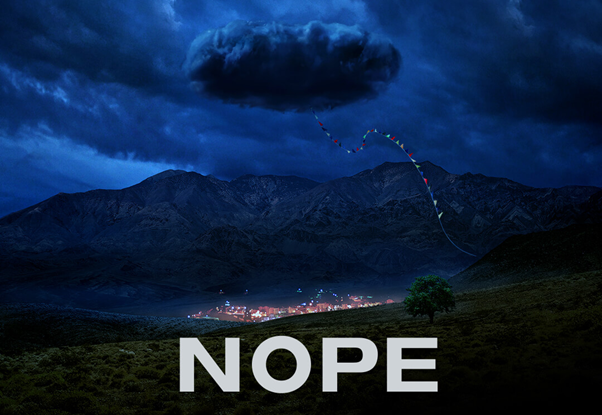 Did You Miss This Clue in Jordan Peele’s ‘Nope’? Ethereum, Decentraland, and Big Eyes Coin Could Have the Answers

Be careful! The following article contains some ‘Nope’ spoilers so you might want to come back after you’ve seen the movie. We wouldn’t want to spoil anything before your first viewing!

Jordan Peele’s latest movie has hit cinemas with a bang this summer. It feels like every other person I meet is begging to unpack what happens in ‘Nope’. Jam-packed with hidden gems, easter eggs, and deeper meanings – there’s no doubt that once again Peele has pulled it out of the bag.

‘Nope’s’ central character OJ Haywood, played by the Oscar-winning Daniel Kaluuya, inherits his father’s horse ranch at the beginning of the movie. It soon becomes apparent that some extra-terrestrial activity is happening above the land and his money-savvy sister Emerald, played by Keke Palmer, suggests that they get an ‘Oprah shot’ of the aliens to earn them both fame and riches. Peppered with deeper hidden messages such as the dangers of animal exploitation, voyeurism, and fame, this is one of those movies that just keeps giving every time you watch it.

We’re specifically interested in a blink-and-you’ll-miss-it crypto mining scene that happens around halfway through the movie. Seeking refuge from the aliens above their house, Emerald and OJ stay with a newfound tech friend named Angel Torres, played by Brandon Perea. While inside Angel’s room, we see a rack of processors rigged to a computer and cooled by multiple fans. It appears that Angel is crypto-mining.

Angel’s character is introduced as an ordinary tech-store employee who visits the Haywood’s house to install some new cameras. However, his vitality to the plot soon becomes clear as his knowledge and interest in alien conspiracy theories keep bringing him back, while his tech experience is essential for the Haywoods.

Why is Angel’s crypto-mining relevant to the plot of ‘Nope’?

It makes sense that techy Angel would be trying to earn a little extra money mining crypto, after all, the crypto background certainly fits his room perfectly. His character looks right at home amongst the processors and computers rigged together.

Despite his goofy introduction, it becomes very quickly clear that Angel is highly capable when it comes to rigging cameras and complicated tech, a vital skill by the end of the movie. Perhaps the crypto mining shot is a hint at his future capabilities. Or perhaps it’s to show a financially driven personality behind his lax exterior, explaining an ulterior motive to helping the Haywoods get their ‘Oprah shot’. Many people are turning to crypto as a way to earn passive income alongside their main income, was Angel more financially driven than he first appeared?

Angel’s character is also shown using a Razer laptop, which is a popular gaming brand. Cryptocurrency and gaming often go hand in hand, with coins such as Decentraland (MANA) centered on gameplay earnings. Angel’s character clearly represents the tech-savvy future of finance, where people can make income by mining and gaming on crypto platforms. Angel could be representing the new norm for everyone.

The Who’s Who of Crypto

If you want to be like Angel, earning a passive income and entering into the future of finance, you’ll need to know how it all started. By now, almost everyone has heard of Bitcoin (BIT), made famous for its huge spike in value and subsequent durability. However, there are a series of successful altcoins just behind Bitcoin, with lots of future potential as the crypto-verse grows.

Unlike Bitcoin, Ethereum (ETH) is programmable, enabling users to build apps that use its blockchain. As a result, Ethereum has a general-purpose blockchain that can be programmed to do anything. Essentially, Ethereum gives users the space for great innovation. On the other hand, Bitcoin is only a payment network, with much less malleability. Ethereum instead exists as a marketplace of financial services, social networks, apps, and games.

There are a few essential elements of Ethereum (ETH) that make it more appealing to a wider audience than fiat finance (pounds, euros, dollars). With cryptocurrency, everyone who has an internet connection can access its financial services. It’s also more private. Unlike traditional banking, you don’t need to provide all of your personal information. Ethereum (ETH) claims to be an economy ‘based on value, not surveillance’. It’s also a peer-to-peer network, meaning that it cuts out the middleman when moving money or making agreements with someone else.

Cryptocurrency in general is very popular because it avoids government control. Ethereum, for example, is censorship-resistance. No government or company has any control over the receipt or delivery of Ethereum payments.

Could Angel Be Using Decentraland (MANA)?

We know that ‘Nope’s’ Angel was into crypto-mining and that his computer brand suggests he was a gamer – could he be mixing the two? Decentraland (MANA) does exactly that. Considering that he uses VR goggles at one point in the movie, it’s clear that he’s a fan of virtual reality. Decentraland (MANA) allows its users to create, explore and trade in the first-ever virtual world that users can own with their crypto tokens – and we bet that Angel was a user!

Just like with Peele’s movie itself, Decentraland (MANA) users can lose themselves in an amazing world. Testing the limits of our imagination, Decentraland enables users to create incredible scenes, artworks, and challenges through their Builder tool. Land can be bought, sold, and traded on the platform, as well as Avatar wearables in the Decentraland marketplace. The potential of this space is limitless. Imagine what Peele could make on the platform…

What’s New in the Crypto Scene?

For anyone new to crypto, there are several exciting projects to get involved with. One of these is Big Eye Coin (BIG). Currently in its presale stage, this coin has a lot of promise. With a cute crypto cat mascot, Big Eyes Coin brings the joy of virtual reality to finance.

This coin is centered on community connection. With no buy tax, no sell tax, and no fees, Big Eyes Coin (BIG) is focused on ease of access for everyone. The Big Eyes Coin crypto cat mascot is one with ‘cattitude’. There are no dogs and no masters in this currency, instead 90% of tokens will be available to the community on Day 1, ensuring a democratic and decentralised organisation. To maintain a community feeling, Big Eyes Coin also has an NFT Sushi Crew. Users just need to purchase a special sushi NFT to gain access to Big Eyes Coin(BIG) events and merchandise.

For anyone inspired by Angel’s crypto mining in ‘Nope’, Big Eye Coin (BIG) provides the perfect entry into the crypto world. Launching soon, this is a coin you’ll want to catch in its presale stage – before it skyrockets up the ranks and reaches the heights of Ethereum (ETH) and Decentraland (MANA).