Digital Scarcity: How Ethereum is Beating Bitcoin At Its Own Game

by Best Owie
in Ethereum, Bitcoin
0

Ethereum has long been put against top crypto Bitcoin for the majority of its existence. The fact that the former possesses more use cases has led a lot of investors to believe that it will be more valuable than bitcoin in the long run. When it comes to performance, Ethereum has actually lived up to investors’ expectations of it. Outperforming bitcoin year on year for the last couple of years.

While performance metrics remain important, Ethereum has moved the competition into broader spaces. It is no secret that exchange reserves have been plummeting this year. Leading to never before seen levels in a bull market. Outflows to exchanges have far exceeded inflows, suggesting that investors are accumulating rather than selling their coins.

In this same vein, Ethereum exchange reserves have fallen lower than that of bitcoin. Both assets have shown increasing levels of coin scarcity but metrics point to Ethereum scarcity levels being higher than that of Bitcoin.

Ethereum, on the other hand, had exchange balance levels relative to its circulating supply sitting at a shockingly low 12.93%. This means that the liquid ETH supply in the market has fallen below bitcoin.

Centralized exchanges have been the hardest hit with outflows. Exchange reserves have been down not just in the top two cryptocurrencies, but also across the altcoin market.  The chart below shows a macro trend of ETH and BTC and their increased scarcity over time. 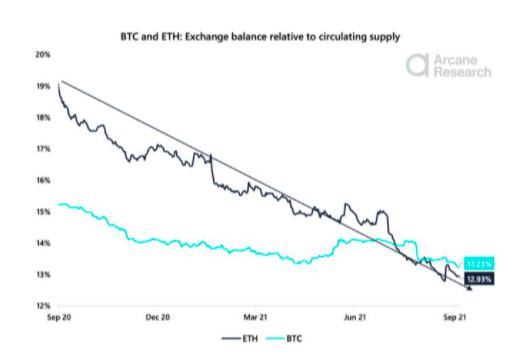 Factors That Could Counter This

Nonetheless, the data still shows that ETH is becoming more scarce on centralized exchanges. Leading to more scarcity on these avenues than there is for bitcoin. At the time of writing, ETH is trading at $3,366 and bitcoin continues to trade at $45,700.