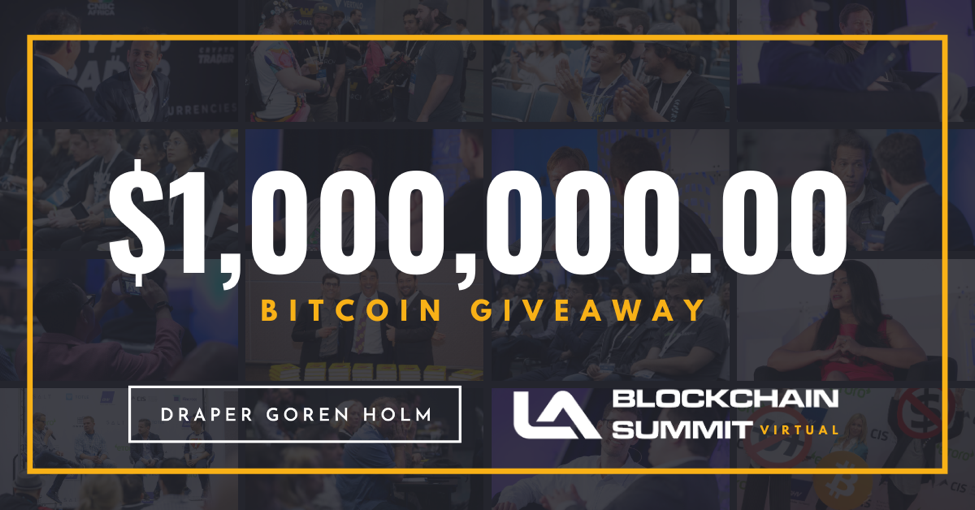 Los Angeles, CA – Billionaire investor Tim Draper’s venture studio Draper Goren Holm today announced their annual flagship event LA Blockchain Summit will no longer be held at the Los Angeles Convention Center, and instead, take place virtually from October 6-7, 2020. The West Coast’s largest industry conference that tens of thousands have grown to know and love is going completely digital due to COVID-19 and the importance of prioritizing attendees’ safety.

To commemorate the summit going virtual, the LA-based venture studio is spearheading the largest bitcoin giveaway to date by awarding the first 10,000 qualifying registrants with $100 in Bitcoin for attending the conference.

Josef Holm, Founding Partner of Draper Goren Holm and Co-Founder of LA Blockchain Summit, stated, “With everything going on in the world right now, LA Blockchain Summit’s mission stands strong as we’ll continue pushing all of our efforts to help pave the path to cryptocurrency and blockchain technology mass adoption, regardless if we do it in-person or virtually.”

$1 Million Worth of Bitcoin Up For Grabs

Inspired by the global opportunity to stimulate mass adoption and advance the holdings of crypto-curious individuals, Draper Goren Holm is giving away a free $299 ticket to the summit and $100 in Bitcoin to the first 10,000 qualifying attendees for a grand total of $1,000,000.00.

Tim Draper, Special Limited Partner and Board Member of Draper Goren Holm, enthused, “We’re thrilled to spearhead the largest bitcoin giveaway in history and provide so many people with the opportunity to discover the power behind cryptocurrencies and blockchain technology. Come learn from the absolute best at LA Blockchain Summit and take advantage of receiving $100 in Bitcoin.”

Ready to claim your Bitcoin? Learn about the details of the promotion here.

“Taking LA Blockchain Summit virtual poses a ton of new opportunities to impact the lives of more crypto and blockchain-interested individuals so we couldn’t be more excited to expand on our reach, efforts, and work towards creating immense value for thousands across the globe,” added Alon Goren, Founding Partner of Draper Goren Holm.

With the event over five months away, thousands of attendees have already registered to attend the two-day event that will feature 300+ speakers, multiple digital stages, a Call for Papers track featuring the most prominent academic researchers, developer and technical-centric discussions, as well as one of the most significant and most accessible virtual networking opportunities available online.

Adam Levy, Operations Manager at Draper Goren Holm, added, “There’s no better way to learn more about the industry than by having some skin in the game, so we’re excited to provide thousands with the opportunity to learn at LA Blockchain Summit and for thousands to get $100 in Bitcoin.”

Get a free ticket to LA Blockchain Summit and qualify for $100 in Bitcoin by learning more here.