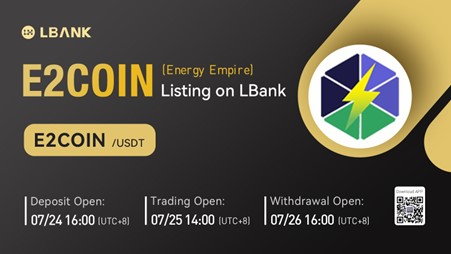 Aiming for human coexistence with pride of creating the future, Energy Empire (E2COIN) builds the best blockchain platform to participate in and benefit from energy efficiency projects. Its native token E2COIN has been listed on LBank Exchange at 14:00 (UTC+8) on July 25, 2022, to further expand its global reach and help it achieve its vision.

Energy Empire is a project that connects three areas with enormous potential: Renewable energy generation, Blockchain and People. Growth and development in each of these fields is important for the quality of human lives, but joined together into a new, disruptive model of energy trading, they have the power to make the planet earth a better place to live in.

The new business model of Energy Empire disrupting the energy sector utilizes blockchain to take over the role of the middle man as a technology infrastructure, which can be trusted by default since any and all transactions on the blockchain are peer-to-peer reviewable. And by building a platform that directly connects power generators and consumers into its DApp based on smart contracts, Energy Empire provides a new, exciting and positive approach toward peer-to-peer power generation and trading.

There’re several eco-friendly energy generation projects linked to Energy Empire, including wind energy, hydrogen energy, waste energy, fuel cell, and so on. Supporting Energy Empire means supporting sustainability because it brings together energy producers and consumers with common interests: to save money and to create a decentralized, smart and clean future.

In addition, the NFT concept is also a perfect fit for the power generation industry. NFT not only expands its boundaries but also changes the equity distribution model of energy assets. Energy Empire has identified early and is trail blazing the market with its NFT-solution. It will develop a blockchain-based NFT platform that enables investors to issue, sell and exchange the electricity generated by NFT or to distribute energy assets by exchanging E2COIN. Unlike other crypto ecosystems and networks, the Energy Empire NFT marketplace will be operated by smart contracts.

With a vision of supporting a global self-sufficient energy community based on renewable energy and peer-to-peer energy trading based on the blockchain and smart contracts, Energy Empire creates an ecosystem that contributes to greater independence when it comes to energy.

E2COIN, the native digital utility token of the Energy Empire platform, is a major component of the Energy Empire ecosystem, which enables people from all over the world to invest in a fast, reliable, scalable, and environmentally friendly way. E2COIN is issued as a BEP-20 standard-compliant digital token on the BSC, and it is designed to reward participants who interact within the E2COIN trading platform. E2COIN will be used as a utility crypto asset in the NFTs industry, and NFTs market will be traded with E2COIN in the near future.

LBank Exchange, founded in 2015, is an innovative global trading platform for various crypto assets. LBank Exchange provides its users with safe crypto trading, specialized financial derivatives, and professional asset management services. It has become one of the most popular and trusted crypto trading platforms with over 7 million users from now more than 210 regions around the world.