Bitcoin 2.0 has emerged from the altcoin craze and is offering interesting new applications for Bitcoin. These are projects and companies  are looking to capitalize on Bitcoin’s distributed network and build non-financial applications. Moving on from use cases derived from the technology’s currency and payment network, these groups are looking to use the “written in Stone” qualities of Bitcoin’s global ledger, the blockchain.

Out of the numerous projects and companies that have popped up, Tether and Factom have emerged as some of the leading Bitcoin 2.0 companies. Factom has made headlines because it allows large sets of data to be stored in the blockchain. While storing data isn’t anything new, Bitcoin’s limit on the amount of data that can be stored hindered bigger and more serious players from getting involved. Factom is able to squeeze large amounts of data to a single hash, that then can be stored in the blockchain. 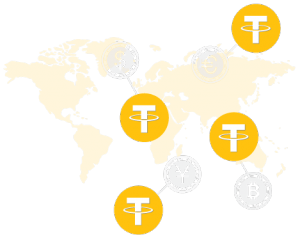 Tether on the other hand, “pegs” bitcoin, the currency, to fiat through a token currency. The project claims to give users all the benefits of bitcoin — cheap, security and fast transactions — while being able to benefit from the fiat currency’s stable store of value.

Today, the two projects have announced that they have entered into a partnership to share each other’s technologies.

Factom will be using Tether as a hedging mechanism against Bitcoin’s infamous volatility in the company’s upcoming sale of its Factom software.

Paul Snow, Factom Foundation’s CEO, stated “It’s important to us that the community be confident that the value contributed during the token sale will be preserved and Tether plays an important role in how we accomplish that goal.”

The partnership is validation of both companies’ projects. Tether has been developments for a better half of year but still remains in a closed beta. Factom is newer but they have still yet to get their software sued by large companies or in important scenarios, such as verifying Tether’s financial transactions.

What do you think this means for the future of the two companies?

Photos courtesy of Factom.com and Tether.to