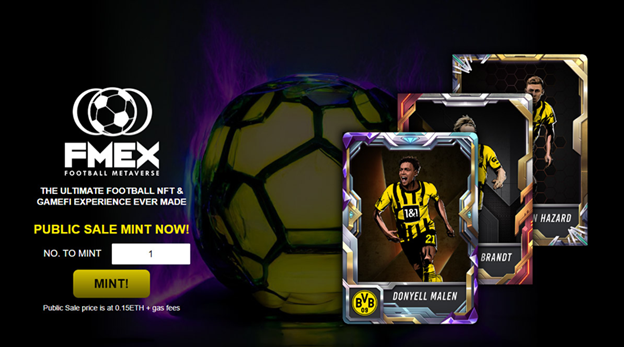 The last several years were not particularly great for anyone, and that includes the sports fans. Due to COVID-19, a lot of major and popular sports events were canceled or delayed, and now, at the end of 2022, it is exciting to see things getting back to normal.

The World Cup 2022 is a particularly interesting event as it will be the first time in its history that it is taking place during the winter season, starting on November 20th, which is in about 10 days from the time of writing.

Obviously, everyone is quite excited about the upcoming event, and many are starting their own initiatives in celebration of it. One example is FMEX, which recently announced that it would launch an exclusive set of soccer-based non-fungible tokens (NFTs) in collaboration with Borussia Dortmund (BVB). The official launch and mint date were yesterday, November 9th, and the minting is happening right now. However, the NFT collection is only the beginning.

According to FMEX, the company decided to add extensive utilities and fan rewards as part of the collection, which is meant to help it revolutionize the sports NFT market. More than that, the platform hopes to provide some warmth to the current crypto winter which, despite the recent price surges, still strongly dominates the world of digital assets.

What is known about the collection?

The collection, commonly known as the BVB NFT collection, consists of an entire series of mystery boxes, which are divided into six rarity tiers. The tiers include Common, Uncommon, Rare, Super Rare, Ultra Rare, and Secret Rare. Obviously, the Common tier is the least valuable, while the Secret Rare is the most valuable, and the most scarce. But, despite that, each of the tiers has its own benefits.

The project also stated that the rarity levels will be kept hidden until the release date, at which point users will be able to see which of the tiers they managed to get. That way, it’s all based on chance, and no one will tarted a specific tier and take away other buyers’ opportunity to get them, as well.

As for the benefits that will be accompanying the different tiers, they include the following.

The benefits based on NFT tiers

The top 3 tiers, or the Rare tiers, as they are called, include Super Rare tier, Ultra rare tier, and Secret rare tier. Those who get these NFTs will have access to FMEX’s exclusive benefits, which no one else has access to. They will have access to things such as exclusive BVB merchandise, like signed jerseys, but also things like high-level in-game benefits, higher staking bonuses, tickets to international matches, and much more.

These tiers are meant to be the most rewarding, and they are expected to be purchased by the most dedicated community members and sports fans. Of course, that does not mean that the company did not save anything for the other three tiers.

Those who purchase NFTs with Common, Uncommon, and Rare tiers will still get some benefits that are also worth their attention. For example, some of the rewards for these tiers include WL seats for future launches, certain in-game benefits, the ability to engage in staking, and more.

But, more than that, FMEX wants to ensure users of 100% payback of the non-fungible token market price, and it came up with a pretty interesting idea for doing so. Specifically, the project will organize airdrops of its own FMEX tokens. The tokens are listed on some major exchanges, so they can easily be exchanged for a different cryptocurrency, or alternatively, users could keep them as an investment.

The idea is to use the tokens to ensure returns to NFT owners by granting them the equivalent value they bought for BVB NFTs. They will simply do it via airdrops by offering digital assets. According to the company, the price will be equal to the floor price, meaning that the first 3 tiers of NFTs will allow holders to acquire the non-fungible tokens for free. However, they will have additional utilities, thanks to the tiers’ high rank, so really, users will practically get a large number of benefits at no cost.

FMEX already believes that the launch of this collection will be a great success, and it is interested in creating even more football-related collections quite soon. It was also hinted that these future collections might come as part of some new partnerships with companies such as Andres Iniesta and Real Betis. The company will make sure to keep the community updated of its plans and new initiatives via its social media, primarily by its website and Twitter account, so anyone who does not wish to miss new announcements should keep an eye on both.