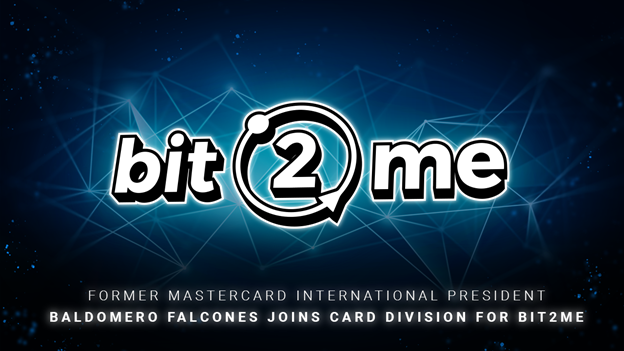 by Bitcoinist
in Press releases
96

26th August 2021, Madrid —  Bit2Me continues to add talent to its project. Baldomero Falcones, a Spanish executive with a long and recognized track record of professional achievement, will become part of the cryptocurrency platform’s team as Senior Advisor. His mission will be to expand Bit2Me Card, the company’s debit card service.

Among other management positions, Falcones was President of Mastercard International between 2002 and 2006, chairman of FCC, a construction company listed on the Ibex 35, and chairman of insurance area and director of operations at Banco Santander. He was a founder of Magnum Industrial Partners, a renowned venture capital firm in Spain and the largest in Spain and Portugal, dedicated to mid-market transactions in the Iberian Peninsula.

The Bit2Me Card offers the latest generation Mastercard card connected to the world of cryptocurrency. It can be held in both traditional plastic and virtual formats. The plastic version has NFC technology for contactless payments.

The incorporation of Baldomero Falcones as Senior Advisor coincides with Bit2Me’s launch on September 6 of its B2M token, which will be the largest ICO undertaken in Spain. The company has completed a previous private sale among investors reaching a record amount in our country, earning some 2.5 million euros. The holders of the token will receive benefits relating to Bit2Me products. Those interested in participating can do so via the official site.

“Innovation is the engine of growth for companies, investors and countries, and innovation is in Bit2Me’s DNA. It is essential for progress. It is the factor which convinced me to join this exciting project led by Leif and Andrei”,

Leif Ferreira, founder and CEO of Bit2Me, believes that:

“Baldomero will help us connect Bit2Me with the more traditional financial system. Our primary task is taking everyday cards to the crypto market in an exponential way. Our aim is for each new virtual currency we include to be incorporated into the Bit2Me Card.”

Andrei Manuel, co-founder and COO of Bit2Me, is sure that:

“Baldomero’s experience will take Bit2Me to another level. We seek excellence in the Spanish and international banking, financial and business sectors, and he will help us achieve it.”

Bit2Me is an industry-leading company in the cryptocurrency sector in Spain. Its Suite of services includes more than 20 solutions to buy, sell and manage virtual currencies and euros from a single place, safely and easily. The company has private customers, professionals, and companies in more than 100 countries and has managed operations worth more than €1 billion since being founded in 2015.

In January this year, FORBES magazine selected Bit2Me as one of the companies in Spain that will drive change in 2021. Since its creation in 2015, the company has received several awards in the financial sector such as ‘Winners of the World’, in the Visa-sponsored international competition; ‘Best Spanish startup 2015’, by CaixaBank; or ‘Best Business Model’ awarded by Deloitte. In addition, the European Commission has invited Bit2Me on multiple occasions to present and discuss Blockchain technology and bitcoin.

One of the first initiatives of the company after its birth was the creation of Bit2Me Academy, which trains more than 1.7 million students every year. Bit2Me Academy is currently the largest cryptocurrency training portal in Spanish, with more than 400 free articles, certified courses, and videos for those interested in learning about the birth, operation, and evolution of cryptocurrencies and the world of blockchain.

Bit2Me is the source of this content. This Press Release is for informational purposes only. The information does not constitute investment advice or an offer to invest.