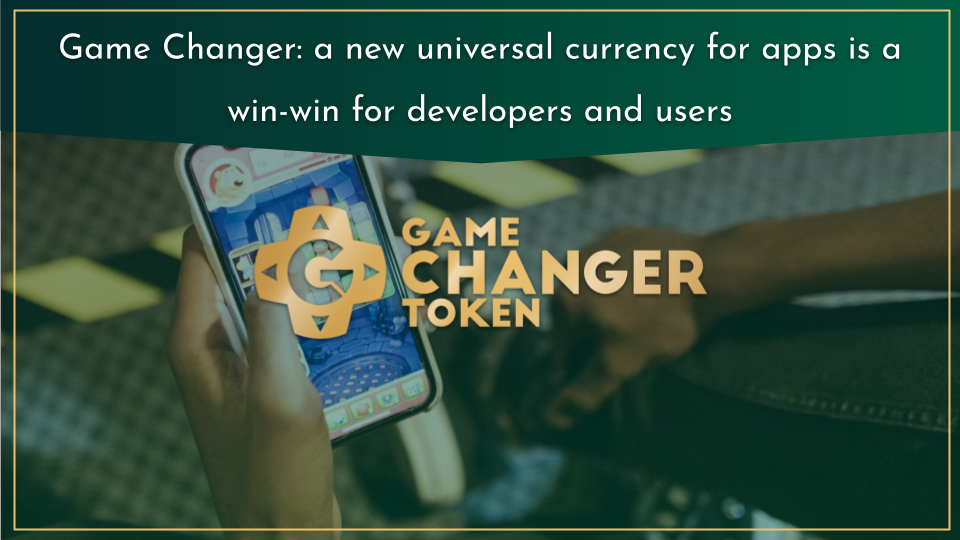 Game Changer: a new universal currency for apps is a win-win for developers and users

Despite its infant stage of development, blockchain technology has achieved some impressive improvements in speed and efficiency over the last years. The technology can now compete with traditional solutions in areas where it used to be inferior – such as transaction costs that were too high due to gas fees. Reaching a high degree of adoption by some of the biggest tech giants like IBM, the technology has already proven it is here to stay. It is only a matter of time before it penetrates the mobile industry and decentralized mobile apps start to appear. One project is already ahead of time with their novel cryptocurrency and blockchain-based app store.

An industry with an unlimited potential

Right now there are close to 4 million mobile apps for download on the Apple and Google Play stores. Buildfire forecasts that mobile apps will generate over $935 billion in revenue by 2023. Furthermore, according to PRNewswire, the size of the mobile app market will grow by over $650b in the period 2021-2025, resulting in a CAGR higher than 20%. Very few sectors can boast these levels of growth – one of them is the entertainment sector that currently surpasses 30% and is highly correlated to the mobile industry, since mobile games fall under the same category and are growing much faster than console and PC products.

Mobile devices are now used within virtually any sector we can think of, suggesting that our everyday lives in the foreseeable future will be underpinned by their role in the advancing levels of digitization. However, the mobile sector is not without problems – the market is highly fragmented, with only several key players occupying the leading positions and dictating the rules of the game.

The Game Changer project combines a multifunctional, blockchain-based currency with an app store and a social media network. The GC token can be used for purchases in all apps in the Game Changer ecosystem and cashed out back to fiat or crypto, offering an unmatched degree of flexibility to its holders. Game Changer is debunking the classic concept of app-specific currencies that are non-refundable and worthless outside the particular application, a prevalent trend for mobile games today.

By introducing a universal currency that can be used for cross in-app purchases, Game Changer essentially transforms the industry at its core. The traditional monetization methods and the way new products are brought to the app market are replaced with a more natural and productive form of competition that rewards quality.

So far the race has been about who has the biggest budget – especially for marketing. Game Changer is taking care of the marketing of all apps within the ecosystem, as their interests are aligned with those of both the developers and users – if the quality of the products within the ecosystem is not good enough, users will be simply able to cash out their GC tokens back to fiat and spend them elsewhere.

The same goes for every specific app that fails to meet the users expectations, allowing users to switch to a competitor or a different app quickly whenever they want. Especially in the context of mobile games, it has happened multiple times before that the developer’s studio decides to undertake some questionable decisions regarding the development of the game. For example, adding additional content in multiple steps, each of which are only accessible for a separate fee or, even worse, so-called “pay to win” microtransactions that can outright destroy the experience of any faithful player who spent hundreds of hours in the game. Users who have spent money on in-game items and are not willing to play the game anymore have to deal with the fact that all of the in-game currency they have as well as their items cannot be used for anything else. This is one of the factors preventing app users from committing funds and a problem Game Changer can easily solve by giving them that high level of flexibility.

Beyond that, the GC token also creates a whole new world of possibilities for both developers and users to earn real money. With a freely transferable and universal token, every digital asset that can be acquired within any app can be tokenized, essentially giving value to something that would otherwise be not transferable nor useful outside that specific app. Thus, Game Changer enables a concept similar to NFTs (Non-fungible tokens) in its initial version and, with its social network that will be introduced in the later stages of the project development, the facilitation of actual NFTs.

The Game Changer projects taps into two of the industries with the highest growth rate – mobile and entertainment – while utilizing the benefits of the yet to be fully discovered and adopted blockchain technology.

To learn more about Game Changer, their token, its use cases and ongoing funding round with various bonuses for early adopters, visit https://gc-token.com/.