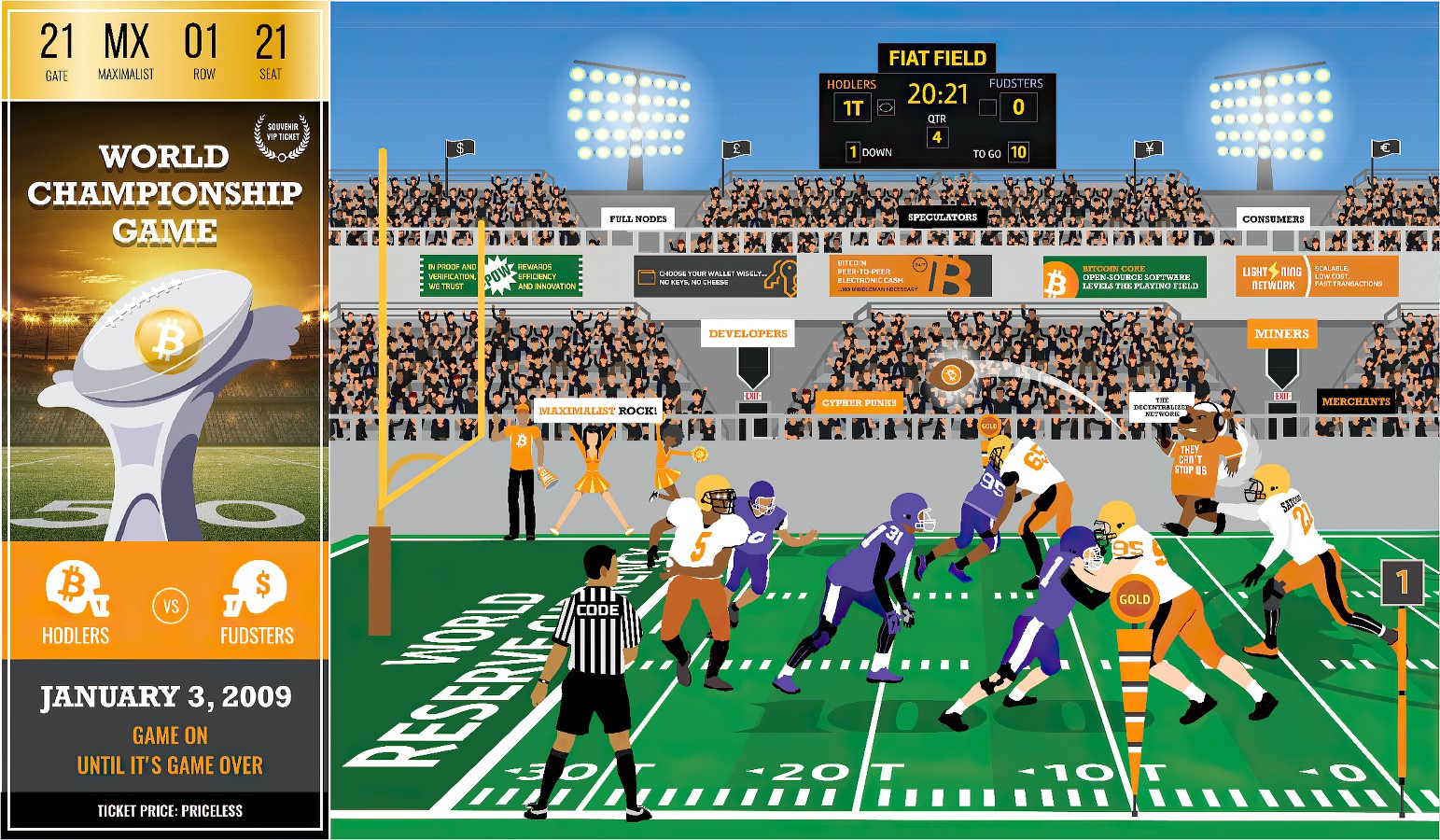 Game On NFT™, a Different Kind of NFT artwork

As a refreshing change from the computer-generated and pixelated abstractions that have come to characterize a lot of NFT art, Game On NFT™ is an artwork creation that dares to be different. It’s a piece that celebrates and tells the story of Bitcoin and recognizes many of those who have contributed to supporting its adoption to make it what it is today, a disruptive technology that’s changing the world.

Game On NFT™ is a digital artwork creation that uses the game of American football as a metaphor to celebrate and graphically illustrate Bitcoin’s path and trajectory towards inevitably becoming a world reserve currency. The artwork features symbolic references to Bitcoin’s inventor, its technology, supporters, detractors, financial environment, present status, and likely destination. Its bright colors and engaging characters help the viewer experience the feeling of actually being in the stadium and part of the action. It is guaranteed to be a lively topic of discussion among all who view it.

Chicago, IL – Denjary Watru, the creator of the Game On NFT™ has dropped an NFT that is sure to become highly sought after by all those who know and understand Bitcoin, its implications for society going forward, and who have an appreciation for the value of digital art. According to Denjary, the inspiration for the Game On NFT™ happened during his routine treadmill workout and while talking on the phone to a friend, attempting to explain Bitcoin.

Surrounded by sports themed pictures on the walls of the exercise area of his home, he had the thought of using a football metaphor to help his friend (who loves football) to better understand Bitcoin. At the end of the call, when the friend said the metaphor had really helped him to get it, Denjary went to his desk and began sketching some of the ideas expressed during the call. Eleven months later, after assembling a team of creatives, the Game On NFT™ was born.

The artwork is titled Game On because it symbolically characterizes the date that Satoshi (Bitcoin’s inventor) introduced Bitcoin to the world as the first provably scarce digital cash, making the concept of a digital asset a reality, as the beginning of a gutsy resolve to provide an exit from the fiat system. The Game On NFT™ tagline is “Its Game On…Until Its Game Over”. The artist incorporates more than twenty-one (21) different elements within the artwork that personify the Bitcoin story and its supporters. Knowledgeable Bitcoin enthusiasts will recognize the symbolism used throughout the piece and appreciate the deep thought that went into each carefully selected image or meme that represents some key attribute of Bitcoin or the network. Since Bitcoin enthusiasts are more than likely to own or have owned Bitcoin for some extended period, they are stakeholders in its success and will find value in an NFT that celebrates the story of Bitcoin (the cryptocurrency that created the digital asset category).

Also, since the Game On NFT™ is an inspired, custom, work of art, it differentiates itself from the crowd of randomized computer-generated groupings of pixelated art, that are presently an overrepresented segment of the NFT art category. Many others in the crypto community will find the Game On NFT™ highly desirable since besides being a piece of custom artwork, it can also be used as an educational tool to help others understand Bitcoin and grow its adoption.

The Game On NFT™ is available on the Opensea platform (https://opensea.io/collection/gameonnft) where prospective owners can choose a one of one seat and row in any of the eight sections, Cypherpunks, Full Nodes, Miners, Developers, Speculators, Maximalist, Merchants, or Consumers.  For more information about Game On NFT™, please visit our website at https://gameonnft.com or email us at [email protected].