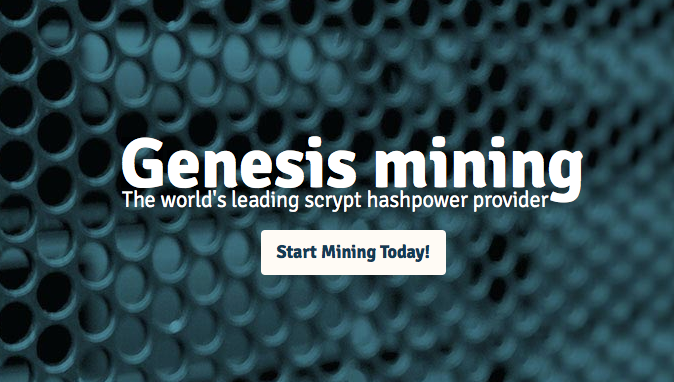 For Bitcoin cloud mining, names quickly come to mind such as Cex.io or PBmining. But what about on the Scrypt side of the spectrum? Genesis Mining plans to change just that.

Before going over what makes Genesis Mining stand out, what are some of the benefits of having your hash power the cloud versus setting up your own rig?

Well, for one, you don’t have to set it up. Even for experienced miners, it’s a hassle to buy parts and assemble the parts; make sure everything is working, etc.

After that, you have to somehow isolate the heat and noise coming from usually multiple graphics cards running at hundred percent load 24/7. If that’s not enough, you still have to pay for electricity, which cuts into your profits.

With Genesis Mining, you pay one low fee of $0.14 per kh/s. That’s it; mining power is then readily available for you to mine. They also offer three contracts, gold, platinum, and diamond.

The gold mining contract is a 2 Mh/s contract that runs for a year and costs $360. This is a great starter package for people new to cryptocurrency, or people that don’t want to mess with complicated mining reads.

The platinum package is a 10 Mh/s contract that runs for year and costs $1600. Genesis Mining touts this as “Best Buy” of the 3 offering more hash power to the gold package and cheaper price compared to the diamond package.

The aforementioned diamond package Genesis Mining describes as “Max Profit”. This one-year contract gives you 50 Mh/s at a price of $7000. This offers the best hash to dollar ratio in the most hash power of the 3.

Speaking of mining, you can mine from of selection of prominent altcoins which you choose the allocation of your hash power and get daily payouts, just like if you had your own rig.

Genesis Mining was kind enough to give me a test account to see for myself how easy it is to use and operate. In the rare case that problems occur, their support is on standby to help you with any of your problems.

Genesis Mining did a really good job with the user interface and allowing people to choose what coin they would like to mine, giving them complete freedom as if they really did own rig. Their clean, intuitive interface should be a hit with newcomers and veterans alike.