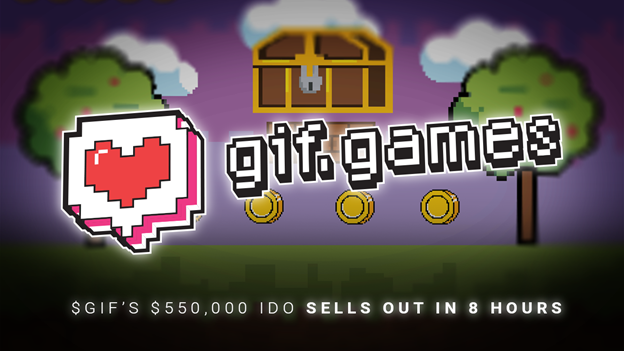 Surging interest in in-game NFTs has picked up following the sharp drop-off from the NFT art mania of early 2021, and in doing so, this new interest has spurred a mammoth $2 billion spend on NFTs during the first three months of 2021 alone. New NFT marketplaces, dApps, and the blockchain solutions that support them have been launching at breakneck speed as thousands of digital collectibles enter the market.

If NFT art was the catalyst for DeFi in the first half of this market’s crypto bull, then NFT gaming is certainly the benefactor of the market’s recent resurgence. For the first time, in-game NFTs are commanding demand and value in not only their respective game environments but the wider market as players can play-to-earn through an endless stream of unique and interesting gaming ecosystems.

Gif.games is an emerging name in the NFT gaming space, buoyed by the fast success of the launch of its first big game, Tezotopia, and recent governance ($GIF) token IDO pre-sale. Taking place at 1400 UTC on Saturday the 28th, 2021, the IDO sold all 20,000,000 $GIF, raising 100,000 Tezos, ($550,000 USD) with 20% of the available $GIF being bought in just the last 60 mins. The $GIF token presale on Rocket Launchpad sold out in only 8 hours and was the first solo-launched project on Tezos from a native launchpad and the first solo-launch to sell out.

Earlier in August Gif.games launched an NFT marketplace and open-world game called Tezotopia with a cryptocurrency called Unobtainium (UNO) that can be used in-game and traded openly on the market. The Tezotopia marketplace launch sold out in only 20 mins, raising an initial $76,514, which was spent on various in-game assets, and resources. The rapid nature in which both launches sold out reinforces the strong pull of the NFT gaming space right now and the wider market’s growing interest in being a part of interesting new gaming ecosystems like that of Tezotopia that can offer users monetary gains as well as a unique experience.

Gif.games has said that it will put 40% of the money raised into LP for $GIF, which will be locked for 1 year. The other 60% of the other funds raised will be used for marketing, game development, and the continued development of the Tezos NFT Ecosystem. Gif.games has stated that it will keep project funding goals to a maximum $300,000 USD to ensure that projects have a good funding pool to work with while also maintaining plenty of room for price growth to attract buyers outside of the IDO.

GIF token is the governance protocol for gif.games and provides numerous benefits such as governance rights for voting on things all Gif.games related, marketplace discounts, a revenue share system, and early access to exclusive new titles and in-game perks.

Governance staking is the first and perhaps most important tier unlocking benefits through a 15-day lock period. This tier really allows for deep involvement with the project’s development as stakers will become a decision influencer of Gif.games ecosystem, having a choice on the outcome of proposals, and game changes through a voting system. 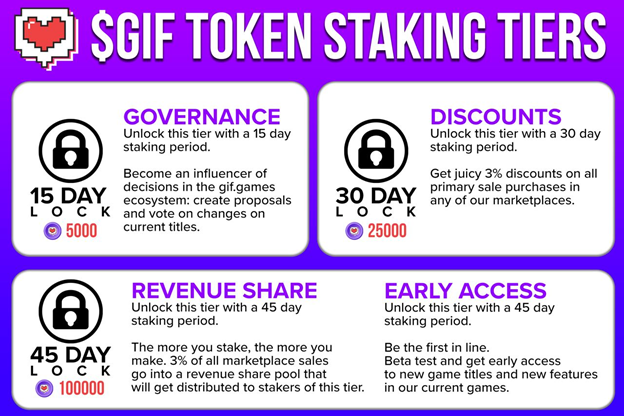 A 30-day lock opens up the discount tier, with a 3% discount on sale purchases for any and all Gif.games items through its gaming ecosystem. Finally, a 45-day lock entitles stakers to a share of 3% from the marketplace sales revenue pool, and early access to Beta testing, new titles, and updates to current games.

Blockchain gaming companies raised $476M in the first half of 2021 as NFTs took the digital art, gaming collectibles, and even the music industry by storm. A single NFT digital art collage fetched $69.3 million in May 2021, a price usually reserved for Van Gogh or Picasso masterpieces. The market peaked two months later and was swiftly followed by a familiar but severe correction. Over the last two months, the market has seen a solid recovery and NFTs are again selling at the same rate they were back in May.

Play-to-earn NFT-based titles like Tezotopia are creating a whole new level of interest in the industry today as the in-game items that previously only held to gaming environments have now transcended the genre entirely. Blockchain technology is providing the launchpad for the NFT space through transparency, with the ability to prove item authenticity, while offering users a way to earn from in-game currencies and unique digital items.

In unison with the Tezotopia market sellout, Gif.games was accepted into the Blockchain Gaming Alliance as a silver member. With the $GIF Rocket Launchpad IDO so successful, Gif.games has secured a listing for its governance token on Tezos’s DEX QuipuSwap so users can now freely trade the token.

Gif.games is now focused on using the IDO funds to bring in more top developers, and artists to expand its rapidly growing gaming universe. The imminent launch of the Tezotopia dApp and attractive benefits of the $GIF staking tiers are just a couple of factors that position Gif.games to become a big name in the space, and with airdrops, incoming artist collaborations, new battle engine beta testing, and whispers of a new game in the works, Tezotopia and Gif.games have well and truly stamped their names on the NFT gaming wave this year.