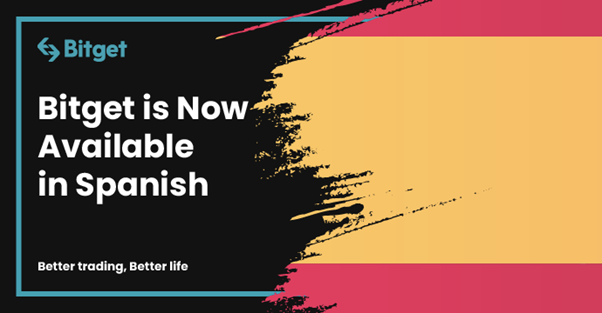 by Bitcoinist
in Press releases
29

Derivatives Exchange Bitget announced on September 16, 2021, that its Spanish version went live to improve the trading experience of Spanish-speaking users who could now switch language from the top right corner of the website. According to the announcement, users are welcome to contact the online customer service for any suggestions, and excellent advice will be rewarded with a trial fund of 5 USDT.

It is reported to be the sixth supported language on Bitget following English, Korean, Japanese, Russian and Chinese. Spanish is one of the official languages of the AU, EU and UN and is spoken by a total of 570 million people across more than 20 countries such as Spain, Mexico, Argentina, Peru and Chile. It is worth noting that Spanish is also the official language of El Salvador, which has made Bitcoin a fiat currency, and Cuba, which passed a bill recognizing cryptocurrencies such as Bitcoin.

According to Bitget CEO Sandra, Bitget’s continuous effort in technology advancement, product upgrades and service improvement has attracted crypto enthusiasts worldwide and received widespread recognition. The Spanish version of the official website will provide convenience to Spanish-speaking users and further enhance Bitget’s global influence and competitiveness within its segment.

Spanish is the second largest language in the world by the number of native speakers, with about 437 million people using it as their native language, second only to Chinese. Considering people who speak Spanish as a second or foreign language, the total Spanish-speaking population reaches 570 million, mainly in Spain and Latin America. The launch of Spanish version will help accelerate Bitget’s expansion into the Latin American cryptocurrency market.

As an exchange that supports trading in English, Korean, Japanese, Russian, Chinese and Spanish, Bitget’s business has covered most countries and regions around the world. For a better user experience, the platform offers 7*24 multilingual online customer service and a Rewards Center dedicated for users, which is also extremely friendly to the new Spanish-speaking users. From it, we can see that it has attached great importance to user experience.

Information shows that Bitget, founded in July 2018, is a leading global crypto derivatives exchange with more than 1.6 million registered users and an average daily trading volume of $5.6 billion, making it the sixth largest derivatives exchange in the world. With the Spanish version and the coming trading competition, Bitget will take more steady steps in global expansion and further enhance its ecosystem.