The Great Ripple Debate: FinCEN Ruling Labels XRP a Currency, Not a Security

The US SEC has decided Bitcoin and Ethereum will not be regulated as securities but the debate continues to rage over Ripple, the third-largest cryptocurrency by market capitalization. Some argue US FinCen has already set a precedent for Ripple’s definition, which will mean the SEC must eventually follow suit.

June has seen the US Securities and Exchange Commission (SEC) make clear that Bitcoin (BTC) and Ethereum (ETH) are not securities and will not be regulated as such. Ripple’s (XRP) classification, however, is still up for debate – or is it?

Some believe a ruling by the US Financial Crimes Enforcement Network (FinCEN) in 2015 sets a definition for the native coin of the Ripple network, XRP, within the US federal government that cannot be superseded by the SEC. As Twitter user Richard Holland (@codetsunami) notes:

In a 2015 civil enforcement by FinCEN, Ripple Labs was accused of violating the Bank Secrecy Act (BSA) by acting as a money services business (MSB) and selling XRP without registering with FinCEN. It also failed to implement and maintain an adequate anti-money laundering (AML) program.

A settlement agreement ensued, criminal charges were resolved, and Ripple was fined $450,000 USD. Critically to the debate, the trading of XRP was permitted:

Through a registered MSB: to implement and maintain an effective AML program: to comply with the Funds Transfer and Funds Travel Rules: to conduct a three-year “look-back” to require suspicious activity reporting for prior suspicious transactions and a requirement for the companies to retain external independent auditors to review their compliance with the BSA every two years up to and including 2020.

Ripple Labs was also asked to make enhancements to the Ripple Protocol to monitor future transactions. Then-US Attorney Melinda Haag, commenting on the settlement, said that she hoped it set an “industry standard” in the digital currency space.

Holland goes on to share part of the introduction and background from the FinCEN ruling he believes is the most critical point:

These are the agreed facts of the settlement where FinCEN agrees with prejudice that XRP is a currency and therefore not a security. This debate is over. pic.twitter.com/QNF7mBil8z

Though not an expert on US law and relatively unknown in the Twitter-sphere Holland is an entrepreneur and the creator of an open source XRP wallet. He says:

They have already bound the US Fed Government into a position where $XRP is a currency according to the agreed facts of the settlement. Something can’t be both a currency and a security. Subject matter jurisdiction of the agency doesn’t affect its ability to bind the whole govt.

Not everyone in the cryptocurrency community agrees that FinCEN has set the bar for XRP but the argument is certainly fuelling the debate, and no one can deny that precedent is an important factor in law and regulation.

Proponents of Ripple argue that XRP does not meet the definition of a security: 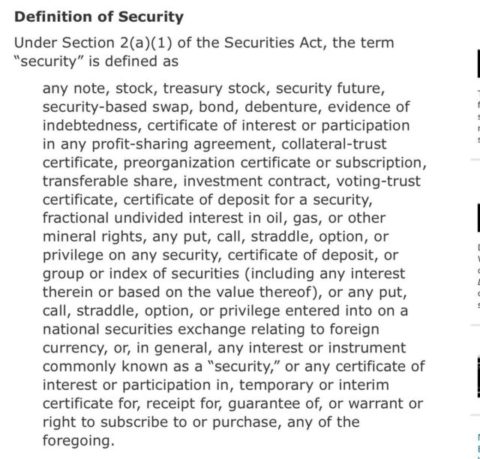 Ripple Labs has worked hard to portray XRP as a digital currency rather than a security. Brad Garlinghouse, Ripple CEO, recently told CNBC:

Whether or not XRP is a security shall not be dictated by one lawsuit. The SEC is the governor of that. I think it is very clear that XRP is not a security. It exists independently of Ripple the company. If Ripple, the company shut down tomorrow, XRP will continue to exist.

Cory Johnson, Ripple’s chief market strategist, declared Ripple absolutely “not a security” and that Ripple does not meet the standards for what a security is based on the history of court law.

Is Ripple (XRP) a security or not? Will the FinCEN’s 2015 ruling make a difference to the SEC’s final decision? Let us know in the comments below.