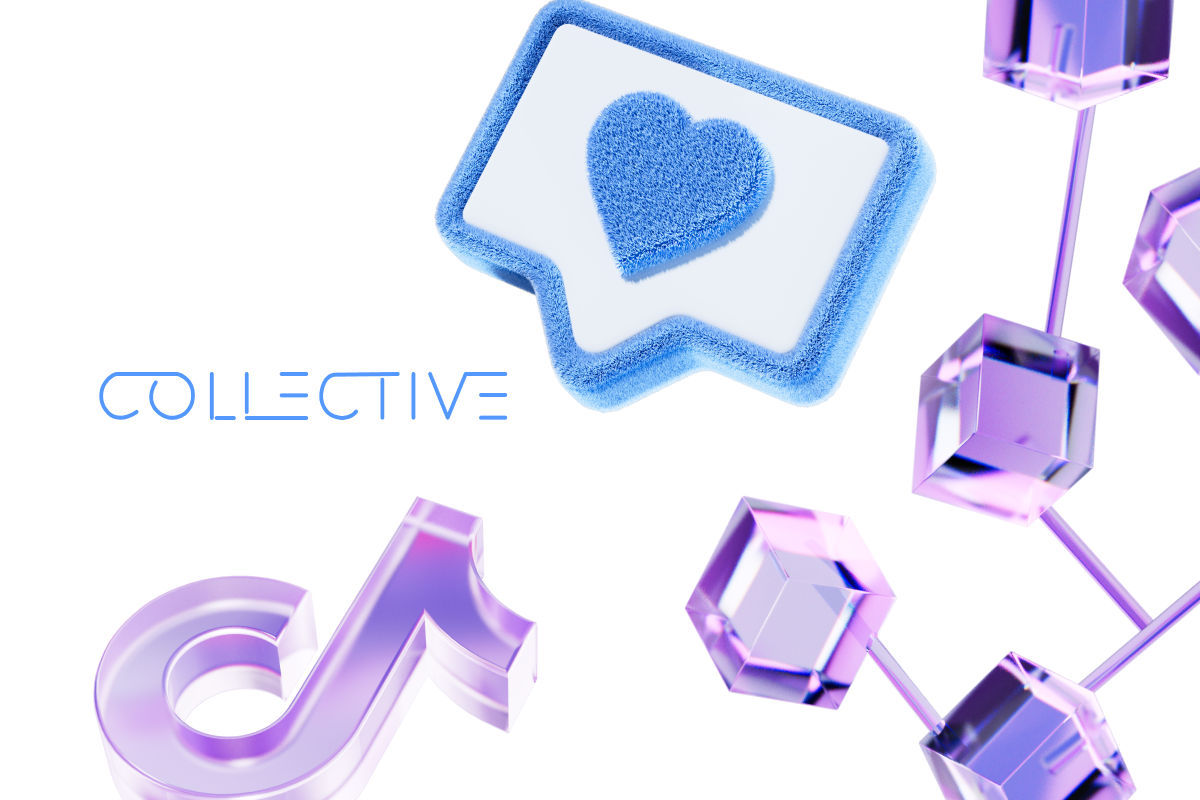 Content creators depend on intermediary platforms to showcase and monetize their content. However, there are just a handful of platforms that dominate the market, controlling the public discourse and monopolizing profits from others’ creations. An unfair and outdated system that is about to be disrupted by nascent Web3 and decentralized social media. Collective is one of those projects.

Centralized platforms like YouTube, Instagram or TikTok, have set up revenue systems that no longer have creators at their core. Statistics show that YouTube had $63.6 billion in advertising revenue alone in the last three years, but they only paid creators around $30 billion in that same period of time, according to Fortune. A huge gap of more than $30 billion in profits with products made by users themselves, of which they aren’t paid fairly. Furthermore, the YouTube algorithm doesn’t help new creators get noticed either, as only 9% out of 2 million users made $50k YoY.

“These problems stem from the fact that the data users leave behind and the content they create is not theirs and is not in the public domain. It is owned by the companies. Since only a handful of companies have access to content, only they can curate channels and create competitive features and applications. We are stuck in a vicious circle: users are forced to use these companies’ apps because they have a monopoly on content. Because of that, creators are forced to keep providing them with their content in order to get the reach that keeps empowering these companies at the expense of creators and society as a whole,” said Bradley Peak, CEO & Founder of Collective decentralized social media, an influencer himself with over 200,000 followers and successful investor in the space.

YouTube is just one example of a system that doesn’t work anymore for either its users, creators, and brands. In fact, a recent report by Deloitte showed there is a paradigm shift as creators are looking at new ways to monetize their content, taking back ownership of their products, and finding new ways to engage with the community.

The same report states that on average, creators report that more than 50% of their revenue comes from brand partnerships, rather than platform revenue, in a way to diversify their revenue streams. What’s more, 1 in 2 creators believes Web3-powered technologies like NFTs, Metaverse and Blockchain are at least “relevant” to their business and they see them as a tool not only for revenue but as a utility for:

As creators, users and businesses grow weary of these centralized platforms, new models are actually being developed. Models that aim to help evolve the creator economy towards a fairer system. Using Web3, blockchain and gamification, new developers are building platforms based on decentralization.

There are some examples of new platforms that are set up in a decentralized model, putting creators, businesses and users at the forefront of their development. One of those is Collective, a UK-based content-driven next-generation social network that aims to support digital content creators through innovative revenue systems based on a referral program, fractional content ownership, and using different gamification tools to empower both creators, users and businesses. The idea, overall, is to promote a decentralized system that allows creators to own their creations while leveraging the now-lost dialogue between the community and the author.

The basics of Collective are that of a Web3-powered decentralized platform where media is shared directly between users and stored in various locations. This provides stability afforded by not being dependent on a central server (with no single point of failure), and basically means that data cannot be easily hacked, manipulated, or lost, so access to the information will not be disrupted.

A decentralized system automatically gives authors more control over their creations and, along with other tech-based innovations like NFTs and blockchain-based economic systems like tokenomics, they retain full ownership of their creations. After that, they can monetize and share their content however they see fit, taking advantage of a freedom no longer available on today’s platforms.

The platform has taken a well-known term in the investment market and adapted it to their platform: Fractional ownership.

Basically, fractional ownership is a percentage ownership in an asset. Fractional ownership shares in the asset are sold to individual shareholders who share the benefits of the asset such as usage rights, income sharing, priority access, and reduced rates. In the Collective platform, authors and creators can put up-for-sale copyrights to their content to producers to promote content and earn $COL (the platform’s own token), while, at the same time, producers who own copyrights will receive a proportional income from this content.

In turn, this means that content creators will no longer be stuck with the old ad-based revenue system of legacy social media platforms. Something that at Collective they have thought through. In fact, they have developed what they called the new generation of ads. Users will see ads based on performance only instead of targeting personal data biases. This is built on their gamification concept: users will be encouraged to own more rating points as those who hold more of these will be shown as ads to new users. A complete overhaul of the old legacy ad-system.

Back to its roots: How Collective empowers the conversation between creators and users

Another issue in current platforms is that the conversation between creators and their community has been undermined by the “algorithm rule”. This means that, while the conversation exists, the end goal is about watching time and biased statistics, not true and growing community building.  Suffices it to say that the ‘Like’ button is still one of the greatest forms of feedback on social media. With just a click, a new conversation between users and creators is born.

The simplicity of the idea is improved at the Collective platform with two new types of likes: Business Likes and Collective Likes. In both cases and depending on the subscription, businesses and users receive rewards for each like their content receives. Each Super like on the post rewards the author with a certain amount of $COL. This is direct communication between users and creators, and, in turn, gives authors more opportunities and funds to promote their content both within and outside the platform.

Other ways that users can support their favourite creators are through Rating Points and a Referral System.

According to Collective: “Every user has their own rating points on the platform that is shown in the user profile page. Users with a large number of rating points will more often get into the system promotion of the account for new users. You can get rating points both for activity on your profile and directly by burning the $COL token. The formula for the chance of getting promoted by RP for new users on a particular day.”

Likewise, their Referral System, which is based on an affiliate model, allows their creators and users to earn additional income by bringing in new users.

All these rewards vary on the type of subscription. One of the trends in the content creators economy is to provide more customization and tools at disposal without losing the ability to enjoy a platform for free. Users are aware now of big platforms collecting and selling their data in undercover freemium models.

To avoid that, Collective has set up a tier-based subscription model for users. There still is a free subscription, where any registered user can view the free feed, correspond and subscribe and all the lot. From there there is:

With no editorial authority, users are free to post anything of their will without fear of restriction or intervention by third parties. Since data is not centrally held, it is generally considered impossible for governments/authorities or anyone else to censor or remove any posts.

That doesn’t mean that there isn’t any moderation system in place. Using gamification techniques and peer-to-peer moderation, users will be able to moderate what content is put on the platform and get rewards for such action. Achievement points will be earned by users depending on the amount of posts they moderated as well as users will randomly receive daily tasks with post moderation. Such functionality helps the ecosystem work collectively in order to achieve a safe place everyone can use and earn in.

The content creator economy as we know it today was born out of community engagement through online social networks. It started as a conversation between the creator and its community, a feedback loop that benefited everyone (at least in paper) by creating value for both parties and leveraging the exchange of ideas. Meanwhile, online social networks provided a perfect platform to set up their digital personas, find new audiences and monetize their content through user-friendly platforms. That was the idea in the beginning. The reality, nonetheless, has become quite different.

As this model doesn’t work anymore, platforms like Collective, which use new technologies, are needed. They change the paradigm of how users, content creators, influencers and the company itself interact with each other. This conversation is about the future, a future that belongs to decentralized media that respects and loves everyone who uses it.

“We believe that all of these problems can be solved by decentralizing social media in the same way that Bitcoin and Ethereum decentralize the financial system. In particular, Bitcoin has created a way to store transactions in a public registry that no single entity can monopolize, which has led to the destruction of the financial industry. This technology can now, for the first time, be extended to run a social network without having to rely on centralized services. Bitcoin and Ethereum have shown that dominant platforms can be built around open source and open data rather than private companies monopolizing user data and profiting shareholders at the expense of everyone else,” mentioned Bradley Peak, CEO & Founder of Collective.