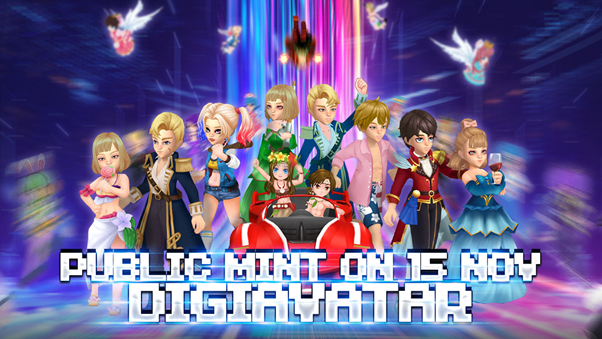 How do you make the intangible feel tangible; the digital seem physical? How do you add authenticity to a space whose very essence is nothing more than a judicious arrangement of ones and zeros? It’s a challenge that’s kept some of the industry’s brightest minds – from Facebook to blockchain heavyweights – awake at night burning the midnight oil. For the vision of a persistent, decentralized, and playable virtual world to become a reality, there needs to be more than merely fetching avatars and nifty NFTs.

Billions of dollars are being thrown at making the ‘metaverse’ more than just a meme, with the latest startup to enter the fray known as DigiNation. Many of the features it offers will be familiar to fledgling metaverse participants, including gaming and player-owned assets. But DigiNation has the potential to be much more than just another entrant to what’s becoming one of the most crowded crypto verticals this quarter. If its team plays their cards right, there is the potential for the project to become the very backbone upon which much of the metaverse is anchored.

It’s impossible to assess the health of the burgeoning metaverse ecosystem without revisiting the NFT mania that took the cryptosphere by storm this year. Over the course of the summer, projects such as BAYC, Artblocks Curated, and CryptoPunks showed that non-fungible tokens are much more than a flash in the pan and that the communities who coalesce around a nascent project can propel it further than anyone could have imagined.

While NFT mania has since subsided, the concepts it advanced – digital ownership, strong communities, grassroots promotion, and virtual spaces – have fed into the metaverse movement that is now hitting its stride. The core products that will launch with DigiNation are directly built upon the revolution NFTs kick-started. These include tools like NFTLive, a means of animating blue chips like CryptoPunks, allowing them to transcend the boundaries of JPEGs and become fully animated avatars.

Speaking of avatars, DigiAvatar is the project’s identity solution that will grant users access to the DigiNation metaverse. Initially, these will take the form of 1024 genesis NFTs that serve as access keys to the digital realm that is being constructed. ‘Mint’ and ‘Angel Mint’ options are available until November 15, with the latter reserved for participants who take an active role in the project’s Discord and other social channels.

This feature also plays into a trend that the summer’s enduring NFT experiment has popularized: the notion that users who actively contribute the most deserve the greatest rewards for their endeavors.

Gamify All the Things

Exploration. Participation. Ownership. Gamification. These are the core tenets in which the metaverse movement is enshrined. Crypto Survivor is the title of the game component of DigiNation and it promises to provide a taste of the immersive experience that lies in store. Drawing its cues from viral TV shows such as Survivor and Squid Game, Crypto Survivor will give NFT holders the chance to joust it out for bragging rights and the lion’s share of the spoils.

In its mission statement, DigiNation describes the three cornerstones that will anchor its roadmap:

These are early days for the metaverse movement, and earlier still for DigiNation, whose grand vision will take time to fully materialize. Nevertheless, all signs suggest that what started out as an amorphous web3 concept is becoming fully fleshed, with fine detail to fill in the broad brushstrokes. Fast forward six months and the metaverse will feel very real indeed.