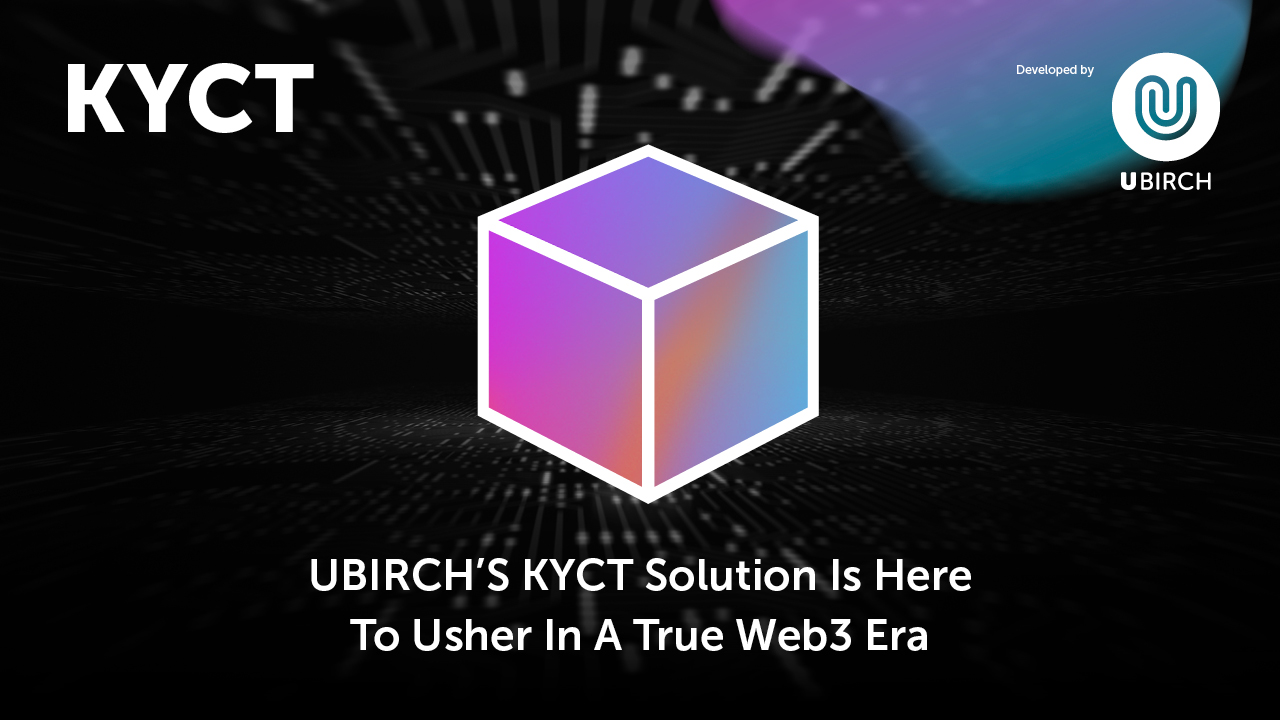 How does KYC-Token solve the biggest problem of Web3?

The crypto, blockchain and NFT sector is booming despite the ongoing bear market, but this doesn’t mean that this space is free from undesirable actors and fraudulent entities. In fact, just this year alone, investors have lost more than $3 billion in crypto to hackers across 125 hacks. Clearly, there is a desperate need for tighter security measures and proper regulation because this industry cannot survive long-term otherwise. Of course, a viable project would also need to maintain the high-quality of its services and features to consistently attract investment. 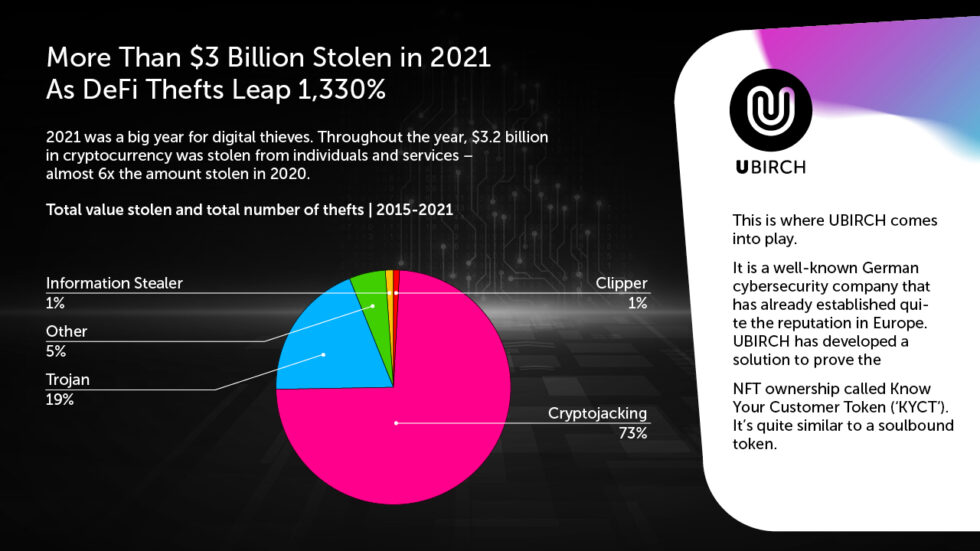 This is where UBIRCH comes into play. It is a well-known German cybersecurity company that has already established quite the reputation in Europe. UBIRCH has developed a solution to prove the NFT ownership called Know Your Customer Token (‘KYCT’). It’s quite similar to a soulbound token.

KYCT, or Know Your Customer Token, can be utilized to recognize and confirm the ownership of cryptocurrency wallet holders, as well as the origin of assets minted with specific wallets. The solution will hence address key industry issues such as proof of asset creators’ identity and asset origin by establishing a link between an author’s civic ID and a Web3 ID. The solution is additionally EVM-based, multi-chain, and fully compatible with all leading digital IDs. Moreover, clients receive the services directly via API.

KYCT aims to be more than just another by the numbers initiative, as instead it is a vital component of the UBIRCH cybersecurity solution, which is built on the UBIRCH Trust Platform and has been successfully implemented and continues to support multiple strategic industries in both German and EU markets including but not limited to Energy, Healthcare, Insurance, and Industrial IoT since 2014.

KYCT is a non-transferable NFT, incorporated as an ERC721 token. As a result, KYCT is a ‘verifiable ID token’. As a trusted source to identify our users we have a collaboration with  leading Identity-Providers like IDnow. The KYC-Token also retains the idea of ‘Soul-Bound Token’, as previously mentioned.

Furthermore, KYCT is chain-agnostic, which means that it works on any Ethereum Virtual Machine based solution and wallet, allowing a single identity proof to be used across multiple chains. Besides that, this verifiable proof of identity is verified on the UBIRCH Multi-Chain Backend, which also serves the German state projects and various other enterprise players for similar purposes.

KYCT also has a solid foundation and identity storage. In fact, it is the only solution on the market that includes both identity proof and a reliable mechanism for revealing an actual identity in the event of a dispute. This addresses the issue that platforms often face when attempting to ensure safe transactions while also protecting their users’ identities. 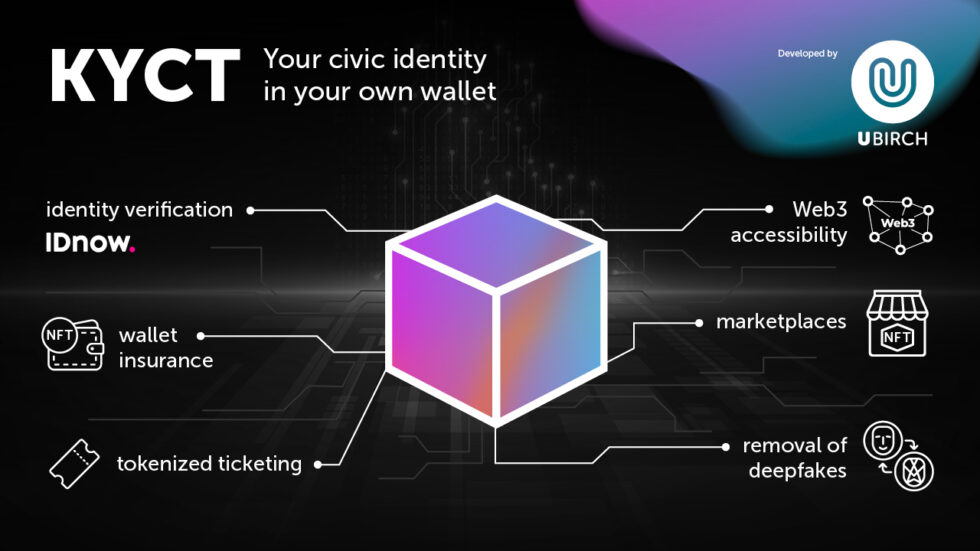 Why does the industry need it?

Even today, the industry is poorly regulated and events like this year’s Terra (LUNA) disaster and the Binance and FTX fiasco have only made matters worse. Moreover, there is no single method for proving ownership of digital assets. There have been a number of cases where assets have been stolen from their owners and sold on behalf of fake profiles.

As NFT implementation lagged far behind the artistic component of the burgeoning sector, and a token is now a proof of many types of asset ownership in Web3 space, the question of regulation or, at the very least, a single standard is looming.

Each platform is therefore attempting to solve the problem in the best way possible. For example, marketplaces are attempting to implement their own solutions, such as manually verifying asset ownership or involving AI.

However, because they are not cross-platform, they are not truly Web3. They’re also quite complicated, expensive, and thus only cover a small number of users. In addition, the number of NFTs minted is decreasing, but the ownership period is increasing, indicating a more serious approach to what a user purchases.

Through the solution, UBIRCH will significantly increase the level of trust by combining crypto identity and civic identity verification in a single token that is kept directly in the crypto wallet. This includes well-established processes like identity verification via IDNow, which are effectively combined with cryptographic security and Web3 decentralization.

KYCT future plans include wallet insurance and value-added services, tokenized ticketing, and passwordless single sign-on/login processes. There is also the integration of marketplaces and the contribution to the removal of deepfakes.

Creating KYCT is also a simple and straightforward process, and the company’s Medium page has provided an easy-to-follow guide on this too.

Overall, this is only the beginning for UBIRCH and the sky could well and truly be the limit for what KYCT can accomplish in the long run not just for individual users, but also for the wider NFT and blockchain sector as a whole while contributing to the arrival of a true Web3 era.