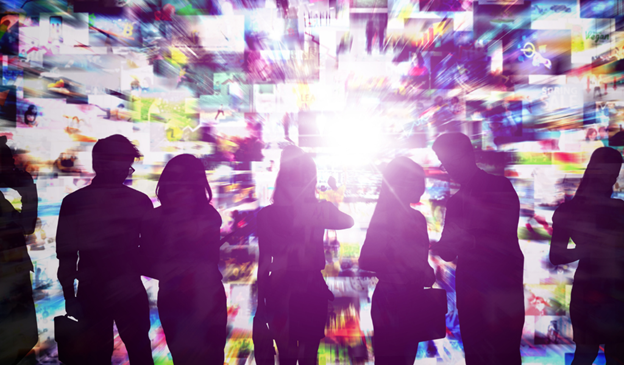 How The Metaverse Can Shape The Future Of Sports Viewing

Metaverse advocates say the coming revolution of virtual worlds will change the way people consume sport and raise the bar in terms of fan engagement to unprecedented levels.

Imagine, if you will, stepping foot into a metaverse-based sports arena, where all the other fans present are wearing their own avatars. They’ll use their own voice prints as a means of identification to unlock the magic that only virtual worlds can offer.

It’s a world of sports where fans can create their very own avatar, decked out in the colors of their team. They’ll be able to equip themselves with digital sports equipment, socialize with other fans and the fans of rival teams, train, work and discuss tactics, play games, bet on the outcomes and more besides.

The metaverse will create a sports experience that’s a world apart from today’s remote TV viewers who remain stuck firmly on their sofas. It will be a totally immersive existence that allows fans to participate more fully and engage with their favorite players in ways that weren’t possible in the past. It could also have a fundamental impact on sports training, and give sports clubs new ways to monetize their digital property.

The potential use cases of the metaverse in sports are numerous, but few are more enticing than the prospect of remote viewing. Fans will be able to penetrate an immersive, 3D virtual replica of their team’s sports arena, where they’re represented by a unique digital avatar that showcases their passion for a specific team or player, or both.

The metaverse will ensure geographical barriers melt away into the background, allowing fans from all over the world to come together in their enjoyment of the action before, during and after the events.

For example, fans could potentially meet their favorite football players or the team coach and pose for pictures with them, or attend a virtual bar where they can discuss the game with other fans. During the actual games, they will be able to enjoy an incredible panoramic view of the action, with the opportunity to zoom in to gain the most suitable perspective. It’ll be a more absorbing experience with far greater detail than is possible through traditional TV or even in-person attendance. This will be enhanced by multi-view cameras that make it possible to step onto a virtual pitch so the viewer feels as if they’re right in the middle of the action. They can join in with the cheerleaders, sit with the coach in the dugout, or simply watch from afar with a group of friends.

It might sound like a faraway, futuristic scenario, but virtual stadiums are already a thing. Not long ago, the professional eSports organization Made in Brazil launched its first eSports stadium in the metaverse. Called the MIBR Arena, it provides an exclusive experience for fans of eSports.

The stadium was built in partnership with the metaverse infrastructure firm Everyrealm, and is designed to create opportunities for fans and players to interact and converse with one another. The MIBR Arena is modeled after a physical sports arena and located within a metaverse city that’s inspired by Rio de Janeiro, where MIBR is based. Visitors can experience all of the famous sights of Rio, including the Copacabana promenade, Christ the Redeemer and the statue of Jesus Christ at the Summit of Mount Corcovado. Within the stadium, there’s a VIP area where people can come together to interact.

“Thanks to Everyrealm’s partnership with MIBR, esports fans now have a place to call their own,” said Everyrealm CEO Janine Yorio.

A similar experience is promised for soccer fans by the Web3 company TopGoal, which recently partnered with Binance to extend the use case of that platform’s Fan Tokens. TopGoal’s ultimate plan is to build an entire football metaverse that will host numerous virtual stadiums where fans can come together to watch matches, buy metaverse products and collectibles, play games and more.

For digital rights holders, a metaverse-based sports arena will create new opportunities for monetization that are linked to enhanced fan experiences.

One exciting area of innovation is non-fungible tokens, which can enable all kinds of possibilities within the metaverse, acting as virtual tickets to matches, representing unique collectibles, videos and more. This concept of being able to “own” digital items will become a fresh source of income and engagement and it’s an area that’s already being explored by many big names in sports.

For instance, fans could purchase an NFT that gives them the right to watch a game from a luxury virtual VIP box. The advantage of the metaverse is that there will be no restrictions on availability or capacity like there is in the real world. In addition, clubs can sell digital souvenirs, including kits and apparel for specific games and players.

Again, this is not just a possibility. NFTs in sport are already a thing. One of the football world’s top players, Cristiano Ronaldo, recently partnered with Binance to launch his first official NFT collection. The NFTs allow fans of the Portugal and Manchester United legend to own a small piece of history – such as a video of one of his goals – and the chance to win additional perks.

Also being explored in the metaverse is gamification around sports. Maincard, for instance, is reimagining the idea of gambling with its unique NFT-based sports prediction game. Rather than betting with cash, users can buy a NFT that enables them to start guessing the outcome of football, MMA, e-sports and other contests. If they guess correct they can earn both cash prizes and also much rarer NFTs that can be used to wager with other players, collected or sold for a profit.

Binance is getting in on the act too with its Football Fever contest, which was launched to coincide with the FIFA 2022 World Cup. Fans can sign up with Binance for a free NFT passport and then predict the results of each day’s matches, throughout the duration of the tournament. Those who correctly guess the results can win cash prizes of up to $1,000 daily. Although experimental, the initiative has been hugely successful, with more than 150,000 NFT passports claimed and almost 30,000 new users signing up to Binance to be able to participate in the game.

The above examples are really just a taste of the possibilities for metaverse gamification. In future, football clubs could stage quizzes, contests or mini-games during half time, giving their fans a chance to earn rewards for their support.

We’re still in the very early days of the metaverse and everything we’ve seen so far is really just the tip of the iceberg in terms of what it could mean for sports. Technologies like cryptocurrency and NFTs are still extremely nascent yet they’ve already proven to be incredibly popular. As people become more familiar and comfortable with the metaverse, digital attendance of sporting events will become far more commonplace, with extras like social events, autograph signings and meets and greets just some of the benefits that will likely become standard.

The metaverse is still being built but already there have been instances where people have handed over millions of dollars to acquire virtual land within it. What’s more, humanity has seemingly embraced the concept of doing things by remote. Millions of people all over the world now work, study and socialize online every single day. Given the incredible popularity of sports and the hunger for fans to witness the action, it’s likely only a matter of time before virtual attendance at major sporting events becomes the norm.