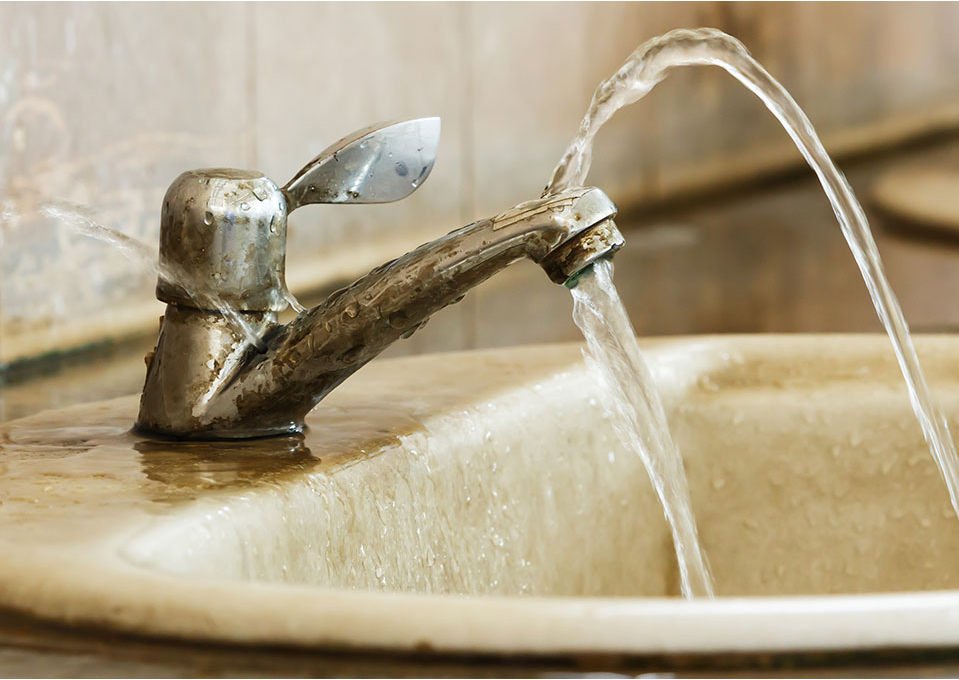 Huobi Token (HT) appears to be in a vulnerable state as it continues to deal with the drama that is happening within the Huobi cryptocurrency exchange.

While the crypto hiked its trading price by 3.2% during the last 24 hours to trade at $4.72 at the time of this writing according to tracking from Coingecko, the digital asset continues to struggle to regain some of its recent looses.

Over the previous seven and 14 days, HT has squandered 6.4% and 11.3% of its value, respectively, and is on the verge of another meltdown as suggested by some of its technical indicators.

The altcoin ended up being in an oversold position, making it more susceptible to a significant price decline which might come within the next few days.

DeFiLlama, a decentralized finance data aggregator, recently shared on Twitter that Huobi exchange experienced a massive capital outflow in the last 24 hours to the tune of over $75 million.

The information provider noted that back in December 15, 2022 the company enjoyed a capital inflow of more than $87 million. 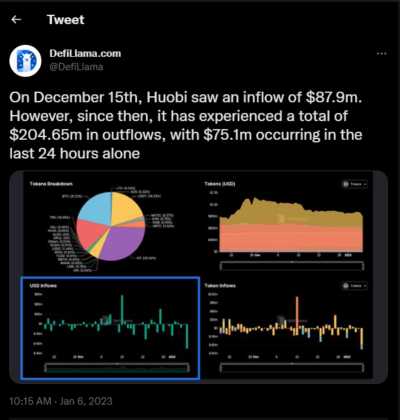 The exchange, however, failed to sustain this kind of performance and it ended up losing over $204 million, including the $75 million that was recorded during the previous 24 hours.

One potential reason for this notable decline that undoubtedly has affected Huobi Token is the fact that there are rumors spreading about the company struggling with its financial operations.

For one, there were unconfirmed reports that some executives of the firm were forcing a number of its employees to be compensated in cryptocurrencies.

Related Reading: These 5 ‘Lesser Known’ Crypto Made Headlines In The 1st Week Of January

Moreover, Reuters reported that Huobi will slash 20% of its employees. According to the statement of company director and TRON founder Justin Sun, the company is undergoing structural adjustments.

After a difficult 2022, during which several large enterprises went belly up and the value of tokens like bitcoin plummeted, Huobi is the third major crypto company in as many days to announce a cut in headcount.

On Thursday, Silvergate, a cryptocurrency-focused U.S. bank, announced it will lay off around 40% of its personnel, while digital asset lender Genesis disclosed it would fire 30%. 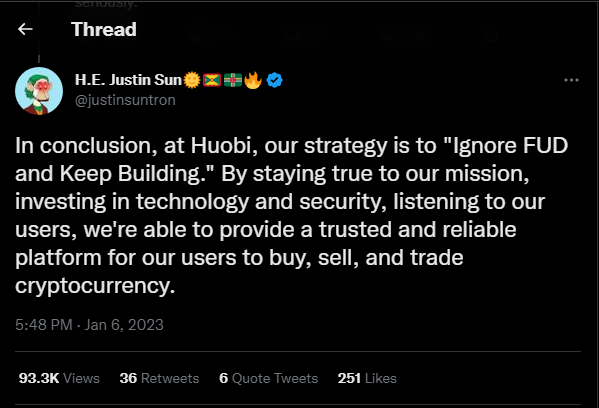 In addressing the aforementioned matter, Sun – who only became part of Huobi last year – cited the volatility and uncertainty that the crypto space is known for.

“It’s important to recognize that the world of crypto can be volatile and uncertain at times. There will always be ups and downs, and it’s easy to get caught up in the fear, uncertainty, and doubt (FUD) that can come with it.”

Sun also added that the company is doing its best to not let these “distractions” hinder it from attending to the needs and demands of its users.