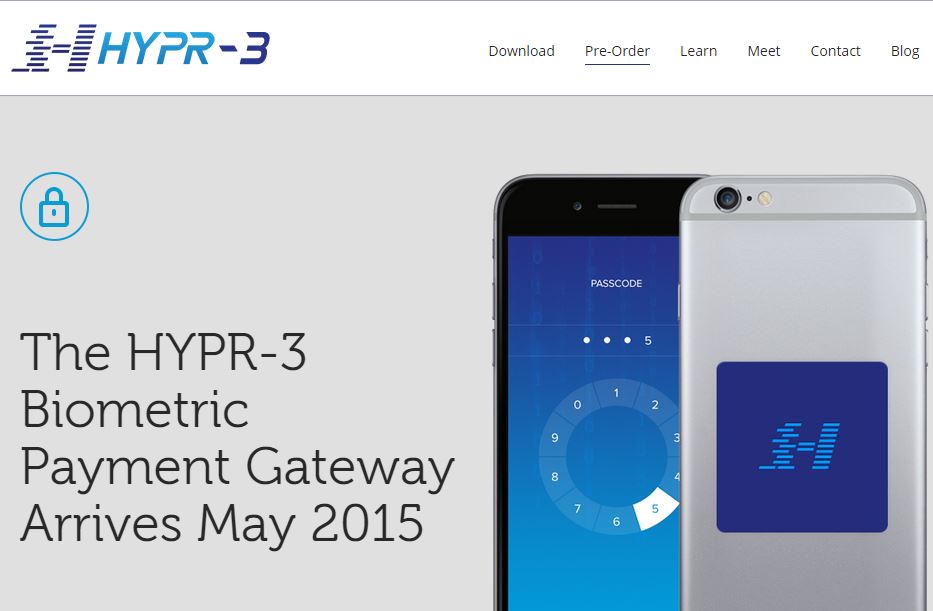 HYPR-3 is a consumer product solution for extra high security with three-factor authentication that will be arriving by May 2015. This system allows users to authorize mobile payments with their fingerprint by swiping an adhesive biometric token generator approximately the size of a nicotine patch. Attaching the HYPR-3 Sticker to a Bluetooth enabled device replaces passwords with 3 Factor Authentication.
The three-factor authentication is described has a process by which users can enhance their security by applying a 3rd factor with the user finger print:
Something I have, Something I am, and Something I know. The HYPR-3 protocol prevents identity theft caused by malware and hackers by replacing standard payment authentication with a fingerprint swipe. Such a level of consumer protection enables HYPR-3 users to spend Bitcoin without ever owning Bitcoin. This solution will usher in a new era of digital commerce where fraud and identity theft are things of the past.

In the rising world of digital currency, 2 Factor Authentication is no longer a secure protocol. The Company is using the Blockchain to secure the users identity while stopping hackers in an entirely new way. The team wants to eradicate identity theft and fraud from all digital wallet platforms. The HYPR-3 Protocol will be open to all FIDO certified 3rd party payment platforms. Our biometric authentication gateway can eliminate fraud.
The payments industry is patiently waiting for the “killer app” that will make Bitcoin a mainstream payment method. We’ll just come out and say it: the killer app is not just an app. The world is missing a fraud elimination protocol. By removing cyber fraud from the equation, our biometric authentication gateway allows consumers to finally spend bitcoin without ever owning bitcoin.

HYPR Corp is a team of minds in New York City who want to make Bitcoin easy and safe for the average consumer. We believe that bitcoin is the future of digital money. The team believes people should be able to spend bitcoin without ever owning bitcoin, and without knowing what it is. The team believes that before considering taking bitcoin mainstream, it is extremely necessary to solve the fundamental problem preventing consumer adoption, which is cyber fraud.

The HYPR-3 team presents a biometric gateway as a solution.
The solution is a 3 Factor Authentication protocol. HYPR-3 enables users to authorize payments with their fingerprint. This is done with an adhesive biometric token generator approximately the size of a nicotine patch. Simply peel and stick the HYPR-3 to any Bluetooth enabled device and standard authentication is replaced with 3 Factors:
Something I am: My Biometric Data

Something I have: My HYPR-3 Sticker

Something I know: My Numeric PIN

3 Factor Authentication is a protocol that, when designed and used properly, provides mobile device users with the highest level of security and privacy appropriate for consumers. In the growing world of digital currencies, 2 Factor Authentication is no longer a secure protocol. The mobile devices we formerly used to authenticate our desktop transactions are no longer considered a secure second factor. Unless identity theft and fraud are successfully deflected, mCommerce solutions will remain hindered by chargebacks, interchange fees, and the subsequent lack of user adoption.
Consumers are slow to adopt the currency as a payment method due to these issues of complexity, security, and volatility. Merchants have gone as far as offering 10 percent discounts to entice buyers to pay with bitcoin. This is easy for merchants, since merchant-side services like Coinbase and BitPay auto-convert bitcoin into USD, shielding merchants from bitcoin price volatility plus the inconvenience of familiarizing themselves with how to use the Bitcoin protocol responsibly.

The HYPR-3 relied on the fact that merchants can receive bitcoin without keeping bitcoin, so then the team assumed that consumers should also be able to spend bitcoin without ever owning bitcoin. The team tried to introduce this feature through a function called DebitCoin; in this case, buyers can spend bitcoin by having their debit card charged in real-time. So this is set to attract a large number of new users because the HYPR-3 biometric gateway allows consumers to use their beloved plastic cards and take advantage of the discounts being offered by merchants without having any idea how Bitcoin works. People will be able to use bitcoin without even know how does it work. 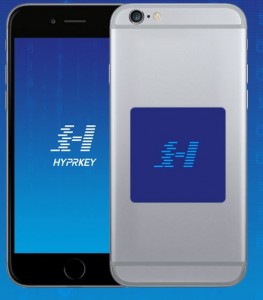 A 3 Factor Authentication protocol eliminates the threat of cyber fraud and identity theft. Unlike other biometric scanners, the HYPR-3 swipe sensor requires an actual human finger to wake up the sensor. This feature makes it almost impossible to spoof the device. In order to succeed at wrongdoing, a hacker would require physical access to the user phone, access to the user HYPR-3, knowledge of the user PIN, and control of the user finger.

With the increase of hacking threats in the web, solutions like the ones presented by this team will be popping up as the industry flourishes. However HYPR-3 comes to be the first wallet system offering enhanced security based on biometric data. HYPR-3 comes to forfeit the problem of security, enabling biometric security for any payment method.
The HYPR-3 Biometric Payment Gateway is set to launch next May 2015, but interested users will be able to start ordering in the Pre-Orders period beginning in January next year.