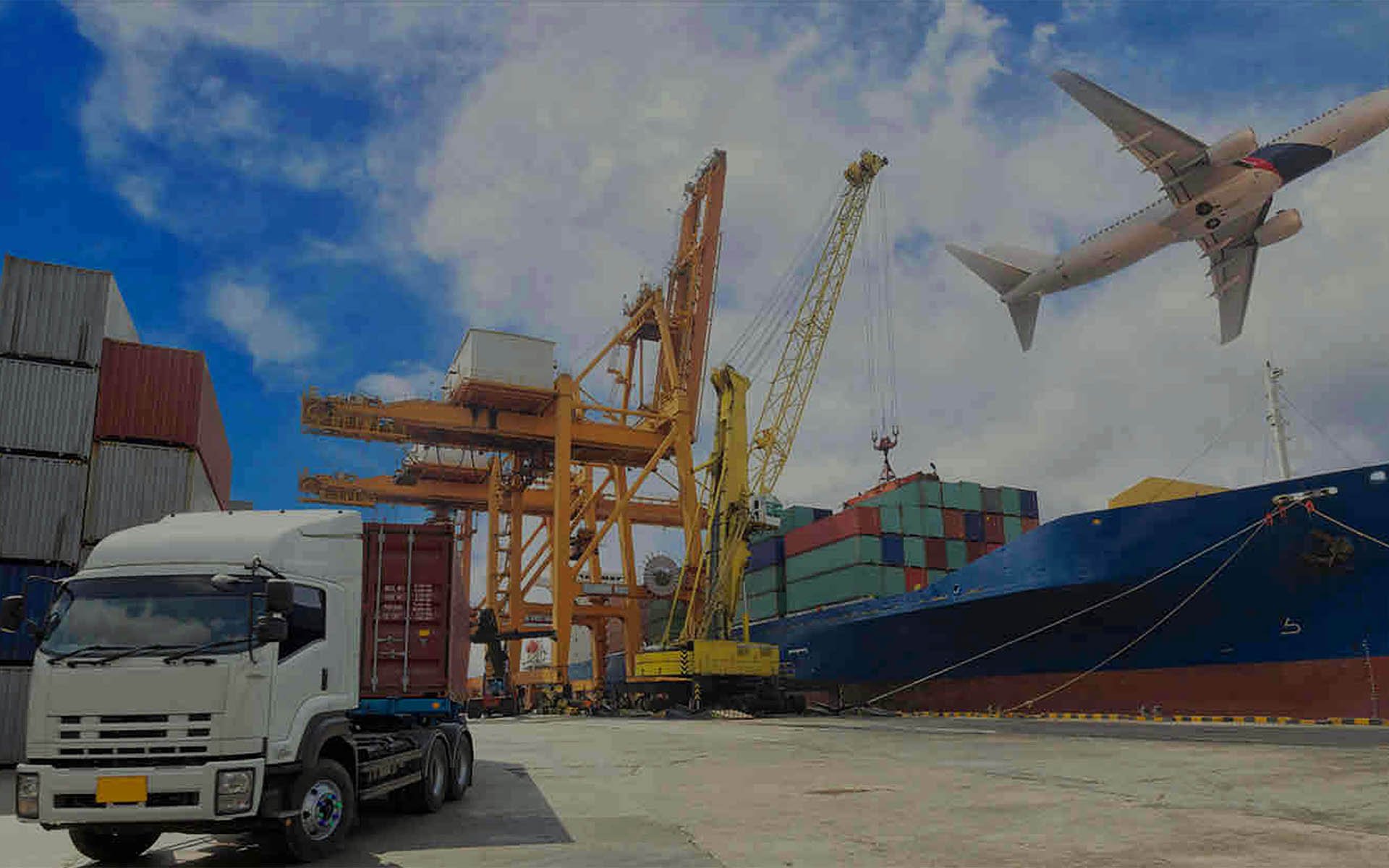 IMMLA presented Proof of Concept and the previously announced pre-alpha version of the platform.

“We have deployed a blockchain on the basis of which the IMMLA system will operate later. For now, the Proof of Concept functionality already includes the ability to place offers and to process them. The work of the IMMLA blockchain can be observed by the use of monitoring of the private network,” said CIO IMMLA Viacheslav Neunyvakin.

The pre-alpha version includes the basic functionality of the IMMLA cargo owner, which will be available for use in the I quarter of 2018. In the future, modules will be added to it, intended for the inclusion of other participants in the logistics network.

Work with the platform starts from the login page. Each participant of the system enters his own login and password received during registration.

The application’s interface includes a standard menu that contains orders, requests and some kinds of reports. In the future, the menu structure will change.

Work in the IMMLA system is based on requests. When creating a new request, the system allows you to select the type of cargo, its features, designate the start and end points of delivery, include insurance and customs services in the order cost. 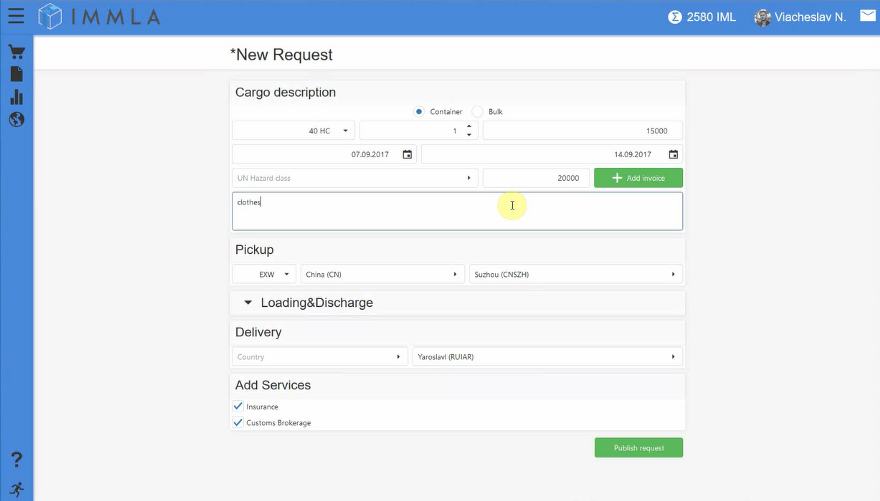 Almost instantly after placing an order the system selects offers from which it is possible to choose the most acceptable one for the consignor at the price, route, transport operator, etc. After selecting the option, it is added to the list of already formed orders, tracking of which can be observed. 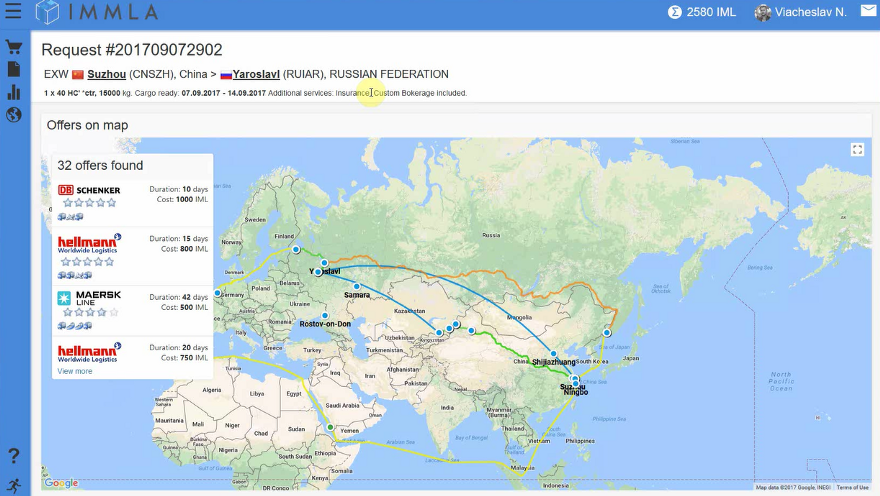 All requests are aggregated into a combined list, in which sorting by various parameters is possible: number, dates, dispatch and destination points, auction status, price.

Requests, that have found the contractor, become orders. The main functional interface contains a list of current user orders with the specification of each order and a route map of cargo traffic with the ability to track it online.

Google Maps is used for the IMMLA system, however, other public maps that are more common in certain regions (Yandex in the CIS countries, Map World in China, etc.) can be introduced into the system if they will support routing algorithms.

The order table can be freely grouped, which makes it easier for users. In addition, the ability to export the list of orders in MS Excel is integrated into the system.

You can track the movement of cargo on the map in real time. Different types of delivery are marked in different colors. The system provides the ability of online tracking of cargo in real time so that the owner has the most up-to-date information. In addition, the consignor is able to obtain detailed information about the transport on which the transportation is carried out, including an approximate date of arrival. 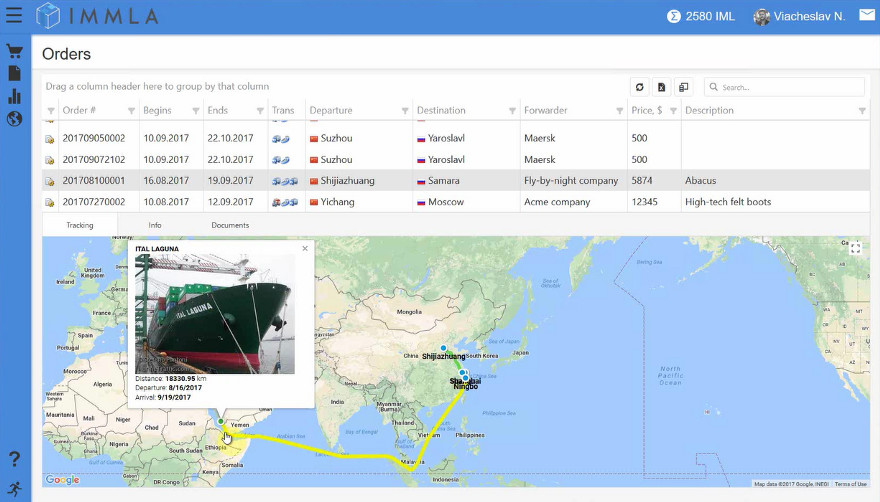 The section of documents in the IMMLA interface contains those documents that relate to the current order. The functionality includes the ability to upload an additional document and sign it with an electronic digital signature.

IML tokens are “fuel” for the IMMLA system. At the top of the system’s interface, the user’s balance in the IML tokens and the equivalent in other currencies — ETH, USD, EUR is available. The user can replenish his balance and increase the number of tokens at the user’s account settings.

The functionality of the system also includes the ability to instantly exchange messages with both IMMLA system operators and with other users.

During the operation of the system, a large array of data on transportation will be collected, which will allow the introduction of analytical tools into the system. In the pre-alpha version, it is implemented in the form of graphs for the types of cargo and the geography of consignors.

Thus, the IMMLA system, even in the pre-alpha version, is a unique IT solution for the logistics industry. The use of blockchain, smart contracts inside the blockchain and its own tokens for the operation of the system allows IMMLA to significantly reduce the amount of timing budget, financial and human resources involved in the transportation process. At the same time, the blockchain provides transparency, security, and confidence of the participants in the operation of the system.

In the IV quarter of 2017, large world companies will be connected to the system testing, and in the I quarter of 2018 it will work in a fully-featured operating mode, gradually expanding due to new modules and functionality.