Infinito Wallet proudly announces that as of the newest version update 1.15.0, it allows users to securely store, send, receive, and check transaction history of Cardano (ADA). This marks the achievement of another serious milestone in the entire cryptocurrency field: The first mobile wallet to support ADA.

As of yet, there is just one single wallet on the entire market which has support for ADA – it’s the Daedalus ADA-exclusive desktop wallet which has been officially developed and launched by the team behind Cardano.

Infinito developers have worked with the development team behind Cardano, IOHK, and utilized their official Cardano Rust project to seamlessly integrate ADA support into Infinito Wallet. Infinito Wallet can serve as an ultra light-weight, portable alternative to Daedalus Wallet for ADA holders – all while maintaining the utmost stability and security.

With IOHK’s permission and support, Infinito has contributed code to the open source Cardano Rust project for ADA mobile wallet integration and will continue such support to the Cardano open source community.

With the addition of ADA, Infinito Wallet is currently the world’s most universal home to hundreds of thousands of tokens on biggest smart contract platforms such as ETH, EOS, NEO together with leading coins including Bitcoin, Bitcoin Cash, Litecoin, Dash, ETC, and Dogecoin.

Managing Your ADA with Infinito Wallet

If you’re a first-time installer, ADA will be enabled natively on your Infinito Wallet dashboard. If you’re an existing user, you can enable ADA, following this simple guide.

Infinito Wallet is available for downloads on the App Store and on the Google Play Store. 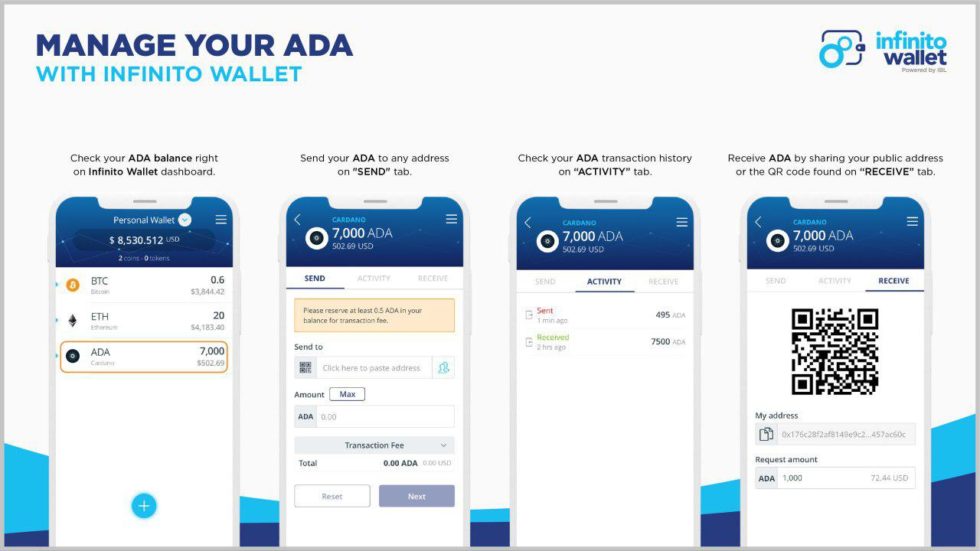 About Cardano and ADA

Cardano is a third-generation blockchain home to its native cryptocurrency called ADA. The main intention behind the platform is to deliver quick, secure, and direct transfers. Cardano is a smart contract platform which runs financial applications.

Infinito Wallet has managed to successfully position itself as a gateway for users to enhance the usage and overall potential of their cryptocurrency holdings. The team expands its partner network selectively, building an ecosystem of blockchain services which are, most of all, practical. These include exchanges, KYC and ID solutions, as well as other blockchain-related business services.

Apart from that, the team behind the wallet has intensive professional experience in the domain of distributed ledger technologies. Over 70 team members, including developers, researchers, designers, business and marketing executives, and customer service officers make sure that everything is handled properly.

Coming up next in the last quarter of 2018, Infinito Wallet plans to release the newest version of its mobile application – update 2.0. It will provide users with a brand new and better UX/UI design which will deliver further customization as well as improved user experience. It will also add full support for other blockchain networks such as Ontology, and more.

In order to provide further incentives to its users, the Infinito Wallet will be launching an array of reward campaigns, included but not limited to referral programs and Airdrops.

You can read more about the Infinito Wallet on its official website. Additionally, you can stay tuned on current and upcoming updates on their official Facebook page or join the live discussion group in Telegram in English, Japanese, Vietnamese, or Chinese to get ready for these reward programs and to receive all the latest updates on wallet feature roadmap.

What do you think of the first mobile wallet to provide ADA support? Don’t hesitate to let us know in the comments below!