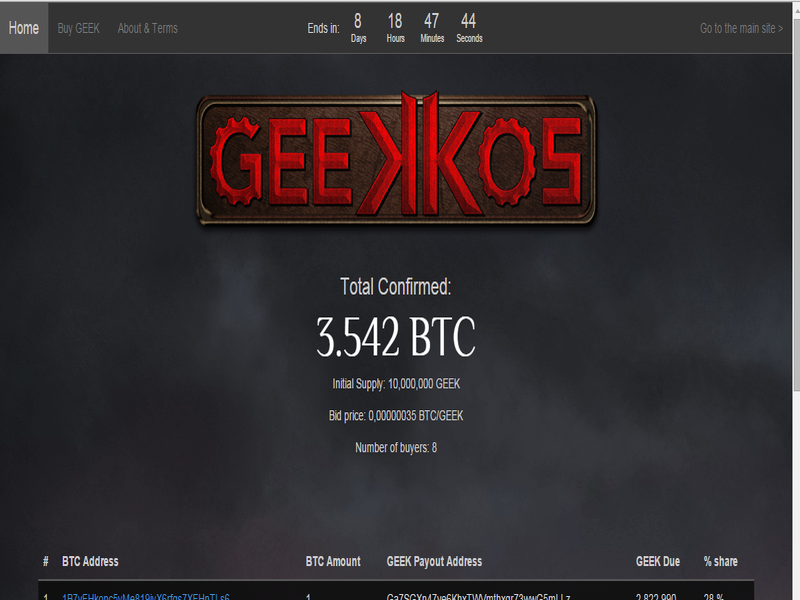 Geekkos is a project that was first introduced in November of 2014 by Twitter user @crazy_crypto, who is known for trading altcoins. He is the creator of the Geekkos altcoin and handles all business related to the coin. The coin specifications are as follows:

I reached out to Carlos in hopes of an interview and sure enough he responded. Here is the interview hosted with Carlos(@crazy_crypto)

Why did you decide to create your own altcoin?

Summarized, what does the whitepaper state regarding Geekkos?

That we have a coin and are going to develop a software, a store and a game. We are distributing this coin (called $GEEK) through a crowdsale. There are a lot of details, why it can be great, how we can reward investors and estimated dates for releases.

What innovation is brought by Geekkos?

The software called Proof of Play. It will give money to gamers, through our GEEK fund, for playing the games they already play and reward investors with the user base and advertisements combined.

Why should people invest in the gekko crowdsale?

Because we expect to give continued growth to our market due to several revenue streams. The coin

won’t rely on the bitcoin market. Also, through the crowdsale, people will be able to have more benefits, fun and an active participation in our project.

Will there be a mining period? If so, how long?

Yes and no, not in the usual way. You could easily relate the “mining” process to the distribution through our Proof of Play software, since gamers will receive staked coins from our GEEK fund proportionally to the amount of time played and the number of users playing on a daily basis. The idea is that this process won’t have an end.

What importance is that of game developing in the development of the altcoin?

I see the game development as a gift to the community. I thought it would be a great idea to mark this project as the first to make a decent game related to the crypto universe. Although we don’t want it to stop there.

How do you plan to bring interest into Geekkos?

We can bring interest from the crypto community with the game and famous characters being made already like Satoshi Nakamoto. That alone can be a hit for news sites. And we can bring mainstream interest with the software that will give money, for free, to gamers. Without them needing to know anything about crypto currencies.

Is there anything you’d like to add that people should know regarding geekkos?

Read our whitepaper, access our website. There are a lot of things there and I think you might like it.
Follow us on twitter, we’ll keep updating it regularly. Feel free to ask us any questions too, we’ll be glad to answer.Don’t forget our crowdsale is already live and that it will end in a few days.

Does crypto-currency have a place in the gaming industry? Let us know in the comments below!