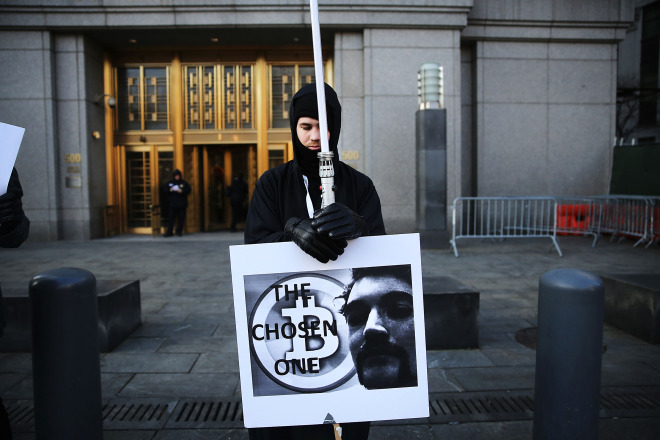 With the Silk Road trial set to proceed over the next few weeks, I managed to snag a interview with Max Dickenstein, who is seen in the featured image above. Max is a successful futures trader that specializes in commodities and currencies, including Bitcoin. When the Silk Road trial started last Tuesday, new evidence created fascinating headlines, such as Doctor Clu being arrested, as well as Ross Ulbricht’s journal being used against him in court. Hopefully, this interview will provide some insight into these recent developments.

Could you start by giving a brief summary of what is going on in the trials in the coming weeks?

So far, the prosecution is presenting it’s case which appears to consist of 3 federal agents in various departments….what is of MORE interest is the defense’s cross-examination of this particular DHS agent (he appears to be a low level customs agent who worked at O Hare, and used this case to propel his career)….they are claiming that DPR is actually Mark Karpeles, and presenting some interesting evidence to support it. I’m not willing to give my opinion on if I believe it true of not. The timeline is 4-6 weeks.

You are seen holding a light saber dressed in dark clothing, what is the motive behind this?

To make people realize that their are individuals who actually think quite highly of Ross, and that regardless of whatever actions he may or may not have taken, he is still an exceptional human being. B: It reflects my background as a futures and options trader who specializes in betting that things go down. C : My political views make me kind of unpopular, such as that I believe Silk Road should not be a criminalized operation…and I believe it a human right for anyone to create an enterprise as Ross has created. Somewhat similar to Uber.

Are you supporting Ross in other ways?

I do a lot of things behind the scenes…..I do what I think Ross needs. I highly antagonized the jury nullification types (who really annoyed the judge), and I will not say I got them to stop, but I think may have contributed to that decision on their part in an indirect way.

Do you think the new surfacing evidence that Mt.Gox founder Mark Karpeles may be associated with the Silk Road could change trials in Ross’s favor?

I do, I also think it has SEVERAL connotations for bitcoin and for Mr. Karpeles….not to say that he WAS the DPR…but it is my belief he was involved in some way now. And of course, Ross was as well.

How did you get into Bitcoin yourself?

Let’s say, originally it was to access a certain marketplace….I became committed to it once I learned of the inelastic supply in the 120 ranges. Something clicked in my head as a gold trader.

Who do you think the DPR is, and why?

It’s funny how normally I’m a quite heart on my sleeve guy, but this is an issue in which something compels me to keep information tight. [Adam] Kokesh is not DPR….but Karpeles it seems to me was clearly DPRs bank, money launderer, broker, and possible co-conspirator, or possibly the mastermind all along.

How do you think Silk Road Reloaded and implementation of I2P may affect it?

I’ve never used I2P, so I am not qualified to give an answer on this. But I think while it MAY increase security, it will come at the expense of sales volume due to accessibility issues.

Why are you supporting Ross? Many are against him, what makes you stray from the general consensus?

Ross is my idol. I think SR was going to make the world a better place, until the Department of Homeland Fascism threw it all to hell. The world was a better place with Silk Road, and convincing people of that is the only way to eliminate everything my country has fucked up in the last 40 some odd years.

In your opinion does the arrest of DoctorClu help or impede the progress of the trials as a whole?

I don’t think it’s going to have an impact one way or the other, unless the DA makes a fast deal to get DoctorClu to testify against 1.0.

Anything you’d like to say specifically to our readers?

Yes. Activism as a business is not activism….merely business.