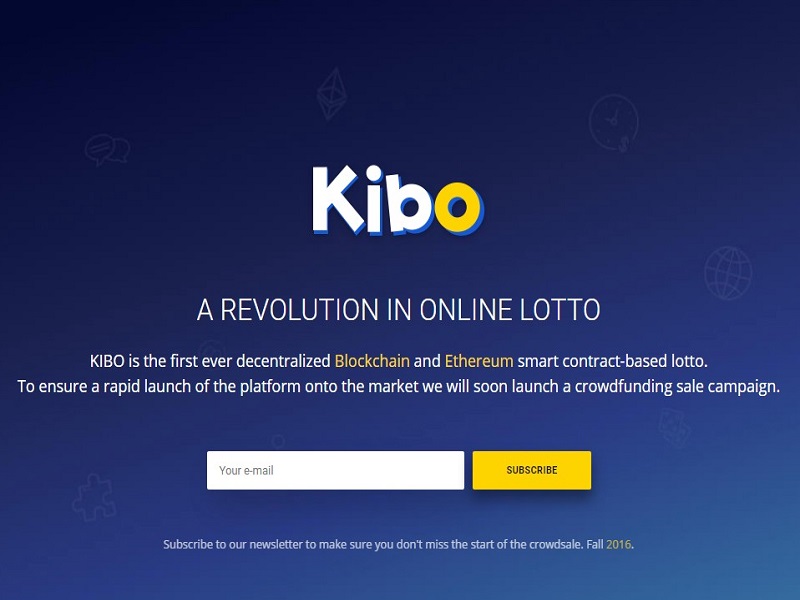 KIBO, the first ever blockchain and Ethereum smart-contract based lottery, is announcing the launch of an ICO to raise funding for the completion and launch of its platform, which it calls a “revolution in online lotto.”

Disclaimer: This article was sponsored by KIBO. Bitcoinist is not responsible for this firm’s products and/or services.

KIBO: Lottery on the Blockchain

Recognizing the fact that lotteries are the most popular form of gambling in the developed world, with over 50 percent of people in industrialized nations playing a lottery regularly, KIBO wanted to improve the gaming genre with blockchain technology.

The main goal of this new lottery platform is to use the blockchain to bring transparency to the game, as well as solve some common problems involved with lotteries — such as fair drawings, collecting winnings, and limited access to ticket purchases.

The KIBO platform aims to ensure a 100 percent fair lotto experience through the use of blockchain-based smart contracts, “whose logic and algorithms are available to anybody. Anyone can check out any transaction, any draw or any lottery,” according to the KIBO website.

Developers say that the platform’s rules and conditions are “hard-wired” into the architecture of a specially-designed smart contract that forms the basis of the lottery service. “After the network is set in motion,” the website states, the rules “cannot be changed, doctored or deleted.”

“This ensures a complete transparency of each lottery and a 100% guarantee of fair play,” the site continues.

Because the platform uses blockchain-based currency Ether, KIBO lotteries can be accessed from any place in the world, unlike traditional lottos, which are restricted by geographical location or by using local currencies. Through the power of digital currencies, KIBO lottos can be played internationally, even in areas with zero banking infrastructure — the only requirement is an Internet connection.

In traditional lotteries, it can take weeks, months or even years for winners to get their prize money. Looking to speed up this process dramatically, KIBO developers have designed a smart contract that distributes winnings automatically across the blockchain. The team also claims that transactions for winnings distribution are not subject to any fees.

In keeping with the theme of catering to an international market, the platform is currently available in 14 different languages and features the most popular lottery varieties in the European and Asian regions. According to its website, the platform will continue expanding “in every direction” as it progresses.

To fund this ambitious project, developers are holding an ICO, opening on October 1. The goal for this crowdfund is to sell 100,000,000  KIBIT TOKENS (KBT) to the public. KBT represents a stake of the platform, similar to shares of a company. After the platform’s full launch, 4 percent of its turnover will be distributed to KBT holders. The amount holders receive will be determined by the amount of tokens in their possession.

The starting ICO price for KIBITS is 100 ETH for 5000 KBT. The KIBO team says that any additional number of KBT can be bought after the initial 5,000 KBT purchase.

After the full launch of the KIBO platform, KBT will be traded on the market, its value determined by supply and demand.

At press time, the ICO has raised 94,538 ETH ($1,087,944 USD), with over 2,500 contributors. For those interested in purchasing KBT in the ICO once it goes public, additional information can be found here.

Since its start in June 2015, KIBO developers have strictly followed a development roadmap. As of July 2016, the team has completed the development and started the final testing of the platform. According to the roadmap, KIBO will fully launch in Q4 2016.

What do you think about an Ethereum-based lottery service like KIBO? Let us know in the comments below